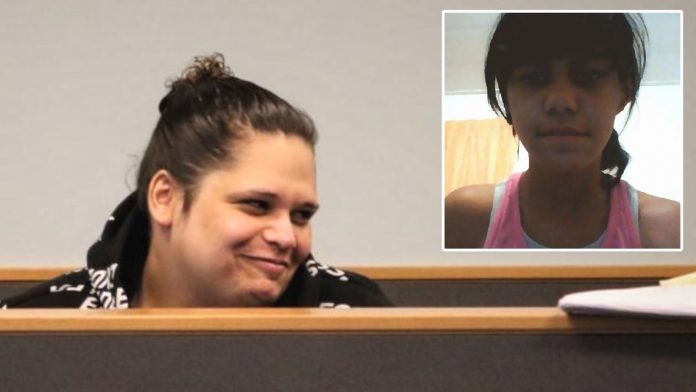 A trans-identified convict who was handed a life sentence for the senseless torture and murder of a teen girl in New Zealand has been denied leave to appeal to the Supreme Court. Toko Shane Rei Winter, who goes by Ashley, was found guilty in September 2019 of the abduction and murder of 17-year-old Dimetrius Pairama.

In July of 2018, Winter and his accomplice Kerry Te Amo kidnapped Pairama, taking her to an abandoned social assistance house in Middlemore. Two other teens were present during the five-hour ordeal, and one girl, who was 14 years old at the time, was granted immunity from prosecution in exchange for a full account of the events.

According to the girl’s testimony, Pairama was tied to a chair and stripped naked. Winter then shaved her head before one of the teenagers used a make-shift flamethrower, fashioned out of a lighter and a chemical spray, to burn her body.

“They made her sit on the chair, tied her up and shaved her hair,” she said. “Tape was on her legs, and then rope on the arms,” said the witness. At one point the detective asked if Pairama fought back, but the teen said no. “She doesn’t know how to fight… she just went with it.”

The teen explained that Winter then told Te Amo that it was his turn to beat Pairama, and that she believed she heard the girl’s bones breaking as he hit her.

The witness told the court that she had pleaded with Te Amo and Winter to stop tormenting Pairama, at which point Winter began to burn her.

“[Winter] went looking in the cupboard, there was heaps of chemicals in there. [He] found a spray, and I think it was a spray paint. [He] lit the lighter up, and then sprayed it towards the lighter and burnt her body parts,” the witness said, using feminine pronouns to refer to Winter.

Pairama was then allegedly covered in a sheet before Winter dumped chemicals on her. As the teen was laid on the ground, Winter then asked her how she would like to be killed.

“[Winter] then goes, ‘how do you wanna die, you only got till three o’clock. If you don’t tell me I’m gonna stab your throat,'” the witness said.

The two teens were then left alone together. The 14 year-old girl told the court that she offered to help Pairama escape.

“I asked her if she was alright, she said no. She goes she wants to see her nana, and that’s when I got her clothes and I gave it to her … I said get out the window and just go as far as you can, but she said she was too scared. She told me to tell [Winter] that she wants to hang herself.”

The duo fashioned a noose out of bedsheets and attempted to hang Pairama. Their first attempt failed; however, the second attempt resulted in the teen’s death. Afterwards, they dumped her body in a steel drum, where it was discovered behind the house in Māngere in July 2018.

During a three-week investigation, Winter repeatedly changed his story, with both Te Amo and Winter blaming each other for the killing. Winter initially claimed he had helplessly watched while his “best sister” was hanged by Te Amo.

In a recorded interview with authorities, Winter described Pairama as his “best friend” despite not even knowing her full name.

“I don’t know her name, probably known her for years. I just know her as ‘Sis,'” Winter claimed.

But the statement was directly contradicted by the teen witness. She told the court that Winter had been the “ringleader,” and that he had only met Pairama the day before the murder. Winter had also made repeated claims of being involved in a local gang called the Mongrel Mob.

Later on during the investigation, Winter admitted to beating Pairama because he believed the teenager was spreading rumors about him.

Disturbingly, during Pairama’s torture, a group of police officers visited the abandoned house Pairama was being kept in, seeking a former tenant who lived at the residence. Pairama was sent to answer the door, and the officers could see she was distressed and had been crying.

Winter interjected in the interaction, and told the officers she had just broken up with a boyfriend and dismissed them. During the trial, one officer told the court that he had felt Winter was “the boss” in the situation.

Crown Solicitor Natalie Walker, who prosecuted Winter and Te Amo, said that Winter was at a high risk of re-offending. “This was sadistic violence in which [he] was the ringleader,” Walker said. “[He] doesn’t accept responsibility.”

Representing Winter, attorney Matthew Goodwin made a point of telling the jury not to discriminate against Winter for identifying as transgender. He mentioned Winter’s “struggles” with “gender transition” as a mitigating factor.

“In the darkest moments of this case, one wonders whether the defendants were taking out their frustrations in their lives and that contributed to a loss of self-control,” Goodwin told the court.

However, one of Te Amo’s lawyers, Shane Tait, told the court that Winter’s biological sex was an important factor in the murder.

“In a trial involving assaults and violence it’s important we appreciate that [he’s] not in there slapping and hitting like a dainty fish; [he’s] in there with big fists and the strength of a male.”

Justice Timothy Brewer said Winter was clearly the “dominant” offender and was generally “in-charge” during the brutal slaying. He believed Winter executed the teen “because [he] found the situation exciting.”

The pair were sentenced in 2019 at the High Court in Auckland, and the verdict was unanimous.

Media coverage of the case has consistently referred to Winter as a woman and, in many instances, failed to mention his transgender status.

Winter was sentenced to a minimum of 19 years and four months in jail while Te Amo was ordered to spend at least 19 years behind bars. Both have since sought to have their convictions overturned and their sentences reduced, but their applications were dismissed by the Court of Appeal earlier this year.

On September 6, the Supreme Court also released a judgement dismissing Winter’s leave to appeal application, based on similar grounds stated previously by the Court of Appeal.

It is not clear where Winter is being detained to serve his life sentence, though a citizen of New Zealand, Sarah Fort, requested this information from the Department of Corrections (DOC) in September 2020.

In response, DOC representative Robert Jones told Fort that “the placement of transgender and intersex people in a men’s or women’s prison, including the process for a review of initial determination of placement, is managed in accordance with Prison Operations Manual.”

The New Zealand DOC website advises prison officials to “consider the support the trans person needs and wants while in prison.” Corrections staff are required to discuss a support plan with trans-identifying inmates within three days of their reception. Men who claim a female identity may be provided with prosthetic breasts, brassieres, and feminine undergarments, and they may choose to request to be searched by female officers.

In April this year, another concerned citizen requested information regarding the number of trans-identifying prisoners currently being housed in women’s prisons. Dianne Landy filed a request asking for the figures, as well as the amount of individuals who have a medium to high risk security rating.

The DOC again replied in an evasive manner, without providing the information and instead delayed their response indefinitely.