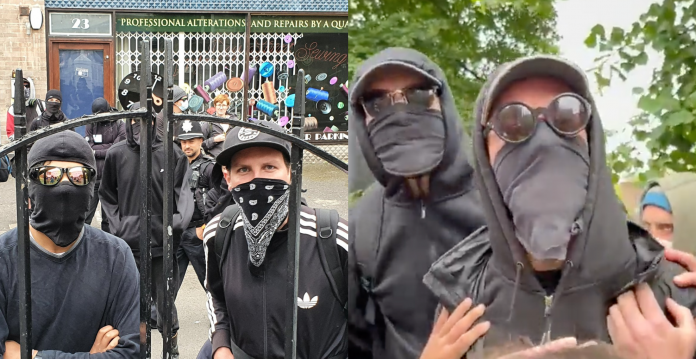 Feminists faced extreme aggression today at a pro-women’s rights demonstration in Bristol after masked activists interrupted the event, screamed obscenities, and attempted to instigate physical altercations with the women.

Popular British women’s rights activist Kellie-Jay Keen and a number of individual feminists spoke at Bristol Speaker’s Corner today on issues surrounding women’s sex-based rights. But even before the event started, there was resistance from a crowd of trans activists that gathered in counterprotest.

The event was initially delayed from starting due to the noise level of the heckling from the trans activists, and because the women did not feel safe. An organizer of the event told Reduxx the feminists requested Bristol police call-in more officers as the mob of trans activists continued to escalate their aggression.

Several of the activists, primarily males associated with Bristol Anarchist Federation, were clad in all-black and had face coverings to obscure their identity.

In one video uploaded by feminist group @thewomencov, two of the black-clad males can be heard screaming aggressively at the women gathering on behalf of their rights.

“Go home, get in the sea, die out! You’re dinosaurs! You’re going to die out! You are fossils!” One is heard yelling, while the other screamed, “You’re all abusive f*cking scumbags!”

In a different angle of the same footage, one of the activists is seen being physically restrained by a police officer who appears to be having to hold him back from moving towards the women.

Another aggressive altercation between trans activists and police was caught on film as a large faction of the group was prevented from advancing on the women.

After the Speaker’s Corner event ended, some of the women went to a local pub and were pursued by the activists as they walked with little intervention from police as the feminists were crowded around by the furious group.

While walking towards Bristol’s retail center, Kellie-Jay Keen and a few other women were seen flanked on all sides by aggressive activists in video uploaded to YouTube by Tyrant Finder U.K. As they continued, activists chanted “f*ck off, fascists!” among other obscenities at them. While some police were present, they allowed the women to be surrounded and heckled.

One of the women had her ‘Stop Erasing Women’ sign vandalized as she walked, with a trans activist slapping a pro-trans sticker on it she had to cover.

As Keen and her group arrived at the Slug and Lettuce Pub, both entrances to the venue had to be blocked-off by police to prevent further escalation as the activists attempted to enter to confront the women.

On the street outside, one male activist with a microphone began speaking to the crowd on the supposed dangers of the feminist’s ideologies by claiming they were going to attack other groups’ rights: “Once they are done with trans people, they will come for Queers, they will come for the gays! Once they are done with them, it is only a matter of time until they come for women and Black people!”

At one point, the pub was force to shut down due to continued heckling and threats by the crowd of trans activists. The women inside were escorted out by police in what one of the attendees described as an “evacuation.”

“Never been evacuated from a pub before,” feminist Bo Novak wrote on Twitter, “Bristol, what a disgrace. Women everywhere watching, this is why we need to raise our voices and protect our rights, including our right to speak.”

Speaking with Reduxx, one of the organizers of the Speakers Corner event says the aggression from the mob of trans activists left some of the women “in tears.”

Women’s rights activist activist Iris, known on Twitter as @EcuadorianMum, told Reduxx she wasn’t surprised by the reaction from the activists, but felt Bristol police had failed in their duty to protect the feminist speakers.

“They asked the aggressors to step back when necessary but would not actually prevent them screaming in women’s faces, they watched it happen,” Iris says, “Our other stewards had to step in to stop it.”

Iris says the stewards were volunteers, some of which with past policing experience, who took on the specific role, but that it wouldn’t have normally included such close-contact security work. A few were involved in altercations, but Iris says none were injured.

“There was a couple of assault attempts. The first one [was] more of a fisticuff when there were no police around and we had to manage ourselves. Second time there was some pushing by some teens, the police stepped in and pushed them back bit.”

Once the women had arrived to the bar, Iris says it wasn’t long before police informed her they were making the decision to shut the venue down under a public order directive.

“I had to run in and let everyone know not to buy anymore drinks, as they were just trying to relax. I had to let them know not to do that because we were being kicked out.” Iris believes it was because Bristol police were unwilling to disperse the mob of trans activists.

“Despite [the trans activists] trying to prevent us from speaking, we still managed to do it. It was hard work for some of us, but the event was a success in that everyone got to speak and everyone got to hear the speakers,” Iris continued, “They’ll never really stop us.”

This isn’t the first pro-woman event that has been met with violence in the United Kingdom in recent weeks.

On May 15, footage from a feminist event at Manchester Speaker’s Corner went viral after a trans activist was caught on camera physically assaulting a woman. The assailant was part of a black-clad gang preventing feminists from getting near a statue of suffragette Emmeline Pankhurst.

Manchester Trans Rise Up had sent a number of “security” guards to prevent women from getting close to the statue of the iconic women’s rights activist, who also vandalized her likeness by draping it in trans-colored ribbons and flags.

At one point during the event, a lone feminist approached the statue, seemingly with the intention of placing a flag baring the colors of the suffragette movement near it. But she was instead roughly grabbed by a masked male, who physically prevented her from advancing.