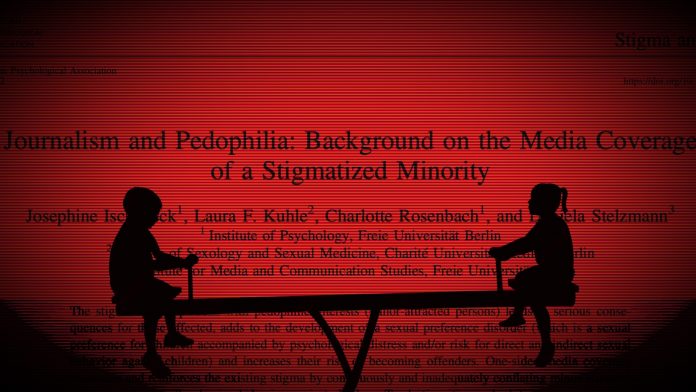 A 2021 research paper from German academics called upon journalists to work towards “destigmatizing” pedophilia in their coverage of child sex abusers, which they declared a “stigmatized minority.”

In January of last year, four researchers from two German Universities published a paper in the American Psychological Association’s peer-reviewed Journal of Stigma and Health. The paper, titled Journalism and Pedophilia: Background on the Media Coverage of a Stigmatized Minority, argued that journalists covering child sexual abuse “overestimated the risk [of] minor-attracted persons” harming children.

The paper was based around a small study wherein researchers interviewed 11 journalists from German-language media and attempted to discern their opinions on pedophilia, and whether they were willing to strive towards “ethically sensitive” reporting on the subject. Those they surveyed were largely open to providing more sympathetic coverage, which the researchers stated “could be a first step toward destigmatizing pedophilia.”

The researchers write that “society can and should create a social environment in which minor-attracted persons can accept their sexual interest without fear of disadvantages.” They also suggest that media outlets could be provided guidelines with “facts” on pedophilia, including how it is an immutable sexual preference — one they appear to describe as similar to homo- and heterosexuality.

Throughout the paper, the researchers refer to pedophilia as a “sexual preference” and call pedophiles “minor-attracted people” in a stated attempt to avoid “negative [and] punitive attitudes.” They reference Dr. Fred Berlin in their choice of language, a controversial psychiatrist who was mentored by John Money.

Berlin is infamously known for protesting against a law that required mental health professionals to alert police when they were aware a client was actively sexually abusing a child. Berlin managed to gain an exemption to that mandatory reporting law for his clients for a period of time, something which sparked outrage amongst child safeguarding groups.

Berlin’s stealth in-patient sex offender clinic at Johns Hopkins, which shared a floor with a general mental health unit, once led to a teenage girl being raped in her hospital room by one of Berlin’s patients while she was being treated for depression. Berlin also worked with convicted child rapist Michael Melsheimer to create an advocacy organization that Melsheimer explicitly stated was intended to normalize pedophilia.

Allyn Walker, a now-disgraced ex-instructor at Old Dominion University, was also cited extensively in the paper. Walker came under fire last year after participating in an interview with Prostasia, a charity that purports to be for child safeguarding advocacy but primarily dedicates effort to defending pedophiles. Walker was ultimately forced to resign from her position at ODU after prolonged public backlash.

Journalism and Pedophilia also attempts to assure readers there is a clear differentiation “between a sexual preference for children and sexual abuse of children,” but does not indicate precisely what the researcher’s working definition of “non-offending” is.

In the case of Walker and Berlin, pedophiles viewing child sexual exploitation material without directly abusing a child physically are considered “non-offending.” Their views are a sample of a growing body of academic literature which insists pedophiles must be given access to “fantasy outlets” for their desires, despite research showing such exposure often leads to pedophiles seeking out actual children to abuse.

This is just latest in what appears to be a marked increase in openly sympathetic views towards pedophiles at the academic level, with multiple incidents being reported over the past year alone.

On February 5, State University of New York Professor Stephen Kershnar was placed on off-campus duties after clips from a podcast he’d done resurfaced showing him actively defending adult sexual contact with children, including those as young as 12 months old.

Even more recently, an academic critical of pro-pedophilia sympathies within Universities had his research scrubbed from The British Journal of Sociology and History just 24 hours after it was first published due to a complaint from Prostasia.

Dr. Alaric Naudé of Suwon University in South Korea told Reduxx that pushes for “destigmatization” with the alleged intention of “preventing offending” were dangerous to children and unsupported by research.

He also noted that claims about “minor attraction” being an innate sexuality, like those advanced in Journalism and Pedophilia “actually [make] it more difficult for pedophiles to direct their desires away from children.”