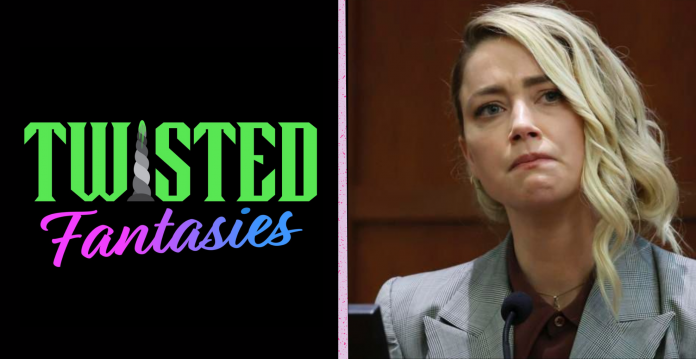 The sex toy was made in direct copy of testimony Heard had given while on trial that her former husband, actor Johnny Depp, had sexually assaulted her with a liquor bottle during a trip to Australia in March 2015.

Almost immediately, the company was met with responses from outraged netizens uniformly expressing disgust at the product. At the time of this article’s publishing, the tweet has only 33 ‘likes’ but has wracked up over 250 replies and 392 primarily-negative quote tweets.

“THIS is why making a woman testify about sexual assault, live, in front of the whole world was a crime against humanity. Whether you believe Amber or not, many people have been raped with bottles. To make fun of woman’s story of being raped by a bottle is an insult to them all” one user wrote in the comment section.

“I hope this puts you out of business,” another replied to the post.

Some even stated that they had intended to purchase from the company but had cancelled their orders in response to the post.

Canceling our orders, thanks for helping is dodge the bullet that is your company!!

On Instagram, the reactions were no different, as most found the item distasteful and disrespectful.

Twisted Fantasies is an independent sex toy shop registered in Florida. The company was incorporated in May 2021, and specializes in the sale of a number of bestiality-themed sex toys.

Addressing the rapid-fire backlash, Twisted Fantasies posted a statement on their Twitter account, attempting to defer responsibility to Amber Heard. The company apologized if any survivors of sexual assault found the product triggering, but stated they will still stand by it as a “tongue [in] cheek way to support Johnny Depp.”

In a follow up statement to the Daily Dot, the company stated they were in the process of changing the product’s name and removing all references to the court case.

“If the product triggers sensitivities for people that have gone through sexual violence and personally related to Amber’s claims we apologize tremendously,” they continued.

Speaking with Reduxx, Jaimi Shrive expressed that this incident is part of a wider trend of attitudes towards female victims of sexual abuse.

“We’ve seen many businesses capitalize on Amber Heard’s abuse, and I think this is the most symbolic of how society actually feel about male sexual violence against women,” Shrive says, “It is simultaneously sexualized, trivialized, and denied.” Shrive said.

Shrive is Head of Research & Development at VictimFocus, an organization which provides trauma-informed training with the aim of supporting victims of abuse, violence, and trauma across the globe.

Shrive believes that the Depp-Heard trial “was not publicly broadcast by accident,” and has played a direct role in feeding into harmful views, myths, and attitudes about violence against women that are already widespread.

“Amber Heard has become a personification of this,” Shrive says, “One day we will look back not only on the injustice she has faced, but also on the abhorrent part society has played in furthering her abuse.”

Depp had sued Heard for $50 million over liable after Heard had written an op-ed in The Washington Post titled: “I spoke up against sexual violence — and faced our culture’s wrath. That has to change.”

Heard was found guilty of defamation for this statement despite it not directly naming her ex-husband. During the trial, two other statements were found to have defamed Depp, neither of which named him: “Then two years ago, I became a public figure representing domestic abuse, and I felt the full force of our culture’s wrath for women who speak out,” and, “I had the rare vantage point of seeing, in real time, how institutions protect men accused of abuse.”

Heard won one counter claim against Depp, but Jurors awarded him $15 million in compensatory and punitive damages. Heard plans to appeal the verdict.

Depp had previously lost a similar defamation case against UK-based tabloid The Sun in 2020 after the outlet had labelled him a “wife beater.” The judge in the case had found that 12 out of the 14 incidents of domestic violence had occurred, meaning the “wife beater” claim by The Sun was not defamation.

“Taking all the evidence together, I accept that [Heard] was the victim of sustained and multiple assaults by Mr. Depp in Australia,” said the Judge at the time.

Depp had lost permission to appeal the verdict, with a judge refusing his application and stating that his appeal had “no real prospect of success.”

Heard’s former personal assistant, Kate James, has previously accused Heard of stealing her “rape survival story” in 2020 after Depp lost his libel case to The Sun. However, many have noted that the two sexual assault narratives differ greatly.

Reacting to the controversial post by Twisted Fantasies, Journalist Eve Barlow, a close friend of Heard’s, responded to the post saying “Rape is not sexy.”

Professor at the Stanford Law School, Michelle Dauber also condemned the post calling it “highly offensive.” Both Barlow and Dauber were outspoken in support of Heard during the defamation trial and received harassment as a result from Depp supporters. Barlow described herself as a victim of “online terrorism.”

Dauber also said: “[I have received] dozens of harassing calls from men screaming obscenities because I criticized the conduct of the trial and the verdict against Amber Heard.”