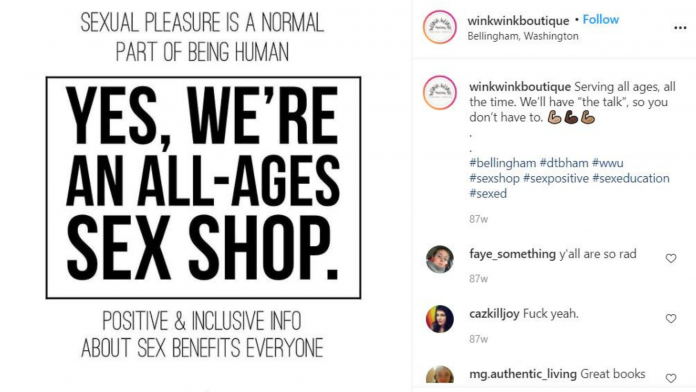 Wink Wink Boutique is run by Bellingham School District board director Jennifer Mason. An image posted to the store’s Instagram account advertises an event aimed at children aged “0 to 18 years old.” Other photos shared to social media depict products on display inside the shop, which include sex toys and fetish gear.

“We believe that normalizing, accepting, and affirming all bodies, identities, and gender experiences is an inherently political act. Pleasure is our revolution,” reads Wink Wink’s website.

Among the publications sold at Wink Wink is a manual titled Sex Positive Talks to Have with Kids by Melissa Pintor Carnagey, a sexuality educator who uses she/they pronouns. The book provides tips for discussing sex with children of all ages.

In a section of the manual titled “Birth to Age 3,” Carnagey suggests replacing the words of a children’s song with words for genitals, saying: “The next time you sing Head, Shoulders, Knees and Toes, add some genital anatomy terms to make it sex positive.”

Recommendations for children aged 4 to 8 include “teaching about the importance of privacy when enjoying the pleasures of self-touch” and provides a brief script for introducing the topic: “It’s so important that we get to know and respect our body, especially the parts that we usually keep private behind clothes. Let’s do an activity that helps us learn more about genitals.”

Another book available through Wink Wink Boutique is Trans + Love, Sex, Romance, and Being You, co-written by Kathryn Gonzalez, a trans-identified male who describes previously believing himself to have been a gay man prior to deciding to identify as female.

Mason also sells breast binders for girls and ‘penis packers‘ for teens — silicone members intended for adolescent girls — and provides in-store fittings. In addition, she sells ‘transmasc pumps‘ designed to extend female anatomy by means of suction; included with the product is a ruler to measure size.

A sex education book posted to the shop’s Facebook page gives illustrated instructions on “hand techniques for girl-dick” which refers to men as “non-op trans women,” and refers to women as “vulva-havers.” It also calls male genital anatomy a “trans clit.”

Last May, parents of first graders at a Bellevue elementary school raised concerns about gender identity ideology being taught in the classroom after they had learned that the book I am Jazz was read to young children. The book illustrates the “transition” of a two-year old boy. Parents’ complaints were dismissed by the school board and by Mason.

Bellingham school board president Jennifer Mason sells I Am Jazz in her “all-ages” sex shop, along with coloring books aimed at children which promote gender ideology.

Marci Bowers, the trans-identified male surgeon who performed genital surgeries on Jazz Jennings, has admitted that children who had been medically “transitioned” beginning at or near the age of eleven years old went on to lose healthy sexual functioning.

“Every single child who was, or adolescent, who was truly blocked at Tanner stage 2,” which is the beginning of puberty, “has never experienced orgasm. I mean, it’s really about zero,” Bowers said in a panel talk for Duke University.