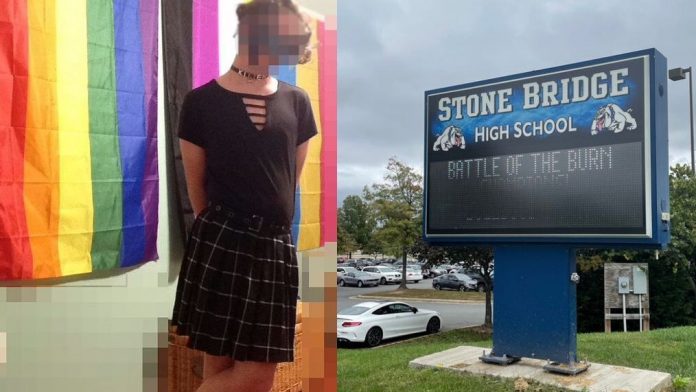 Bombshell news out of Loudoun County, Virginia, where the Judge responsible for sentencing the the “skirt wearing” teen boy at the center of two rapes in two separate county schools has reversed her decision to place him on the sex offender registry.

According to local WTOP News, the Judge overseeing the case has reconsidered her original verdict, and is now no longer requiring the 15-year-old to register as a sex offender.

On January 12, the boy had been sentenced to three years in a locked juvenile residential rehabilitation program, with the Judge ordering him to register as a sex offender for life upon his 18th birthday. At the time, the Judge noted that she had never ordered a juvenile onto the registry before.

Now, the still-unnamed teen won’t be required to register at all, and will complete his three years of supervised probation at which point he will be freely released into the community. The reason behind this reversal appears to be technical in nature, with defense attorneys arguing that prosecutors failed to provide a written motion that they would seek to have the teen placed on the registry before the Judge made her ruling.

In announcing her decision, the Judge said she made an “error” in the initial ruling, and apparently cited studies that “adolescent brains don’t stop developing till age 27.”

The ruling for the teen to remain in a locked facility until his 18th birthday was maintained, as well as the order for the boy not to have any contact with the victims or their families. But further negotiations from the prosecution on the sex offender registration were rejected.

During the January 12 sentencing, the Judge noted that the boy had “one of the most disturbing” psycho-sexual evaluations she’d ever seen, going on to say: “You scare me. What I read in those reports scared me, should scare families and scare society.”

The second incident occurred just months later, while the boy was allegedly meant to be on house arrest. The parents of the first victim later discovered he had simply been transferred to nearby Broad Run High School fitted with an ankle monitor, and on October 6, the boy was picked up by police at the new school and was charged with sexual battery and abduction.

According to police, he forced a girl into an empty classroom, held her against her will, and touched her inappropriately. He was ultimately remanded to a youth detention center.

The boy was found guilty of the first assault, and pleaded “no contest” to the second.

Loudoun County became a hotbed of discussion and international media attention after the father of one of the victims spoke to media about what had happened to his daughter. Scott Smith had previously been physically ejected out of a school board meeting by police after mentioning his daughter’s assault and being accused of lying.

The school board at the center of the controversy was ultimately found to have attempted to brush the sexual assault under the rug in order to not attract attention, as well as proceed with the advancement of their proposed policies that would enshrine the ability for students to use whatever bathroom they desired based on gender identity alone.

The vote regarding the “transgender student rights” self-identification policies occurred on August 11, 2021, and were approved in a 7-2 passing. The two opposing members of the Loudoun County School Board were John Beatty (Catoctin) and Jeff Morse (Dulles). As far as Reduxx is aware, none of the policies instituted that day have since been amended or rescinded.