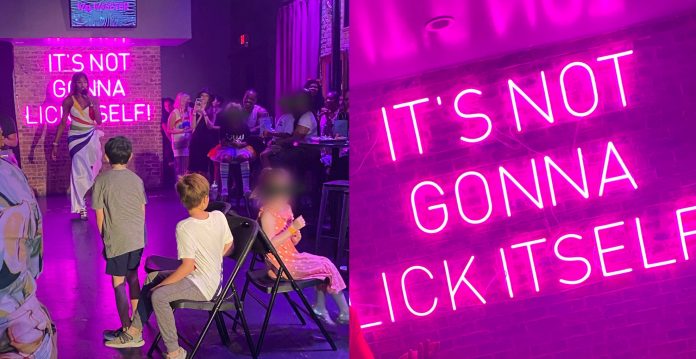 Videos of ‘drag queens’ performing provocatively for an audience of children at a bar are going viral on Twitter, prompting massive backlash and raising concerns about child safeguarding.

According to the EventBrite announcement, the show was advertised by the venue as “a … spin off of our famed Champagne Drag Brunch,” and promised to provide “the ultimate family friendly pride experience.”

But footage from the event is raising eyebrows on social media as many note it appears to have been anything but.

In one clip taken by an audience member, a drag queen in a latex-style bodysuit and thigh-high boots is seen dancing and performing the splits in front of an audience including several children before approaching a little girl to accept a cash ‘tip.’

This wasn’t the only video of the provocatively-dressed male performers accepting money from the children.

In another, a different drag queen is seen similarly accepting money from a little girl in a similar fashion as a dancer in a strip club.

In a video posted to Mr. Misster’s Instagram story, yet another performer, even more scantily clad, laid out on the floor in front of the children, gyrating on the ground before lying flat and spreading his legs.

Children’s participation wasn’t limited to watching from the sidelines. At one point, an announcer invited the kids up to dance in the designated area either on their own or with a drag queen.

“Do you want to hit the stage with the queens? We have five limited spots for young performers to take the stage solo, or with a queen of their choosing! Come hangout with the Queens and enjoy this unique pride experience, fit for guests of all ages!”

Disturbingly, a prominent neon backlit with a sexually suggestive slogan was not removed or turned off in the presence of the young audience members. Framing the stage, a sign reading “It’s Not Gonna’ Lick Itself” was in clear view of all, including the children.

Other photos from inside the venue reveal additional signage that was not caught by the cameras, with the bar having another which reads: “I licked it so it’s mine!”

The event had been subject to protests by right-wing advocacy group Protect Kids Texas, which stated on Twitter that they had 80 people outside of the venue voicing their concerns. They also posted a video showing police at Mr. Misster, and reported they had escorted children from the building.

Since beginning to circulate on Twitter, the videos from the event have prompted serious backlash from netizens, with many pointing out the inappropriate nature of the show and venue for children.

Beneath the breaking Tweet posted by independent journalist Tayler Hansen, hundreds of replies have accumulated expressing frustration and concern for the lack of safeguarding in place.

“Kids don’t need to see this. Tolerance has a line,” wrote one user, with another replying: “This not an appropriate environment for minors. It makes one wonder, what else have these children been exposed to by their parents?”

One response even noted that Mr. Misster may be in violation of the Texas Alcoholic Beverage Commission licensure code if they are a designated 18+ establishment, and encouraged others to contact the Commission and file a complaint.

Why are people not filing complaints with the TX ABC?

If this is a venue that is suppose to be 18 or 21+ only this is a violation of their ABC license.@TexasABC

If the PD gets ABC grants why is the PD non-responsive?
Seems like any PD ABC grants should be revoked.@GovAbbott

The viral videos even caught the attention of prominent YouTuber June Lapine, known by her social media handle @sh0eonhead.

“I don’t like being gaslit about how totally not weird this is,” she wrote, adding: “Leftists stop being scared to point out that the emperor has no clothes because you fear being called a reactionary.”

In May, footage from the DragCon LA convention sparked similar backlash to that towards Mr. Misster after it was discovered that children had performed on stage with the drag queens, collecting cash ‘tips’ from the audience as they danced.

The “Drag Kid” phenomena has similarly raised eyebrows amongst concerned adults, with many noting that drag performances are inherently sexual in nature. In some cases, “Drag Kids” as young as 11 have been recorded performing for adults in clubs.

Most recently, a 15-year-old boy was lauded in British media for his drag persona “Cherry West,” which he began to develop after his father brought him to a drag bar at age 10.