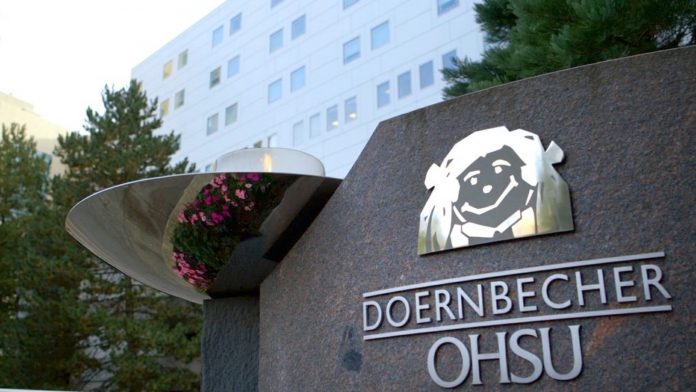 A top pediatric hospital in the United States is raising concerns after it was discovered providing “tucking” and “chest binding” information guides, one of which included contact information for a sex toy store that would make exceptions for minors.

The Doernbecher Children’s Hospital in Oregon contains a gender services clinic that describes itself as providing “a full range of services for transgender and gender-nonconforming children and teens.”

The clinic takes patients “through age 18,” and states that it commonly begins providing medical gender affirming treatments around age 10, but that it is willing to create appointments for children and their parents before then.

On its website, the clinic provides a few official handouts — but its those on “tucking” and “chest binding” that are prompting online criticism. The handouts appear to have been made in 2020.

Tucking is described as “moving the penis, testicles, or both out of the way. This makes the genital area look smoother and flatter.” In the handout, the Doernbecher Children’s Hospital provides information on how to flatten male genitals with tape, how to push the testicles inside the body, and notes that “some discomfort is normal.” It also says that “people of all genders can tuck.”

Within the details titled “putting your testicles inside your body,” which provide instructions on how to push the testes into the inguinal canals, it reads: “If you find yourself getting aroused, take a break and try again later. An erection will make it impossible to tuck.”

On one page, it prominently features a website address for a lingerie store dedicated to selling hip and bum padding, tucking panties, and body shaping supplies for crossdressers. It also directs the presumably underage readers to a sex toy store in Portland which apparently makes exclusive appointments for underage shoppers.

“SheBop is a sex-positive shop in Portland. They sell gender-affirming clothing items as well as sex toys, videos and more. The shop is for people age 18 and older, but they offer appointments before or after hours for younger shoppers. You can schedule an appointment by calling them or emailing info@sheboptheshop.com.”

In another Doernbecher handout, similar instructions for girls on how to bind their chests are available. Chest binding is described as “wrapping something around [the] chest to flatten your breasts.”

According to a 2017 study by Johns Hopkins and Boston University School of Medicine researchers, 97% of females who bound their chest experienced at least one negative health outcome, while 51-52% of them reported respiratory problems, and 47-49% reported musculoskeletal symptoms, like postural changes, muscle wasting, or rib fractures.

Interestingly, the “chest binding” handout does not provide any note of “discomfort” being expected or normal, such as in the “tucking” handout, and also does not direct the youth readers to any lingerie or sex toy stores.