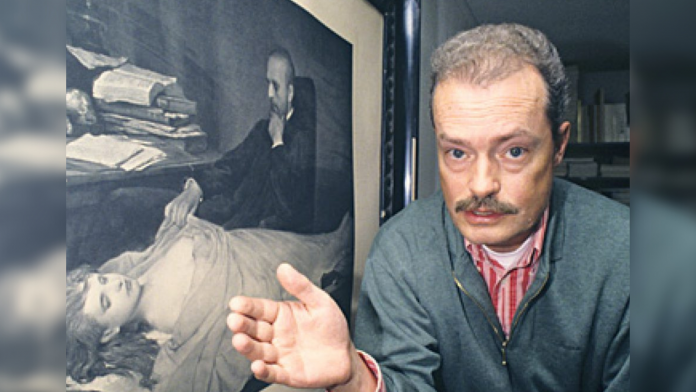 The sexologist who came up with “cis” also claimed “there’s nothing wrong with pedophilia.”

The term “cis gender” has gained widespread popularity in recent years, largely due to a push from trans activists who define the word as the opposite of “transgender.” However, few users of the term are aware it originated with a German sexologist who also believes pedophilia is a sexuality.

A 1991 publication by Volkmar Sigusch, titled Transsexuals and our Nosomorphic View, is credited as the first published instance of the term “cisgender” as an antonym to transgender.

Sigusch is a German sexologist, physician, and sociologist who served as the director of the Institut für Sexualwissenschaft (Institute for Sexual Science) at the clinic of Goethe University, Frankfurt am Main, from 1973 – 2006.

“Cisgender” is now widely used to refer to people who are said to have a “gender identity” that matches their sex. However, the more accurate translation from Sigusch’s German coinage “zissexuell” is “cissexual”, though now “sex” — referring to either sex organs or sexuality — has been replaced by the vague and subjective term “gender.”

“Speaking of cissexuals. If there are transsexuals, logically there must be cissexuals. One is not to be thought without the other at all. I have allowed myself to introduce the terms cissexualism, cissexuals, cisgender etc.,” Sigusch wrote in 1991.

“The genuinely neological characteristic of transsexualism is that it casts what I have referred to as cissexualism, actually its logical counterpart, in a highly ambiguous light. For if there is a trans‚ a beyond (physical gender)‚ there must be a cis‚ a this-side -of‚ as well,” Sigusch wrote in 1998, referring to his 1991 article.

The sexologist’s views also include controversial opinions on pedophilia. Sigusch distinguishes between pedophiles who abuse children, and “pedosexuals,” who have the same impulses but do not follow through with them.

In a 2011 interview with Spiegel, Sigusch stated that the problem with “pedosexuals” is not their desire to abuse children, but acting on that impulse. He proposed that the best outcome for treating pedophiles is not the loss of their desire, but instead preventing them from having “contact” with children.

Sigusch’s claims resemble modern rhetoric around “virtuous pedophiles”, or “MAPs” (minor-attracted persons), which prioritize the feelings and needs of men who are attracted to children, rather than focusing on child safeguarding.

Looking at the history of pro-pedophilia policies and attitudes in Germany during the 60’s – 80’s, it’s clear that Sigusch is far from an isolated advocate, and that he was simply attempting to popularize ideas that already existed.

One key figure behind an open cultural acceptance of pedophilia in Germany was Volkmar Sigusch’s contemporary, the Berlin-based sexologist Helmut Kentler. Kentler placed foster children in the homes of pedophiles beginning in 1969 for the purpose of facilitating child sexual abuse, a project later known as the “Kentler Experiment” or the “Kentler Project.”

This experiment was authorized and subsidized by the Berlin Senate. In 1988, nearly two decades later, Kentler described the project as a “complete success” in a report he submitted to the Senate.

Dr. Joachim Häberlen of the University of Warwick, in his article, “Feeling Like a Child: Dreams and Practices of Sexuality in the West German Alternative Left during the Long 1970s,” says:

“In 1970 members of the German parliament charged with reforming criminal law even listened to radical education scholar Helmut Kentler, sexologist Volkmar Sigusch, and other sociologists and psychologists, who declared that children would not suffer from sexual relations with adults and that those relations should not be punished, because they are a ‘crime without a victim.’”

In 1972, Dutch pro-pedophile activist Dr. Frits Bernard published a paper titled, “Pedophilia – a Disease?” which concluded that “Pedophilic contacts do not damage the psychic development of a child.” According to Dr. Sonja Levsen, in her essay, “Pedophile Apologism in the 1970’s,” Volkmar Sigusch was one of the “advisory scientists” on Bernard’s research.

According to Dagmar Herzog, author of Sex after Fascism: Memory and Morality in Twentieth-Century Germany, Volkmar Sigusch and his colleague Gunter Schmidt, with whom he published research on child sexuality in the 70’s, also argued that exposing children to pornography – a well-known grooming tactic of pedophiles – was completely harmless.

“Volkmar Sigusch and Gunter Schmidt argued provocatively that the representation of sex, per se, did no damage to youth or children, and that the kind of pornography in which sex was ‘represented without prejudices as a pleasure-filled social activity … is exactly the kind that one could without worries give to children and adolescents,’” Herzog wrote.

In 2010, Sigusch published “sexology theses on the abuse debate” wherein he lauded the “paradise of childhood,” and claimed that “adding taboos to childish eroticism creates what we all want to prevent: sexual violence.”

“There is nothing wrong with pedophilia in the sense of the word, that is, against liking, even loving, children,” wrote Sigusch. “The sensuality that spontaneously unfolds between a child and an adult is something wonderful. Nothing can remind us more intensely of the paradises of childhood. Nothing is purer and more harmless than this eroticism of the body and the heart. Childish eroticism is not only full of delights, it is also necessary.”