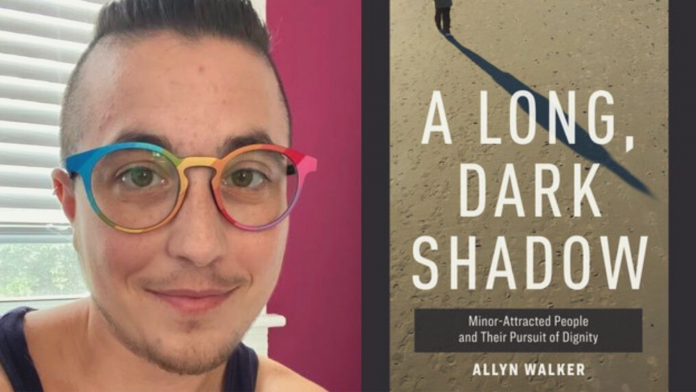 A Johns Hopkins-affiliated public research center is facing backlash after hiring an instructor who was forced to resign from their University after defending the “dignity” of “minor attracted people,” and entertaining theories about giving pedophiles “high quality child pornography.”

On May 12, the Moore Center for the Prevention of Child Sexual Abuse announced that disgraced Old Dominion University instructor Allyn Walker would be joining the Center as a postdoctoral fellow.

Walker, a female-to-male transgender who identifies as non-binary, was the subject of widespread controversy last year after she sat down for an interview with Prostasia – a registered 503c which many have called “pro-pedophile” for their stances on legalizing child-like sex dolls and routinely comparing pedophilia to a sexuality.

Walker was an assistant professor of sociology and criminal justice at Old Dominion University in Norfolk, Virginia, and had interviewed with Prostasia’s now-defunct podcast in November to promote her book titled “A Long, Dark Shadow: Minor Attracted People and Their Pursuit of Dignity.”

In the interview, Walker stated she used the term “minor attracted people” out of consideration for pedophile’s feelings, noting “… I think it’s important to use terminology for groups that members of that group want others to use for them.” She also stated that “MAP advocacy groups like B4U-Act have advocated for use of the term, and they’ve advocated for it primarily because it’s less stigmatizing than other terms like pedophile.”

While Walker initially noted in the interview that she was not seeking to answer the question of whether or not she considered pedophilia a sexual orientation, her later comments suggest she did place it on a similar spectrum.

At another point in the interview, Walker stated she “sort of empathize[s]” with pedophiles because of identifying as Queer.

Word of Walker’s interview with Prostasia spread like wildfire, with many expressing outrage that a University instructor was portraying pedophilia in a sympathetic light.  Copies of Walker’s PhD dissertation quickly began to circulate, showing Walker had entertained theories regarding allowing pedophiles to access “high quality child pornography” in belief it may reduce offending.

The backlash was so severe that Old Dominion University President Brian O. Hemphill was forced to issue a statement just days after the interview was released, and soon after placed Walker on administrative leave. On November 26, a joint statement issued by ODU announced that Walker was resigning from ODU. In it, Walker blamed media as well as transphobia for “mischaracterizing” her work.

Dr. Naudé is a Professor focused on social sciences and linguistics at Suwon University in South Korea. In February, he had his research on Prostasia removed from The British Journal of Sociology and History just 24 hours after it was first published after the organization pushed the Journal to remove it.

The article, titled A Case Study via Sociolinguistic Analysis of [a] Covert Pro-Pedophilia Organization Registered as a Child Protection Charity, focused on how Prostasia claimed to be for child protection but built a narrative framing pedophiles as victims of “an oppressive social structure.” Dr. Naudé found that many organizations “claiming to want to protect children” had “linguistic markers [denoting] that something else was their intention.”

Dr. Naudé emphasized how the Moore Center’s partnership with Walker demonstrated a microcosm of a much larger issue.

“The example of Dr. Walker being welcomed along with her ideology to the Moore Center is a piece of a puzzle. The parts of the puzzle continue to come together to give us a clearer picture of the pro-pedophilia agenda being pushed by an unholy triad of academia, psychology associations and pseudo-child protection groups,” Dr. Naudé asserted.

“The façade of safe guarding and child protection that fosters pedophilia as a sexuality is now becoming a perverse parody which if left will eventually result in pedophiles becoming a protected group. This will be a disaster for decades of work attempting to eradicate the pestilence of child abuse in society,” Dr. Naudé said.

Last fall, while Walker’s views were being lambasted by the media, director of the Moore Center Elizabeth Letourneau published an op-ed in The Washington Post defending her. In the op-ed, Letourneau states she also prefers ‘minor attracted person’ to ‘pedophile.’

The Moore Center for the Prevention of Child Sexual Abuse is affiliated with the John Hopkins medical establishment, which has a long history of endorsing theories related to child sexuality in addition to promoting transsexual surgeries.

John Money, who coined the term “gender identity,” was a sexologist and psychologist who founded the Gender Identity Clinic at Johns Hopkins University in 1966 and started an extensive research program on the medical treatment of sexual paraphilias and on “sex reassignment” procedures.

Dr. Fred Berlin, a controversial psychiatrist who was mentored by Money, had a clinic within Johns Hopkins until the mid-1990s. Berlin is infamously known for protesting against a law that required mental health professionals to alert police when they were aware a client was actively sexually abusing a child.

Berlin managed to gain an exemption to that mandatory reporting law for his clients for a period of time, something which sparked outrage amongst child safeguarding groups.