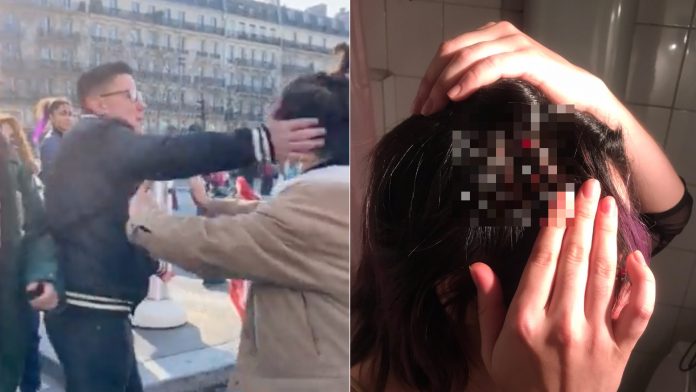 International Women’s Day 2022 may go down as one of the most violent in recent history, with an unprecedented number of brutal attacks being documented against feminist demonstrators committed by trans- and “sex work” activists.

Sex industry abolitionist feminists in Barcelona were confronted and threatened by “people in favor of prostitution.” The women had gathered for a protest planned by Catalunya Abolicionista Plataforma Feminista (CATAB) in Plaza St. Jaume, where they were surrounded by counter-protestors who attempted to assault them, but were prevented by police.

Some trans activists took to Twitter to threaten violence, saying, “The 8th of March is going to be the day for me to shut the mouths of TERFs by any means necessary, including physical [force].”

Another boasted, “Women’s Day is the national day of beating TERFs, so you will see us attacking more than one [of them] today.”

In Paris, a collective of women opposing the sex industry – some of whom are exited survivors – were assaulted by a group who chanted “anti-terf” slogans. One of the assailants can be seen slapping a woman before biting her on the face.

The protest was composed of members the radical feminist group L’Amazone, as well as Osez le Féminisme, and Résistance Lesbienne.

According to L’Amazone, they were subjected to 7 attacks in the span of twenty minutes by activists from three anti-capitalist and pro-sex trafficking organizations, including the STRASS syndicate, which lobbies for the legalization of sexual exploitation.

“When will it stop? How long will feminist organisations tolerate this violence ? What else should we endure to be believed when we say that the supporters of ‘sex work’ are pimps who hate women and beat up survivors?” said a representative of L’Amazone, while French women’s rights campaigner Marguerite Stern called Women’s Day “the most dangerous day of the year for feminists demonstrating against prostitution.”

In Brussels, trans activists distributed leaflets explaining how to recognize “TERFs.” According to a translation provided by a woman who attended a protest there, the flyer identifies “TERFs” as women who promote “abolitionist” and “whore-phobic rhetoric” and who oppose pornography. It advises readers to “avoid discussion” and states that “identities are not up for debate.”

A group of trans activists attempted to attack feminist protestors at the Brussels demonstration, but were ultimately outnumbered. Instead, they chanted insults and threats.

According to one anonymous woman who attended, “On March 8, the international women’s day, my radical feminist friends and I decided to go to the march despite what happened to us during our last action in Brussels on November 28 when we got attacked by trans activists during the protest against violence against women. Before the march started, my friends received a pamphlet on how to spot TERFS.”

“During the march, we felt safer than the last time because there were more of us and we were marching with other feminist groups but the atmosphere was heavy; we were holding abolitionist messages and stating biological facts on our signs.”

“They were holding hateful signs with the usual words ‘TERFS/SWERFS’ to describe us. There were also banners on the walls of buildings reading, ‘NO TERFS NO SWERFS’, ‘Transphobes, go fuck yourselves’ (in the feminine form), and ‘You’re all dirty b*tches.’ At the end of the protest, when everyone left, we tore them down.”

Trans activists also attacked women in Santiago, Chile. In addition to ripping their posters, they also set them on fire. Slogans among their banners included statements of lesbian pride, as well as anti-sex industry sentiments.

One of the women was struck on the head with a billy club, leaving her bleeding.

In Ankara, women’s rights demonstrators were surrounded and prevented from marching by trans activists, who grabbed their signs and ripped them. The assailants, waving the transgender flag, claimed that the women’s banners contained “transphobic rhetoric,” according to new outlet Dokuz 8 Haber.

A woman who attended the protest shared a photo of one of the banners, which roughly translated to “Women are women, not cis,”and said, “Since the march started, we saw aggression from men which we did not see from the police. Our banners were torn.” Speaking with Reduxx, she explained how two men in particular followed them while “aggressively chanting slogans” and called them “b*tches” and “wh*res.”

The women were participating in the 20th Feminist Night March, an event calling for an end to violence against women that has typically been disrupted by police using tear gas and force, as was the case again this year in Istanbul.

The Turkish protest was largely intended to draw attention to violence against women and so-called “honor” killings in the country. According to a 2009 study, 42% of Turkish women aged between 15–60 had suffered some physical or sexual violence by their husbands or partners.