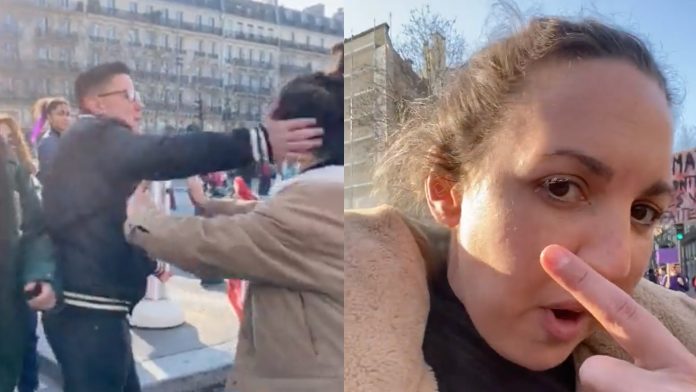 A feminist collective comprised of sex industry survivors were attacked by pro-sex trade activists on International Women’s Day while demonstrating against pornography and prostitution.

On March 8, Marguerite Stern, a feminist activist known for raising awareness of femicides in France, shared a video depicting a feminist demonstrator being slapped in the face by a pro-sex trade activist. After the attack, the women begin chanting “agresseur,” which roughly translates to “bully” or “aggressors.”

In her tweet, Stern highlighted that this has been an ongoing pattern in recent years, saying that International Women’s Day has become the most dangerous time of year for feminists who oppose sex trafficking.

“It’s becoming a tradition in France: March 8th is THE most dangerous day of the year for feminists demonstrating against prostitution. Are you going to hit us every year?” tweeted Stern, referencing an attack made last year against abolitionist activists on Women’s Day.

In another angle of the attack posted by Résistance Lesbienne, multiple women are seen being brutally attacked by an individual wearing black, with one woman’s hair appearing to be pulled at the scalp by him. One assailant also appears to bite a woman on the face.

One of the women at the shocking event was Pauline Makoveitchoux, a feminist activist and photographer. In a video posted to her Twitter, Makoveitchoux and another woman describe the violence that took place.

Speaking French, Makoveitchoux says they were being followed by pro-sex trade activists who attempted to steal and destroy their signs. She says she was struck in the face and eye, while her friend says she was hit in the hand.

This isn’t the first time French feminists have been assaulted during demonstrations against the sex trade. In 2021, at a demonstration organized by the Coalition Against Pornography and Prostitution (CAPP) in 2021, transactivists carried out a premeditated assault on the group of women who had congregated at the Place de la République in Paris.

The opposing activists, who referred to themselves as a pro-trans antifa collective, hurled eggs at the women while chanting, “One TERF, one bullet, social justice.” They attempted to physically assault the women and ripped their banners. At the base of the monument where the feminists has gathered, they spray painted the threat: “Save a trans, kill a TERF.”

An anonymous woman who was involved with the CAPP anti-sex industry demonstration described the assault at the time, saying, “We’re not a violent group at all. Some of us are immigrants and the most marginalized women in society. We do not even respond to hatred and violence with insults. What we shouted back was ‘male violence’. After that, they started yelling ‘transphobes’, and that’s when the most chilling chant I have ever heard in my life started. They were chanting, ‘One TERF, one bullet, social justice.’”

She continued, “I still can’t stomach the violence of what we went through. I still have a hard time sleeping at night. I have the images going through my head… They took eggs, and a lot of them were prostitution survivors. They started sobbing.”

You can donate to CAPP by visiting their Twitter.