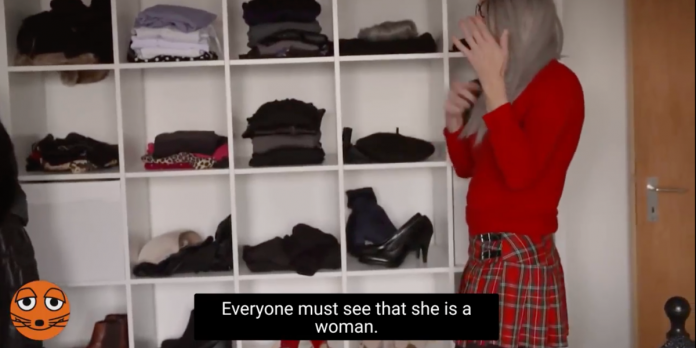 Feminists in Germany are calling out a popular children’s program after it featured an interview with a trans-identified male and taught the kids that being a woman meant wearing skirts and learning to walk in high heels.

Die Sendung mit der Maus [The Program with the Mouse] has been on the air since 1971 and has won over 75 awards. It is well-known throughout Germany as an educational program for young children, with its primary demographic being ages 4 to 9.

An episode which aired on March 27 to highlight the “Transgender Day of Visibility” featured the theme of transgenderism. The topic is explained briefly by two presenters, who state, “A transperson is someone who for example was born as a girl but is actually a boy, or the other way round, who was born as a boy but actually feels like a girl.”

The young audience is then introduced to the story of a previously homeless man named Erik who now calls himself Katja. Interviewed by the young host, Siham El-Maimouni, Katja explains that being transgender means that he was “born with a penis” but that as a child he was jealous of the girls in his class.

“I liked the way they dressed, their clothes, their hair, the way they acted. It was me,” he says. “Katja” takes Siham for a tour of his new apartment, which has been provided through social welfare programs.

He shows her his makeup collection and says that he must use a little every day, at which point Siham asks, “Are you vain?” and laughs. Katja then says, “Yes. I enjoy dressing up.”

Katja then shows Siham his extensive collection of high heels and reveals that he began stealing his mother’s attire as a teenager — a common pattern among men who dress in women’s clothing for sexual purposes.

Siham narrates: “Katja likes to wear skirts and dresses,” as he is shown wearing what resembles a schoolgirl-style skirt, continuing: “Everyone must see that she is a woman. Completely public, visible to all.”

Katja describes the difficulties he experienced when applying to change his sex marker on identification. The process is briefly detailed, and “Katja” shows Siham his court order.

“It is determined that the applicant is to be regarded as the female sex,” reads the document. His birth certificate has also been altered to declare that he was born a female.

As revealed on national media outlet West German Broadcasting (WDR), Katja had secretly been dressing in women’s clothing for years, even while homeless. As he lived on the streets for over two decades, he carried with him a plastic bag full of dresses and women’s underwear.

In one scene, the man’s bras are visibly displayed, and he boasts of buying silicone breasts to put inside them. Katja began dressing up full-time immediately after the government provided his housing, and tells his social worker that he wants to be a nurse — despite having no training in the field.

Recently, a trans-identified male who goes by Tessa Ganserer was elected to Parliament for Germany’s Green Party. Ganserer, whose real name is Markus, took a position that had been reserved for women’s political representation.

Similar to Katja, Ganserer began stealing his wife’s clothing to satisfy a sexual fetish before claiming a female identity. Ganserer is campaigning for a sex self-identification law and has the support of the Green Party and the Free Democratic Party (FDP).

According to women’s rights group Sex Counts, “The Greens’ strategy is to introduce a de facto sex self-ID ruling which is not based on law. Sex self-identification is the core element of a ‘Self-ID Act’ which was turned down by the German parliament in May 2021. The May 2021 draft law had been introduced to parliament by the Green Party and the Free Democratic Party (FDP).”

Prominent German feminist publication Emma criticized the episode of The Mouse, saying, “We learn, dear children: Women are only women when they wear skirts and dresses and shoes that are so high that they first have to learn to walk in them.”

Emma’s editor Chantal Louis went on to condemn the program for “advertising uncritically for the sex self-identification law”, saying that it “promotes the government’s so-called ‘Self-Determination Act’ completely uncritically and ignores all the dangers of the draft law, which invites 14-year-olds to ‘change gender’.”

Feminist organization Women’s Declaration International (WDI) has staged protests against the proposed self-identification legislation. A petition written by members of WDI Germany asserts that the “Self-Determination Act” interferes with the rights of parents and endangers the wellbeing of children.

“Children from the age of 14 may therefore be exposed to unnecessary and irreversible genital-altering surgical interventions, which include the amputation of breasts, uteri, ovaries, and penises,” the petition reads. “Amputating healthy parts of the body or taking puberty blockers and hormones that damage the body cannot change a person’s sex. The law should not suggest that this is possible.”