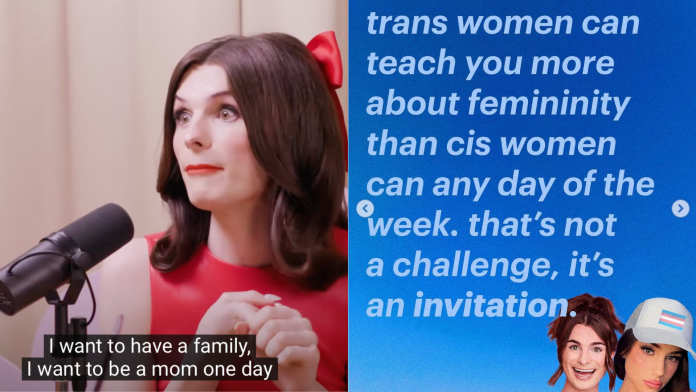 Ulta Beauty, one of the largest cosmetics retailers in the United States, is facing backlash from women on social media after featuring an interview with a controversial trans-identified male who rose to fame after documenting his “days of girlhood.”

The interview, hosted by “gender fluid” hairstylist David Lopez, was clipped and shared on the outlet’s official Twitter on October 13 to promote the full-length video posted to their YouTube. Titled “The Beauty of Girlhood,” the interview focused on Mulvaney’s transgender identity and rise to stardom through TikTok.

While the clip uploaded to Twitter was only 15 seconds long, it has generated hundreds of furious replies and mockery as Mulvaney — a biological male — was heard outlining his desire to be a “mother.”

“I know I can find love, I know I can still be a performer, I know I can have a family. I want to be a mom one day — and I absolutely can! The narrative still has a long way to go.”

In the full-length interview on YouTube, Mulvaney also lashed out at women who took issue with his stereotypical representation of femininity.

“I think in womanhood I get shamed a lot for liking pink and liking glitter, and I’m like — Why does that bother you so much? They think I’m lowering their standard of being a woman.” Mulvaney said, to which David Lopez replied, “Misogyny. Patriarchy.”

While the clip has only been up for two days, it has gathered over 200 primarily furious replies and another 200 quote-retweets, most of which were wracked up over the course of the day. Ulta has since scrambled to ‘hide’ many of the negative responses from women who pointed out that Mulvaney’s comments were offensive to mothers and “insulting” to females.

Prior to locking the comment section, Ulta attempted to reply to some outraged comments and placate users, writing: “We want our channel to be welcoming to people from all walks of life — even people you may not agree with.”

“It’s not welcoming to girls who would like some RESPECT. You are MOCKING us!” @babybeginner said in response to Ulta’s comment.

To another user stating that it was “creepy” to have two adults discussing “girlhood,” Ulta wrote: “We believe that beauty has no boundaries, and we want to create an environment where all expressions of beauty are welcome.”

Beneath the podcast clip, some women posted screenshots of them unsubscribing from Ulta’s promotional newsletters, with many saying they were even going to boycott the store entirely or close down their rewards accounts.

Mulvaney rapidly rose to fame for his short videos documenting his “days of girlhood,” the total of which have accumulated millions of views in the past few months alone.

In the TikToks, Mulvaney is often seen acting in excessively “feminine” ways which have often been perceived as representing harmful, sexist stereotypes. While “being a girl,” Mulvaney often attributes his womanhood to what he is wearing, his makeup, eating habits, and dramatic emotions which lead to crying and binge shopping.

Many have noted Mulvaney has been afforded multiple privileges as a result of his transgender status, including having been offered a Tampax feminine hygiene partnership after approximately two weeks of beginning to identify as a “girl.” He also recently represented women at the Forbes Power Women’s Summit in September on his 188th day of “girlhood.”

Mulvaney has drawn ire from feminists on Twitter for multiple targeted incidents including a young female comedian, whom Mulvaney recently put on blast for TikToks she made satirizing his “girlhood.”

The comedian, known on social media as Jess, has faced massive backlash as a result of Mulvaney’s call-out video, and has reported being abused on social media from fans eager to defend him. Her family’s personal information was also allegedly leaked by Mulvaney’s supporters.

During his “day 74 of girlhood” video, Mulvaney advocated for the normalization of his scrotal “bulge” after complaining that people at a supermarket were disturbed by the outfit he had been wearing. The leather shorts he was donning clearly showed the outline of his genitals.

On Instagram, Mulvaney participated in an informational slideshow claiming that trans-identified males could “teach” biological women about “femininity.”

Mulvaney recently stated that he felt it should be “illegal” for people to refer to him using masculine pronouns or call him a “man.”