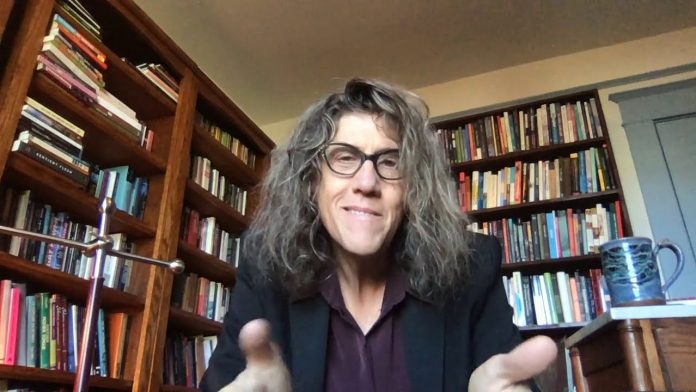 The University of Cork is hosting the 25th “Lesbian Lives” conference, but one of its main keynote speakers is a biological male who identifies as a lesbian.

Susan Stryker, a transgender Professor of gender studies at the University of Arizona, is the first of three keynote presenters at the 25th Lesbian Lives conference, which is being held March 4th and 5th at the University of Cork in Ireland. Its 2022 theme is “solidarity.”

Stryker was one of the first academics who sought to apply critical race theorist Kimberlé Crenshaw’s concept of “intersectionality” to males who insisted they could become women. In 2020, Stryker wrote an article for Time Magazine drawing and relying on the history of racial segregation to claim that women were merely a social construct. Such comparisons have been extensively decried by Black feminists.

But Stryker’s most infamous work is a 1993 essay subtitled Preforming Transgender Rage, in which he describes himself as a “Harley-straddling, dildo-packing leatherdyke from hell.” One part of the essay is an extended journal entry from Stryker gratuitously detailing the graphic nature of his wife’s childbirth, which devolves into a parable from Stryker complaining about his emotional state once he arrived home.

“For days, as I had accompanied my partner on her journey, I had been progressively opening myself and preparing to let go of whatever was deepest within. Now everything in me flowed out, moving up from inside and out through my throat, my mouth because these things could never pass between the lips of my cunt.”

In 2008, Stryker lashed out against Vancouver Rape Relief — Canada’s oldest rape crisis shelter — denouncing the concept of “segregated spaces” for women. Stryker’s comments came following the conclusion of a lengthy human rights case brought against the shelter by Kimberly Nixon, a trans-identified male who demanded the right to work with the vulnerable women and was denied on the basis of his biological sex. Vancouver Rape Relief was ultimately affirmed by higher-level courts to have no obligation to accommodate him, and Nixon lost all subsequent appeals. In 2007, he was ordered by the Supreme Court of Canada to pay the shelter’s legal fees, which he refused to do.

Canadian feminist and lesbian activist Eva Kurilova of Gender Dissent says she was “disappointed” to learn Stryker had been invited to represent lesbianism. Speaking to Reduxx, she says that “by making this choice, the conference is pushing the idea that lesbianism is nothing more than an ‘identity’ rather than a material reality, and contributing to the erasure of lesbians.”

Kurilova says that by platforming Stryker, the University of Cork is pushing regressive ideas about lesbianism, noting that attempts to define the sexuality as exclusively referring to female homosexuals are often met with “toxic derision” due to ideas about inclusivity.

“In queer and woke spaces, lesbians are no longer allowed to describe ourselves as same-sex attracted, as this is not seen as inclusive,” she says, continuing: “Instead, we have to be open to biological males in our spaces, on our dating apps, and in our sex lives.”

Kurilova took particular issue with a reading from Stryker’s Performing Transgender Rage essay, singling out a passage where he defines his sexuality as wanting “intimacy with women more than intimacy with men” while calling it a queer attraction.

“What he is describing is heterosexuality. He is not and can never be a woman who wants and seeks intimacy with other women.”

But Kurilova ends with hoping that Stryker’s attendance will contribute to the recent surge in backlash against trans-identified males seeking acceptance and accommodation within lesbian spaces.

“Many lesbians are, unfortunately, used to taking a backseat to men who think they can speak on our behalf. I can only hope the conference sheds some light on what is going on and inspires more pushback.”