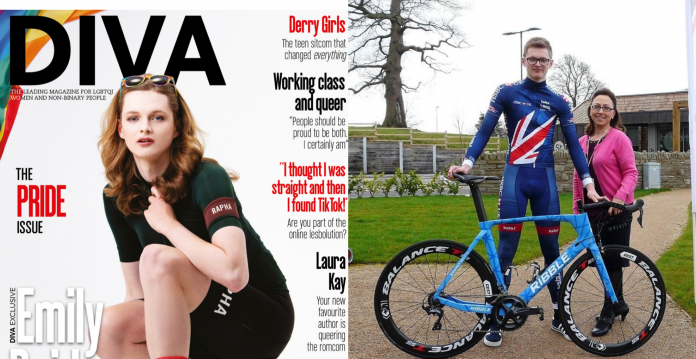 A lesbian magazine is under fire after announcing a trans-identified male would be their cover star for the June 2022 “Pride” Edition of their monthly circulation.

On May 20, DIVA magazine announced on Twitter that transgender cyclist Emily Bridges would be featured on the cover of its next issue, interviewed by the publication’s head Linda Riley.

Bridges made headlines earlier this year after being barred from competing in women’s cycling races in the UK as he did not meet qualifying standards. After a review of his credentials, it was found that Bridges was still registered with the UCI – the sports international governing body – as a male.

Bridges had previously won multiple national-level championships in the men’s division, and had placed highly in the male category as recently as February of 2022, just weeks before attempting to enter the female competition.

After the announcement that Bridges was making a push into women’s sport, female cyclists threatened to boycott the British Omnium Championship if he was allowed to compete. Bridges drew widespread public outcry for having what many saw as an unfair biological advantage.

The backlash took place during ongoing controversy over British Cycling’s newly updated transgender and non-binary policy, which was exposed as threatening members with fines or expulsion for being critical of the inclusion of males into women’s sports, or questioning members’ “gender identities.” After Bridges was disallowed from competing, British Cycling expressed “disappointment” on behalf of trans-identified male athletes.

DIVA’s announcement of their June cover star was not well received by women on social media, who promptly piled beneath the post to make their thoughts known.

Genuine question, who is Emily Bridges an inspiration for?

In what way is the Emily Bridges story inspiring?

While many users voiced confusion as to why a biological male who identifies as a lesbian was the featured choice, others took direct aim the magazine itself.

“Let’s not forget, this is a publication owned by Linda Riley who claimed to have invented #LesbianVisibilityMonth when she actually stole it from somebody else,” user @UKHomosexual wrote, noting lesbian activist Jeanne R. Córdova should be credited with having created the idea, “Linda [is] a white women colonizing a latino women’s idea and claiming ownership.”

“To chronicle the ‘coming out journey’ of a heterosexual male as a lesbian in a lesbian publication is absurd,” Kurilova said, noting that DIVA was just one of many lesbian outlets participating in attempts to force lesbians to include men in their sexuality.

Kurilova also took aim at Emily Bridges, stating that he “follows in the footsteps of men like Susan Stryker who have been erasing and redefining what it means to be a lesbian,” continuing: “The idea of a ‘male lesbian’ used to be rightly ridiculed for the joke that it is. Yet not accepting such a man as a lesbian today is considered transphobic.”

In April, a man in Germany caused widespread backlash after announcing that he identified as a “male lesbian.” Francois Etscheid, 50, was born male and identifies as a man, yet was profiled in General-Anzeiger as belonging to a disregarded minority of ‘male lesbians’ whose sexualities were equally as valid as any other.

On DIVA, Kurilova says it’s “sold out to gender ideology,” and that the only hope for female homosexual-exclusive spaces is to push back.

“Lesbian magazines that happily put a man on the cover and consider any lesbians who object to be bigots deserve none of our attention and support.”

DIVA was first launched in 1994 under the guidance of editor Frances Williams, but “LGBTI+ activist” Linda Riley became the magazine’s publisher in 2016. Riley describes herself on Twitter as the creator of hashtag campaign #LesbianVisibility and the founder of Bank of London Rainbow Honors Day.

The outlet was formerly marketed as a “mainstream lesbian magazine” for and about lesbian and bisexual women, but under Riley’s leadership has changed its target demographic to “Queer” women and “non-binary people.”