Lesbians Assaulted By Trans Activists at Dyke March in Cologne 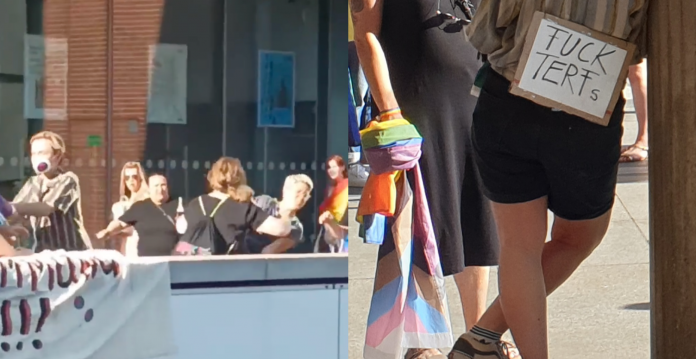 Women stating their opposition to males self-identifying as lesbian were attacked at a ‘lesbian’ pride march in Cologne, Germany, with one of the demonstrators being brutally choked by a male trans activist.

On July 2, a group of women gathered outside of Museum Ludwig and unfurled banners which defined lesbians as “female homosexual persons” and declared opposition to the ‘queer’ trend.

The women, comprised of members from Women’s Declaration International (WDI) Germany and LGB Alliance, also held up a flag bearing the Labrys symbol, a double-sided axe adopted as a pride symbol by the lesbian community in the 1970s.

The women were located on a balcony which was just above where the rest of the Dyke March participants were walking the street, and quickly caught the attention of the activists amongst the crowd.

According to a representative of WDI Germany who spoke with Reduxx on the condition of anonymity, trans activists within the march started playing a song which repeated the words “F*ck you,” and began hurling insults at the women as they stood with their signs.

Dyke March event organizer Annette Rösener can be seen in video footage shared on Twitter attacking a young woman holding the lesbian pride flag. During the struggle, the Labrys flag, along with several other banners and signs, were stolen by trans activists.

Rösener then assisted others in replacing the pro-lesbian flag with a banner which read ‘Dykes Against Transphobia.’

One of the organizers also lashed out against lesbians who who “exclude” males from their sexuality, grabbing a sign which read “lesbians don’t have penises” from a woman and attempting to destroy it.

But Rösener wasn’t the only one lashing out against the women peacefully demonstrating. A masked man rushed the young woman who had been holding the lesbian pride flag and put her in a headlock, wrapping his arms tightly around her neck.

Susanne, a member of the LGB Alliance, struggled against the assault, and was eventually released.

Speaking to Reduxx, Susanne said she wasn’t surprised about the attack on her group, but was taken aback by the violence from the trans activist towards her.

“I guess I was anticipating it, but not how sudden and violently it happened,” she explained, “I was scared I could die when the guy put me in a headlock.”

Susanne pointed out that when the organizers of the Dyke March tried to intervene, it was only to defend the man choking her as she struggled to free herself.

A police report has been filed, but no arrests have yet been made. Charges listed in the report include robbery, theft, intentional simple bodily injury, insult and damage to property on streets, roads or squares.

But Susanne is not optimistic that action will be taken by the authorities.

“I’m not sure the police will be effective,” she said. “They seemed very confused as to why we were attacked at all. One of them suggested we were victims of a homophobic hate crime. Another one asked us if we were protesting against people changing ‘Geschlechtsidentität’ or ‘sex identity,’ the German word for gender identity.”

Violence against lesbian and women’s rights activists have been on the rise in recent years. Trans activists have assaulted women in various countries for protesting sex trafficking and resisting male colonization of lesbian identity and spaces.

In July 2021, Get The L Out UK posted video recordings showing lesbian demonstrators being physically assaulted by trans activists during Paris Pride. The women were voicing their opposition to males identifying into lesbianism.

In Paris a few months prior, a group of women with the Collective Against Pornography and Prostitution (CAPP) were attacked by transactivists while protesting against sex trafficking and male violence. The counter protesters pelted the women with eggs while spraying red paint in their eyes. Many of the women assaulted were survivors of the sex industry.

In March of this year, sex industry abolitionist feminists in Barcelona were confronted and threatened by “people in favor of prostitution.” The women had gathered for a protest planned by Catalunya Abolicionista Plataforma Feminista (CATAB) in Plaza St. Jaume, where they were surrounded by counter-protestors who attempted to assault them, but were prevented by police.

Politicians from both Germany’s Green Party and the Socialist Democrats are lobbying for a sex self-identification bill which previously would have allowed children as young as 14 years old to legally transition, regardless of parental consent.

Women’s Declaration International (WDI) staged protests against the proposed legislation. A petition written by members of WDI Germany asserted that the “Self-Determination Act” interferes with the rights of parents and endangers the well-being of children.

“Children from the age of 14 may therefore be exposed to unnecessary and irreversible genital-altering surgical interventions, which include the amputation of breasts, uteri, ovaries, and penises,” the petition reads. “Amputating healthy parts of the body or taking puberty blockers and hormones that damage the body cannot change a person’s sex. The law should not suggest that this is possible.”

Following the backlash, the legislation was amended to allow for parental consent for childhood medical transition; however, should parents express opposition, children can then file a petition with the court system and receive approval from judicial authorities.