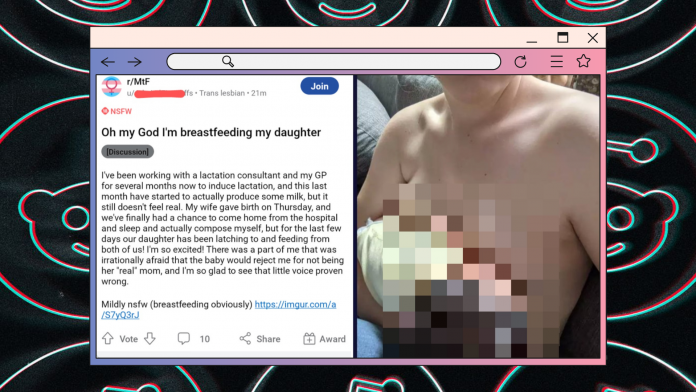 On May 16, 2022, Reddit user u/AdmiralFisticuffs published a post on the r/MtF subreddit, a community of over 150,000 users for males who identify as women.

The post, titled “Oh my God I’m breastfeeding my daughter,” details how the user worked with a lactation consultant and his gender physician for several months prior to his female partner giving birth. The baby was born last week, and the user states the child has been alternating feedings between his wife, formula, and himself. The user also included a link to a photo gallery showing snapshots of himself “breast feeding” the baby. Since published just hours ago, the post has garnered over 1,000 ‘upvotes,’ bringing it to the top of the r/MtF page.

On Reddit, users offered congratulations and asked him for advice on how to replicate his results with lactation. In the comment section, u/AdmiralFisticuffs provided a step by step guide, detailing when to use an electric breast pump, and which cocktail of hormones he had to take to be able to lactate. He also notes he had to illicitly import domperidone from Canada, as it is not approved for use in the USA.

While the response within the transgender subreddit was largely positive, the user’s post was received drastically differently elsewhere on the web after the post was screen captured and began to circulate on Twitter.

“This poor child. This is an experiment on an infant who can’t consent. This is abuse for validation and it’s disgusting” one user said.

In the replies, many expressed concerns that the child was being used as a tool to ‘affirm’ the man’s gender identity. Another user questioned whether the hormone-induced discharge from a man’s nipples would be healthy or safe for babies.

Speaking to Reduxx, retired physician Dr. Maja Bowen said she had “several concerns” about the practice.

“What comes out of a man’s nipple is not mother’s milk, but a watery substance devoid of antibodies and nutrients that are found in mother’s milk, the composition of which changes as the baby grows up.”

Dr. Bowen says that the few previous studies done on trans-identified males who have induced lactation show a paucity of evidence the discharge is nutritious or in equivalent of a mother’s breast milk.

“Men are not women or mothers. They are not designed to breast feed. So the question is why is this man doing this, when the baby has a mother and access to both actual breast milk and formula?” Dr. Bowen also notes that there are questions about the man’s intentions.

“For all we know, the mother is breast feeding and he is using the baby as a prop. What is the benefit to the baby here? It seems to be all about him and his needs.”

Peer-reviewed research into the nutritional value of male breast fluid is hard to come by, and some researchers report even having been discouraged from inquiring out of fear of medically justified “transphobia.”

In 2018, an endocrinologist from Boston Medical Center claimed that breast feeding was an important method of validating a trans-identified male’s gender identity.

In an interview with The New Scientist, Dr. Joshua Safer said: “Many transgender women are looking to have as many of the experiences of non-transgender women as they can, so I can see this will be extremely popular.”