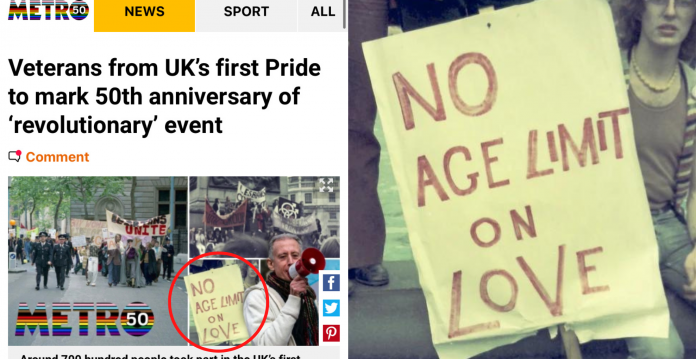 A major UK news outlet is prompting concern on social media after featuring a profile of a popular gay rights figure who contributed to a “pro-pedophile” anthology, wrote an obituary for a pedophile activist, and once claimed “children have sexual desires at an early age.”

On June 7, Metro published an article titled “Veterans from UK’s first Pride to mark 50th anniversary of ‘revolutionary’ event.” Both in the article’s graphic and the body of the piece, a photograph of a man holding a sign declaring “No Age Limit on Love” at the 1972 Pride march is prominently displayed.

While some commenters attempted to dismiss the sign as being a harmless reference to when the age of consent was higher for relationships between two males than between a male and a female, others are interpreting the sign along with the subject of the article and finding it far more nefarious.

The article is largely centered around profiling gay rights activist Peter Tatchell, a controversial figure with a long history of disturbing remarks about pedophilia and child sexual abuse.

As recently as 2018, Tatchell was forced to clarify his position on pedophilia after a letter to the Guardian he wrote in 1997 emerged. In the letter, Tatchell stated the “positive nature of some child-adult sexual relationships is not confined to non-Western cultures,” and that he had friends who had engaged in “sex with adults from the ages of 9 to 13” who had enjoyed it.

Tatchell’s letter had been written in support of a book titled Dares to Speak: Historical and Contemporary Perspectives on Boy-love, published by the Gay Men’s Press in 1997. The book is said to have analyzed pedophilia in a favorable light, and utilized essays from Paidika, a European pro-pedophile journal.

At the time of its publication, the book had been slammed by journalist Ros Coward, who wrote that it “refuses to take seriously sexual abuse and its consequences.” Tatchell’s letter was in defense of the work, apparently displeased with Coward’s negative review.

Tatchell argued that while he was unable to condone pedophilia, not all sex involving children was “unwanted, abusive or harmful.”

After the letter emerged in 2018, Tatchell insisted his defense was misunderstood and stated he opposed child sexual abuse, and also claimed there were parts of his letter which condemned child sexual abuse that had been cut out by editors. But this was not the first instance of his comments prompting concern.

In 2009, Tatchell penned an op-ed for the Guardian advocating for the age of consent to be lowered, claiming children were being criminalized for having sex with their peers. Tatchell had previously conducted an interview with a 14-year-old prostituted child pseudonymously known as “Lee” which he claimed was for the same purpose — advocating for youth rights to be sexually active with those of similar ages. But the interview, headlined “I’m 14, I’m gay, and I want a boyfriend,” focused on Lee claiming children could consent to sex with adults, and stating he enjoying having sex with adult men.

For the interview, Tatchell would ask Lee a number of questions, some of which were sexually charged, as Lee repeatedly insisted there was no danger to his physical or mental health from having sex with adult men, and that he enjoyed being a prostitute.

“The law is stupid,” says Lee in the interview, “If I know what I’m doing and I’m not harming anyone else, I should be allowed to have sex with who I want.” Lee goes on to claim that laws deeming adult-child sex ‘indecent assault’ are “ridiculous,” stating: “I’m only 14 but I know what I’m doing. I understand what consent involves. So does the person I’m having sex with. No one is indecently assaulting me. That’s a stupid suggestion.”

At the time, Tatchell wrote that Lee was in a relationship with a man in his mid-20s, and Tatchell presented their relationship as harmless.

In a 2018 review of Tatchell’s disturbing history, feminist journalist Julie Bindel stated that in the interview “Tatchell appears only to be interested in pursuing the line about how much Lee says he likes sex with adult men.”

In 2021, Bindel, along with Melanie Newman and Hayley Dixon, revealed in the Telegraph that Tatchell had penned a book review in which he claimed that “children have sexual desires at an early age,” and praised the “courage” of those selling what he later admitted was a “pro-pedophilia” work.

The book was a collection of essays compiled by Warren Middleton, former vice-chairman of the Paedophile Information Exchange (PIE). Tatchell contributed a chapter for the 1986 anthology titled “Radical perspectives on “Childhood Sexuality, Intergenerational Sex, and the Social Oppression of Children and Young People.” Other chapters in the anthology covered child sexual abuse material and the normalization of pedophilia.

While he would initially claim he was bamboozled into contributing to the text, denying knowledge of what the overall work was about, Bindel, Newman, and Dixon found that he had written a favorable review of the book at a later date.

The review, titled “Radical thoughts on consent,” lamented that Middleton was unable to find a publisher, and praised the book as speaking “coolly, clearly and radically about a subject which has far too long been shrouded in emotional hysteria and adult chauvinism.”

Tatchell would go on to apologize for the review, and continue to deny any instances of knowingly associating with members of PIE.

But this was not Tatchell’s first intersection with the notorious group. In 1998, he wrote a doting obituary for Ian Dunn, the co-founder of PIE. In the obituary Tatchell calls Dunn a “pioneer for lesbian and gay human rights, remaining a central figure in the battle for homosexual equality,” but does not mention his pro-pedophilia views, which was a focal point of his activism.

Dunn had organized pedophile meetups in Glasgow throughout the 70s and 80s, proudly stating: “I am not one of those homosexuals who get cross or nervous when the subject of love between men and boys is raised.” According to journalist Julie Bindel, Dunn allegedly raped a young boy who turned up at his funeral just to “make sure he was dead.”

As with the anthology contribution, review, and Guardian letter — Tatchell would claim ignorance, and state he was unaware of any pro-pedophilia advocacy conducted by Dunn.