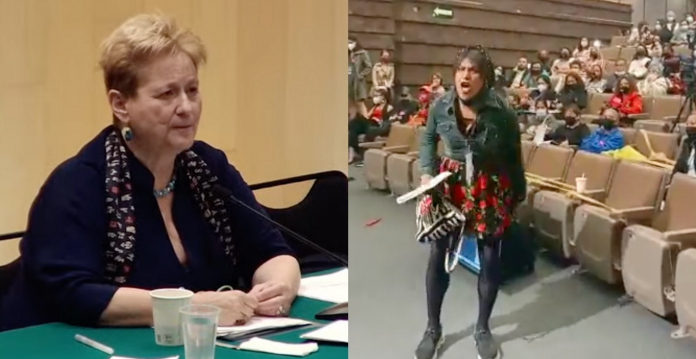 A conference on tackling human trafficking and migrant smuggling was interrupted when a transgender politician became enraged at a speaker suggesting that the sex trade should be abolished, calling it “hate speech.”

Dr. Cobo gave a radical feminist perspective on human trafficking, and called for the abolition of the sex trade which she noted relied upon the exploitation of women and girls with few economic and social resources.

At the end of her talk, Dr. Cobo was presented with a gift from Cecilia Márquez Alkadef, a member of Mexcio’s Chamber of Deputies, which is one of the key organizers of the annual Congress.

Just as Dr. Cobo was posing for photographs, a male voice could be heard furiously screaming through the auditorium.

On the event’s official livestream, the camera panned out to show an individual getting increasingly aggressive, yelling towards the stage before standing to yell out into the audience. The event’s host attempts to calm the individual down and request they respect the perspective that was presented by Dr. Cobo, but the man only became more enraged.

The man was quickly identified as Maria Clemente, a trans-identified politician who was elected last year and became the first transgender person to enter Mexico’s Chamber of Deputies.

A member of the audience began to speak out against Clemente, yelling back in a sarcastic fashion, “Women were born to be whores?” To which Clemente responds, “Well I am a woman, and I am a whore!  It’s my job and and how my family eats! I love it!”

In another angle of the same altercation, Clemente can be heard chanting: “Sex work is work! Sex work is work!” Clemente also lashes out against one of the Congress officials attempting to calm him down when he is called ‘Sir,’ and begins to aggressively approach the podium yelling: “Maria! Maria! My name is Maria!”

Following Clemente’s outbursts, the Congress went to a recess. According to La Razon de Mexico, Clemente left and several other attendees withdrew. The Congress is holding its final meeting today.

A few clips of Clemente’s outburst taken by an audience member began circulating on social media on Thursday, with many Mexican feminists expressing outrage at his furious defense of prostitution, and derailing of a conference on human trafficking.

“I am not a psychologist but these people urgently need mental help. They’re not [okay], really. We see the same scenes. Hate, rage, violence, aggressiveness and a huge pathological ego. They kick like small children in adult bodies. It is not normal.” One commenter wrote in Spanish beneath one of the videos of the incident posted by Women’s Declaration International’s Mexico branch.

“How strange that [a trans-identified male] always has to be the center of attention in feminist spaces and even more so in a room full of female victims. And they have the nerve to say that they are disrespecting him, what was he doing in a congress on trafficking in the first place?” Another asked.

Many offered praise for Sonia Sanchez, the abolitionist who had engaged Clemente from the audience and defended women’s right to be free from sexual exploitation.

Sex-based violence against women in Mexico is considered to be among the highest in the world, with the country’s femicide rate continuing to rise even as the general homicide rate falls. 85% of human trafficking victims in the country are female, with women and girls overrepresented in every form of the crime, including organ trafficking, forced prostitution, and labor exploitation.

The lack of justice for female victims of sex-based violence have led to widespread unrest in Mexico, especially amongst the organized feminist activist community who have staged regular protests this year. In March, thousands of women marched the streets of Mexico City demanding greater protection from law enforcement and the Government.

UPDATE July 8/22: A spokeswoman associated with WDI Mexico responded to Reduxx‘s request for comment, and, in a Spanish-language statement, called Clemente’s behavior “an embarrassment.”

“Although this behavior leaves much to be desired, for [feminists] it is an opportunity to show the world the truth about transgenderism,” representative Laura Lecuona says, “These are not simply a few men on the margins of society fighting for their right to housing and work.”

Lecuona says this is not the first time Clemente has been recorded as having an explosive emotional outburst. In December of 2021, Clemente allegedly attacked Congressional cafeteria staff after they used the wrong pronouns for him.

“[Clemente] was the reason Deputy Gabriel Quadri was reprimanded by the National Electoral Institute for alleged expressions of ‘discrimination and transphobia,'” Lecuona explained, noting that the precedent of Quadri’s penalization had feminists worried as it acted as a warning against expressing any critical sentiment.

“Not all gender identity activists make such a fuss. Others are more subtle in their ways, but most of those who are influencers and have a certain platform, whether in traditional media or on social networks, are hostile to radical feminists and to anyone who does not agree with them.”

Women’s Declaration International is a statement which affirms the rights of women and girls based on sex, and denounces the impact gender ideology has had on women’s rights. It currently has over 32,000 signatories from 159 countries.