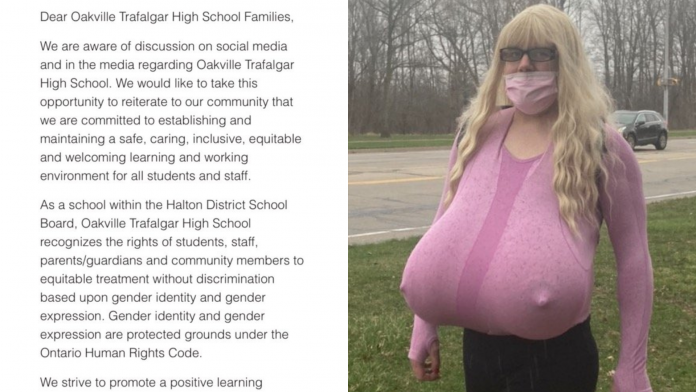 The Ontario High School at the center of controversy for having a male teaching young students while donning a large prosthetic bust has issued a full defense of the teacher in a newly-leaked email sent to parents.

On September 16, Reduxx confirmed the identity and employment status of the subject of viral images and videos which depicted a male instructor teaching students while wearing an unnaturally large prosthetic bust, complete with prominently protruding nipples.

While the images and videos had circulated for a few days prior, there was widespread confusion and disbelief as to whether or not the images were real, or, as some speculated, part of an elaborate hoax or comedy sketch.

But Reduxx managed to confirm that the shocking media could be traced back to Oakville Trafalgar High School (OTHS) in Ontario, Canada. The subject of the photos is Kayla Lemieux, a Manufacturing Technology instructor who allegedly began identifying as a woman last year. Some social media users claimed Lemieux’s birth name was “Stephen Hanna” after Twitter posts were circulated from users purporting to be students. While Hanna is also an instructor at OTHS, he is not the individual in the viral images.

Reduxx had contacted OTHS for comment, but was declined any answers. The administrator did, however, confirm that Lemieux was an active employee at the school.

Following the viral news, OTHS has now issued an email statement to parents in which they defend Lemieux’s employment status in the name of inclusivity.

“We are aware of discussion on social media and in the media regarding Oakville Trafalgar High School. We would like to take this opportunity to reiterate to our community that we are committed to establishing and maintaining a safe, caring, inclusive, equitable and welcoming learning and working environment for all students and staff,” the email reads.

The school defers to the Ontario Human Rights Code, suggesting that any concerns about Lemieux would be akin to discrimination.

“We strive to promote a positive learning environment in schools consistent with the values of the HDSB and to ensure a safe and inclusive environment for all students, staff and the community, regardless of race, age, ability, sex, gender identity, gender expression, sexual orientation, ethnicity, religion, cultural observance, socioeconomic circumstances or body type/size.”

The school’s defense of Lemieux comes after international outcry following widely circulated photos and videos of the teacher posted to social media. In all of the photos, Lemieux pairs his prosthetic bust with a very tight shirt, and short-shorts or skirts.

The response to the news that the Lemieux was an active teacher of young students was met with overwhelming backlash, with people noting that his appearance was not appropriate in a school environment where children were present.

Many took to trying to get the attention of the Ontario Minister of Education, and the Premier of the province, Doug Ford.

As the Ontario Minister of Education @Sflecce it is your duty to protect Ontario students from being exposed to this teacher’s vulgar sexual fetish. This man must be removed from the classroom and steps must be taken to prevent this from ever happening again @fordnation

Others also expressed offense at that Lemieux appeared to be mimicking a highly pornographic representation of a woman.

“This is so insulting it just makes me lose all faith in people. How can one single woman look at this and see it as anything but the gross dehumanization of our entire sex class?” Twitter user @alohabetty wrote.

Oakville Trafalgar High School is overseen by the Halton District School Board (HDSB), which has begun promoting gender identity ideology in schools in recent years.

In October 2021, HDSB released guidelines regarding Gender Identity and Gender Expression in Schools.

UPDATE 9/19/22: This article has been edited to provide clearer wording surrounding the widespread use of the name “Stephen Hanna.” Some individuals identifying themselves as students have claimed on social media that Kayla Lemieux was previously known to OTHS as “Stephen Hanna,” but that has not been verified independently by Reduxx. The name Kayla Lemieux has been confirmed as being associated with the individual in the photos and videos.

UPDATE 9/20/22: The Halton District School Board has now stated that Kayla Lemieux, confirmed to be the individual in the viral images, was not previously known as Stephen Hanna.

While the HDSB is now attempting to claim they do not know the identity of the individual in the viral media, their own staff directory had been used by Reduxx as a reference when determining the teacher’s identity and employment status.

As of this update’s writing, HDSB has ended public access to the staff directory for OTHS faculty.