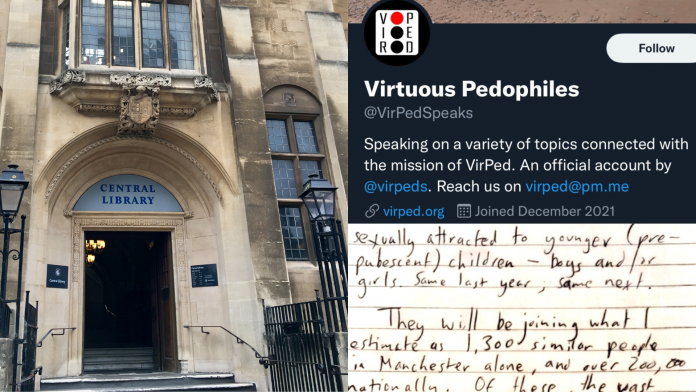 An organization that campaigns to destigmatize pedophilia has been slipping propaganda into books at libraries in major UK cities. A representative for the internet-based group Virtuous Pedophiles, Bly Rede, claims to have stuffed books with the handwritten letters in Bristol, Northampton, and Manchester.

Rede has been documenting his actions using the official Virtuous Pedophiles Twitter account. On July 21, Rede wrote that he was living in Bristol as a person with “an attraction to pre-pubescent children,” and estimated there were over 3,500 people in the community who were like him.

Virtuous Pedophiles is a group which states its goal is to “reduce the stigma attached to pedophilia.” On its online support group, it claims to have 6,000 members.

Rede launched a project to leave hand-written letters in major UK libraries by stuffing them in books. The letters plead for more tolerance towards “non-offending pedophiles.”

“For all of my adult life – and some time before – I have been aware I have an attraction to children. I realized this when I was fifteen. I have never acted on this sexual attraction, never sexually abused a child, nor used illegal material online. I never will,” reads the letter Rede left at a library in Bristol.

“We stay silent not out of shame (since we have done nothing harmful), but out of fear of what others like you will think of us. One by one, we are beginning to speak out, despite the risks,” Rede added.

The letter-writing campaign was seemingly inspired by a Twitter poll Virtuous Pedophiles held on its official account, asking respondents what they might do if they discovered a letter from a pedophile. The majority, 68%, responded that they would “read it.” The official Twitter account for the group is primarily followed by trans activists, self-declared “minor attracted people,” furries, academics, and journalists.

Seemingly encouraged by the positive response, Virtuous Pedophiles posted an update on July 21, informing their followers that the organization’s director, Rede, would begin inserting into books letters stating that most pedophiles do not sexually abuse children.

Initially, Rede gave a specific location for the first letter, left at a library in Bristol on July 21. He said he had tucked it between pages 222 – 223 of Letters From a Life: The Selected Letters of Benjamin Britten. Britten was a prominent English composer and pianist, who was known to have a questionable affinity for adolescent boys. A 2006 book by John Bridcut, Britten’s Children, described his relationship with young boys, and asserted that he had an “age of attraction” of 13. Britten once explained his ability to write so well for children by stating that he saw himself as a 13 year-old.

One of Britten’s most well-known works, the opera The Turn of the Screw, based on the novella by Henry James, is set at an English country residence called Bly House – from which Bly Rede appears to have derived his alias.

An update posted later the same day revealed that the letter had been removed, though no further explanation was given. Following this, fewer details regarding the exact location of the letters were revealed.

His third letter, according to an August 13 tweet, was “tucked into a book for professionals on helping adolescents with problems” at Manchester Central Library.

Rede has contributed to California-based organization the Prostasia Foundation, registered charity many have described as “pro-pedophile” due to its advocacy for the decriminalization of child sexual abuse materials and the legalization of sex dolls designed to resemble children.

In September 2021, Rede spoke with Candice Christiansen, a sex-addiction therapist who serves on the United Nations Human Trafficking Task Force, on her show titled “The Prevention Podcast.” Christiansen is the creator of the website The Global Prevention Project, where she has published submissions from self-professed pedophiles.

“In 2019, MAPs began reaching out asking us to share their stories. Our clinical team decided that having a MAP Blog was a good alternative to those who had contacted us wanting to have a voice but not being able to come on our podcast,” the site states.

One submission published to the ‘MAP blog’ is by Rede. In March 2020, Rede wrote a blog post titled “We Have to Protect Children – Including the Ones Who Are Pedophiles.” Disturbingly, Rede refers to “child pedophiles” and “minor pedophiles,” and asks, “In our eagerness to prevent the abuse of children, what if there is one group of children we are overlooking?”

Rede claims that research supports his belief that “most child sexual abuse is not carried out by pedophiles at all,” yet links to an academic publication which instead asserts that “child pornography offending is a valid diagnostic indicator of pedophilia.”

The term “minor attracted person” was first coined by another pro-pedophilia lobbying group called B4U-ACT, which was founded in 2003 by convicted child rapist Michael Melsheimer. Melsheimer explicitly stated that the purpose of the organization was to normalize pedophilia where the National Association of Man-Boy Love had failed to do so.

On pederast forum BoyChat, Melsheimer advised his fellow pedophiles that the new approach would be focused around garnering public sympathy by falsely claiming the intention was to prevent child sexual abuse by humanizing pedophiles.

To the members of BoyChat concerned Melsheimer’s organization would attempt to prevent them from sexually abusing children, he asserted: “Be assured you will find no current reference to the prevention of offending. You can take that to the bank.”

Speaking to Reduxx on the campaign by Virtuous Pedophiles, Dr. Alaric Naudé says it’s “utter propaganda” that most pedophiles are non-offending.

“We don’t know how many [pedophiles] there are. So how can you claim most of them don’t offend? It doesn’t make any sense. We don’t have any figures or a control … If we look at different data from different countries, it’s approximate that a pedophile will abuse between 3 to 5 children before they are caught.”

Dr. Naudé is a Professor focused on the social sciences and linguistics at Suwon University in South Korea. Earlier this year, Prostasia pressured The British Journal of Sociology and History to remove a research article he had published which expressed concern about their organizational goals.

The article, titled A Case Study via Sociolinguistic Analysis of [a] Covert Pro-Pedophilia Organization Registered as a Child Protection Charity, focused on how Prostasia claimed to be for child protection but advanced a narrative framing pedophiles as victims of an oppressive social structure.

Dr. Naudé says he became interested in pro-pedophile activists groups while researching propaganda for a separate article he published in 2021, and a subsequent book on linguistics.

“During my research, I went into how propagandists stifle dissent by using laws that are meant to protect people but twisting them,” he says, noting that he began to look into child protection policies and became aware of groups “claiming to want to protect children” but whose linguistic markers denoted that something else was their intention.

“It’s important to remember that pedophiles don’t just groom children,” Dr. Naudé tells Reduxx, “They groom the environment, and adults within the environment, so they are able to sexually abuse children without being noticed.”

Dr. Naudé takes particular issue with Virtuous Pedophiles claims about “child pedophiles,” which he says is just a ploy to “groom the public” into normalizing pedophilia.

“Children generally have affection for other children — that is normal between a similar age group. So what they’re doing is trying to say that children or teenagers who have some attraction to children in their own age group, or even slightly younger, are pedophiles. They are grooming kids into thinking they are pedophiles, when in fact they are just going through normal development.”

Dr. Naudé says there is plenty of help available for those who fear they might sexually abuse a child, but activists promoting the normalization of “minor attraction” don’t actually want it.

“If a person has pedophilic tendencies, they can go to a psychiatrist and they can be helped. There is cognitive behavioral therapy, which can be quite effective. But that’s if someone wants to change. The people who are using this ‘MAP’ terminology… they do not want to change. They use this as a cover.”