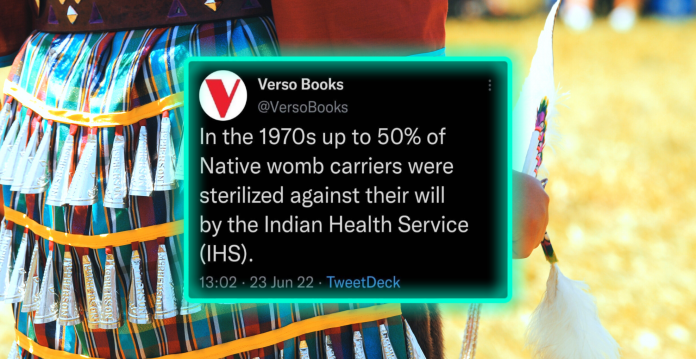 A publishing house was forced to delete tweets today after receiving a firestorm of backlash for calling Indigenous women forcibly sterilized under racist policies “womb carriers.”

Verso Books, a left-wing publishing house which has offices in the United Kingdom and United States, published a series of tweets on June 23 focused on the history of obstetrical violence against Indigenous women.

In an attempt to make their ordeals ‘gender neutral,’ Verso instead called them “womb carriers.”

“In the 1970s up to 50% of Native womb barriers were sterilized against their will by the Indian Health Service (IHS),” read the first tweet in the thread, continuing: “Stripping our womb carriers of their ability to have children is the continuation of over 500 years of misogynistic violence against Indigenous peoples.”

The Indian Health Service is a division within the United States Department of Health and Human Services which focuses on providing health services to Indigenous American tribes and Alaska Natives. The IHS was established in 1955, but has a long history of controversies surrounding its administration of services to Indigenous people.

In 1976, the U.S. Government admitted that a mass sterilization policy had been enacted by the Indian Health Service between 1973 and 1976. A study by the U.S. General Accounting Office found that 3,406 Indigenous women without their consent, validating research undertaken by Choctaw Doctor Connie Pinkerton-Uri years prior which had found that one out of every four Indigenous women had been sterilized. Some had even been given total hysterectomies under the lie that it was “reversible.”

Shortly after Verso’s tweets were posted, the publisher prompted outrage from women’s rights advocates who called out the language used as “dehumanizing” and erasing the unique, sex-based oppression within the practice.

Radical feminist Claire Heuchan responded to Verso’s thread writing: “*Women* were forcibly sterilized as part of the violent subjugation of our sex class. And you dishonor every last victim of this heinous crime by pretending that she was chosen for some arbitrary reason, as opposed to recognising this violation as racialised misogyny.”

Author of Give Birth Like A Feminist, Milli Hill also tweeted in response; “Imagine typing this out and clicking ‘tweet’ without even pausing to consider how calling women ‘womb carriers’ would absolutely delight the racists and misogynists who carried out the atrocity they are trying to highlight. Sheer idiocy.”

Other twitter users responded with similar incredulity, offended at the sexed nature of the practice being erased, and noting that only females could be impacted by such a barbaric practice.

“Such degrading language is only ever used to describe women. Not men. Native women were targeted SPECIFICALLY because of their sex class & their ability to carry children. Don’t minimise the horrors they faced by using this kind of language,” wrote user @AppleofSpring.

Verso Books, previously New Left Books, is a publishing house founded in 1970 which self-identifies as left wing. Many of their publications focus on promoting gender ideology, sex work, or transgenderism.

They have published books such as Revolting Prostitutes by by Juno Mac and Molly Smit, Trans: A Memoir by Juliet Jacques and the North American release of The Transgender Issue by Shon Faye.

Verso Books has also published the work of prominent Queer theorist, Judith Butler. Butler’s work, particularly her 1990 book Gender Trouble, has been seen as influential in distorting the language around women’s rights.

Speaking with The Guardian in 2021, Butler infamously said: “We need to rethink the category of woman” and “The category of woman can and does change.” Roughly eight hours after publication, an entire section of the interview was quietly pulled. In the deleted passages, Butler had said that “the anti-gender ideology is one of the dominant strains of fascism in our times.”

Although Verso sometimes publishes feminist literature, in 2021, they were accused of mishandling a sexual harassment complaint by a female employee.

Emily Janakiram, who described herself as “the newest and lowest paid employee, the only woman of color on full-time staff,” demanded an apology from the publishing house after she reported that Verso’s U.S. editor, Jake Stevens, had sexually harassed her.

“I was told that this was not the first time that Jake had behaved in a sleazy and inappropriate way with employees, and that in filing the first ever former complaint, I would be letting him know that we knew about this behavior and would no longer tolerate it silently,” she stated at the time.

During a meeting to discuss the incident, Jankiram suggested that they hire someone to conduct sexual harassment training at the office, but was told that “this was basically not cool and leftist enough for the hallowed halls of Verso.”

Many of the writers Verso publishes have facilitated the academic argument for the words “woman” and “man” to no longer refer to biological sex distinctions. This has resulted in alternative phrases such as “cervix havers, gestational carries, vagina owners” and even “bleeders” being used when referring to women’s reproductive health.

Researchers have found that women view these terms as dehumanising. A collaborative research paper led by Australian academic Karlene Gribble and included the work of 10 prominent women’s health researchers concluded that so called “inclusive language” had “consequences that have serious implications for women and children.”

“Desexing the language of female reproduction has been done with a view to being sensitive to individual needs and as beneficial, kind, and inclusive,” they wrote in the paper. “Yet, this kindness has delivered unintended consequences that have serious implications for women and children.”

Indigenous women are still disproportionately impacted by sex-based violence. The murder and disappearance of thousands of Native American, First Nation, Metis, and Inuit women and girls across the United States and Canada has been referred to as an “epidemic” that has gone overlooked for years.

According to Native Women’s Wilderness, Indigenous women and girls in the United States are murdered at a rate 10 times higher than all other ethnicities, and experience sexual violence at a rate of 2 times higher their white counterparts.

Homicide was the third leading cause of death amongst Indigenous women and girls in the United States aged 10 to 24.