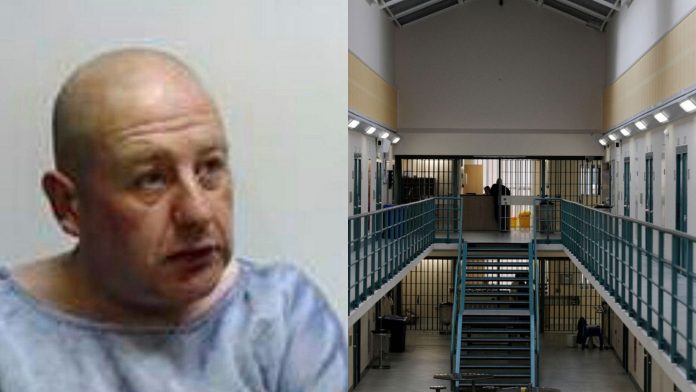 An incarcerated sex offender who abducted and raped his care worker is now claiming to identify as a “woman,” and demanding cosmetics and a transfer to a women’s institution.

Albert Caballero, 50, is currently detained at Edinburgh Saughton Prison, where he has served half of his sentence and is eligible to apply for parole. But Caballero is reportedly now boasting to fellow inmates that he will be transferred to a women’s prison prior to his release after abruptly claiming a transgender identity. In addition to now calling himself “Claire,” Caballero has been demanding red lipstick from the prison.

Insides sources at the facility spoke with The Daily Record and revealed that Caballero’s behavior had a “chilling effect” on other inmates. The source said: “There’s something about him that calls to mind Silence of the Lambs. He has mad, staring eyes and sometimes they just seem to go right through you.”

The unnamed source, who is said to be a senior staff member, continued: “There has been talk in the jail about the prospect of him seeking a move to be among women but, given his offence, I don’t see how anyone would risk it, even the most vociferous person in favour of self-ID.”

On December 27, 2018, Caballero abducted, physically assaulted, and raped a 25-year-old female care worker when she was visiting at his Edinburgh home.

Caballero had arranged for a meeting with the woman, who worked with The Action Group, an organization which provides housing and community support to those with additional needs. He told the woman he had difficulty with his locks, at which point she realized he had locked her in his home.

As she attempted to escape, Caballero blocked her exit. A struggle ensued, but Caballero ultimately overpowered and sexually assaulted the woman. Following the ordeal, he then repeatedly instructed her to contact the authorities, saying, “Phone the police. Tell them I’ve raped you,” and followed her to her car before she drove away.

Caballero also contacted emergency services himself to confess. The High Court in Edinburgh heard how Caballero told the call handler what he had done, and threatened to commit suicide by jumping in front of oncoming traffic.

Some time later, law enforcement officers discovered Caballero outside of a police station, where he told them: “I’ve raped someone. I’m guilty. I’ve done a very bad thing.”

The victim contacted her management in a state of distress, and the incident prompted an investigation by the Health & Safety Executive (HSE). The probe found that the woman’s employer had failed to make an appropriate risk assessment regarding the danger Caballero posed to female workers. It was also discovered that although Caballero had a history of “escalation of inappropriate behavior,” incidents were not being recorded properly.

The woman was so traumatized by the assault that she has since not been able to return to work.

In June of 2019, Caballero was convicted and sentenced to eight years in prison. He was placed on the sex offenders’ registry indefinitely, and will be made subject to a supervision order for an additional four years after his release.

Caballero is the third Scottish rapist to proclaim a transgender identity in the past week.

On January 15, a serial rapist who targeted women in changing rooms and restrooms reportedly had begun identifying as transgender and sought a transfer to a women’s prison. Jonathon Mallon, 40, was sentenced to life in prison in 2014 on a slew of rape charges. He has now begun referring to himself as “Charlene” and has allegedly been “bragging” that he will be in a women’s prison by the spring.

Days later, it was reported that a man standing trial for the alleged rapes of two women had begun identifying as transgender. Adam Graham, 31, now goes by the the name “Isla Bryson” and was referred to by feminine pronouns both in court and in UK media coverage. Graham has been charged with raping the women with “her penis,” according to court documents.

The slew of disturbing news comes just as Scotland is debating controversial new sex self-identification policies. In December, Holyrood passed the Gender Recognition Reform bill (GRR) which streamlines and eases the process through which an individual can change the sex markers on their official documents. The measures have been strongly opposed by women’s rights campaigners in Scotland.

Ashten Regan, Scottish National Party MSP representing Eastern Edinburgh, resigned from her post last October in a show of protest, saying she could not support “any legislation that may have negative implications for the safety and dignity of women and girls.”

Notably, an amendment to the bill put forward by Conservative Member of Scottish Parliament Russell Findlay which would have prohibited anyone convicted of a sexual offense from changing their legal sex markers was rejected.

On January 17, and for the first time in the United Kingdom’s history, Westminster chose to invoke a Section 35 Order to block the GRR bill from obtaining Royal Assent.

Under Section 35 of the Scotland Act of 1998, Secretary of State for Scotland Alister Jack can prevent a Holyrood bill from becoming a law if it is believed that the legislation would have an “adverse effect” on the application of laws reserved to Westminster.

Prime Minister Nicola Sturgeon has been determined to see the GRR bill passed, and referred to Westminster’s move to block the bill as a “full-frontal attack” on Scottish Parliament, according to the Guardian.

UK Prime Minister Rishi Sunak met with Nicola Sturgeon at a hotel in Inverness on January 12, where they are understood to have discussed the GRR bill in private.