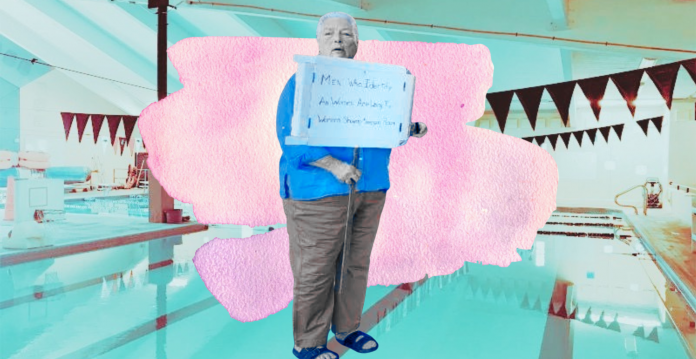 A senior woman who expressed discomfort regarding a trans-identified male in the women’s changing room at her local pool has been banned from using the facilities she frequented for over three decades.

Julie Jaman, 80, had been a guest at the YMCA-run Mountain View community pool in her small town of Port Townsend, Washington for over 35 years. Speaking to Reduxx, Jaman revealed that on July 26, she witnessed a trans-identified male using the female locker rooms at the pool, and became concerned due to the fact he appeared to be watching the little girls as they changed out of their bathing suits.

“I was showering [after a swim] and I heard a man’s voice … it was quite deep,” Jaman told Reduxx, “So I looked through the shower curtain. There was a man in a woman’s bathing suit, and he was near four or five little girls who were taking off their bathing suits. He was standing there watching them.”

Jaman observed the male through the opening in the shower curtain for a moment. Shocked by his presence and becoming increasingly distressed about his proximity to the children, she quietly asked: “Do you have a penis?” The male refused to answer, prompting Jaman to demand he leave the locker room.

Rowen DeLuna, the pool’s aquatics manager, was in the area at the time, and when Jaman appealed to her to remove the male from the restroom, DeLuna told her she was being “discriminatory” and threatened to call the police.

“She said, ‘you are being discriminatory, you are banned from the pool, and I am calling the police.’ I was totally stunned,” Jaman says, adding that she felt particularly vulnerable, being berated while nude. She quickly got dressed and left the changing room, immediately moving to leave the building. As she did, DeLuna continued yelling towards her.

“She said, ‘You are not following the [YMCA] values and principles,'” Jaman explained, noting that YMCA staff allegedly attempted to block her from leaving as she tried to go, telling her the police were on their way.

“I said ‘bullshit I can’t leave!'” Jaman scoffs, noting she immediately went to the Port Townsend Police Department, which shares a community complex with the pool. She explained what had happened to an Officer, noting it was extremely emotional for her.

“I kept thinking of those little girls, and it was really affecting me…” Jaman said, beginning to choke back tears, “It is affecting me right now. It was really unreal that would happen.”

The Officer gave her a card with the name of a Detective who was meant to call her later on, but she was ultimately contacted by Officer Mark Titterness, who took a formal report from Jamal on the incident.

The male in the locker room was identified by a local citizen journalist as Clementine Adams, a transgender employee of the YMCA, though Jaman says he wasn’t displaying any indication he was staff. According to a GoFundMe managed by Adams, he began identifying as a woman in December of 2021, but only announced his transition in April of 2022.

In response to her ban, on August 1, Jaman, who has been an active citizen of Port Townsend for 40 years, chose to stand outside of the pool with a sign intended to inform other women that males were using the women’s facilities inside. A small number of majority elderly women turned up to support Jaman.

On Facebook, trans activists encouraged each other to rally in counter-demonstration, with several showing up with LGBTQ Pride Flags and berating Jaman and her friends.

“They said: You can’t say those things. You’re being a bigot,” Jaman said, “They told men males can be women. I said I don’t agree with [your] ideology. I told them that in all my 80 years I had never run into this.”

While most pool patrons remained politely curious about Jaman’s sign, she says that at one point, a mother had her 9-year-old child come up to her and tell her she was being “hurtful” to the LGBTQ community.

Jaman also contacted Wendy Bart, the CEO of the Olympic Peninsula YMCA which oversees Mountain View pool. While she initially had to leave a message, Bart contacted Jaman later that day in what she described as akin to an interrogation.

“Even after I explained what happened, she kept asking ‘what did you say?'” Implying Jaman was not being forthcoming, “She said ‘that’s not what I have been told,’ and I asked her what she meant.”

Jaman says Bart informed her the Mountain View staff had claimed she had been vulgarly abusive towards the trans-identified male.

“She told me she’d heard I said something to the effect of ‘you’re going to use your penis to f*ck those little girls.’ I am an 80 year old woman! I do not speak that way! I told [Bart] that.”

When Jaman asked Bart why no signs had been posted informing women that males could potentially be in the locker rooms, she says she was told: “‘We post pride signs, and we assume that lets women know what to expect.'”

That same day, Jaman went to the Port Townsend City Council meeting to share her experience and issue a complaint on the community pool’s policy. In a three-minute speech she gave to the Council, she explained what had happened at the pool on July 26, and requested separate facilities be made available for females.

“The YMCA policies on gender identity use ‘pride’ as a euphemism to prevent discrimination against one group of people but at the expense of another group – women who don’t want to use all-gender bathing or dressing areas,” Jaman said in her address to the Council, continuing: “Just as the City has installed special doors and spaces for handicapped people, the YMCA should provide an all-gender changing area as well as binary facilities to accommodate all patrons.”

Following her speech, Jaman was met with boisterous applause and cheers by other local community members who had attended the council meeting. But another woman took the stand to oppose Jaman, stating she had driven from a distance to oppose Jaman’s perspective.

“I would just like to state that this individual is not a man identifying as a woman, this individual is a woman.” Rebecca Horasct of Sequim, Washington said, “It is inappropriate in this day and age for people to not recognize what transgender means.”

Following Horasct, a man took the stand to similarly call the gender binary “ridiculous,” and “unscientific,” adding that he found Jaman’s “bigotry deplorable.”

Multiple other citizens took the stand, most in support of Jaman and her concept of an exclusive alternative space for women and girls. One mother who was an active swimmer took the stand to state she felt that “little girls were just going to quit swimming” if they didn’t have an exclusive, safe space.

Mountain View pool has issued a press release in response to the protest, in which it states: “We will not tolerate bias, hatred, or discrimination that leads to the oppression of individuals or communities. We will ensure sustained and meaningful progress toward equity and human dignity for all.” The release also references Washington State Law 162-32-060.

The law states that public facilities must allow individuals access to spaces “that are consistent with that individual’s gender expression or gender identity,” continuing that if an individual expresses discomfort they should be “directed to a separate or gender-neutral facility.”

Reduxx reached out to Erin Hawkins, the Marketing and Communications Manager for the Mountain View Pool, for comment, and was told Jaman was permanently banned because she had violated the pool’s policies “repeatedly.” But when Hawkins was asked what other incidents Jaman had been involved in, and on what dates those incidents occurred, she was unable to give any specific details.

While Hawkins asserted Jaman had been extremely rude towards the trans-identified male staff member, she confirmed there was no evidence of what the pool staff had claimed she had said beyond their own self-reported incident writeup. Hawkins stated that the pool staff had not filed a police reported against Jaman, but were planning to in the future as a form of protection from her claims.

Hawkins added that her solution to females who felt uncomfortable changing around males were to use bathroom stalls, which are located in the same gender-neutral area. She also suggested closing the shower curtain was an appropriate solution for privacy and safety.

But Jaman doesn’t find this to be an acceptable guidance.

“The law says that if someone does not want to use the gender neutral dressing or toilet room, they can use an alternative. But it is up to the [pool] to provide that alternative. That’s the law. Last year, they said there was an additional space, but they have misconstrued that.”

On the issue of self-identification, Jaman says she was never active in the gender identity debate, having no form of social media, no smart phone, and limited knowledge of how to use a computer. She calls it a “radical cultural change” that she feels is eroding women’s right to dignity across the board.

Four decades ago, Jaman helped establish the first crisis shelter for women and children in the Port Townsend community after often offering up her own home as a safe space for women fleeing violence.

“We subsequently built Dove House, which was a shelter for women victims. I’ve now been told it’s for everyone. I don’t know if now they let men who identify as women in the women’s sleeping area … they don’t ask for sex anymore, they just ask for gender identity.” Jaman adds that she knows of many areas in the community that have become gender free-for-alls, and expresses concern for how it is being handled.

“I think there is something very wrong with cancelling out what’s a male and what’s a female. There is absolutely no way that a person who is any form of XY can possibly be an XX. There’s just no way.”

Jaman says she has been a Democrat voter, and was active in voter registration drives and anti-war protests in her younger years, but expresses weariness as to how this new push for ‘tolerance’ is manifesting.

“It’s darn-right confusing,” Jaman says. “I am from the old-school. I know what being discriminated is about. I know about human dignity. I marched against the Vietnam war. I know all about racial discrimination against people of color. I know about the need for tolerance … But I don’t get this.”

On her incident in the locker room, Jaman expressed some surprise when she learned Clementine Adams had only begun identifying as a woman within the last few months.

“I have been a woman for all of my 80 years. I don’t intend on changing. But it erases me. Because if that’s a woman… what am I?”