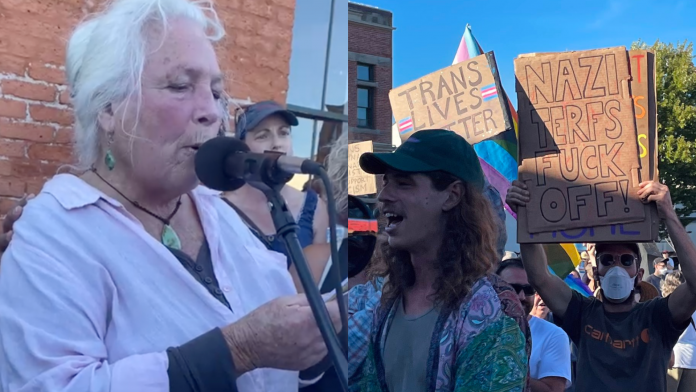 A peaceful demonstration held by women’s rights activists in support of an 80-year-old woman banned from her local pool was interrupted by aggressive trans activists who heckled the women as they spoke and attempted to destroy their equipment.

The demonstration took place yesterday evening in the small community of Port Townsend, Washington, a city with less than 10,000 residents that has become a hub for debate on women’s single-sex spaces after an 80-year-old model citizen was banned from the community’s pool after expressing concerns about a male in the women’s changing room.

Julie Jaman had been a guest at the YMCA-run Mountain View community pool for over 35 years. Speaking to Reduxx earlier this month, Jaman revealed that on July 26, she witnessed a trans-identified male using the female locker rooms at the pool, and became concerned due to the fact he appeared to be watching the young girls as they changed out of their bathing suits.

Jaman, who was herself nude as she was showering after a swim, demanded the male leave, but was quickly met with outrage from Rowen DeLuna, the pool’s aquatics manager who was in the locker room at the time. DeLuna berated her for being “discriminatory.”

“She said, ‘you are being discriminatory, you are banned from the pool, and I am calling the police.’ I was totally stunned,” Jaman says, adding that she felt particularly vulnerable, being yelled at while nude.

As news of Jaman’s ban from the pool began to spread, many took to social media to condemn the Mountain View Pool and the Olympic Peninsula YMCA and demand Julie have her membership reinstated.

On August 15, feminist activists associated with pro-safeguarding collective RevFoxxUSA organized a press conference near the Mountain View Pool in support of Jaman, inviting the senior citizen to speak about her experience. But the women were met with extreme hostility from trans activists, who had begun organizing a protest as soon as word of the press conference began to circulate on social media.

Gabrielle Clark, a free speech advocate and founding member of RevFoxxUSA, said the activists became so aggressive that she was genuinely frightened for Jaman’s safety, and the safety of the supporting women in attendance.

“We were attacked by [trans activists]. Fully grown men were getting in our faces, shoving, verbally abusing us, and attacking our equipment … Most of us were senior women. These were feminists who protested in the 1970s for women’s rights.” Clark, who travelled from out of state to assist with the conference, says.

Clark explains she had been introduced to Jaman by Amy Sousa, another founding member of RevFoxxUSA who lives near Jaman and has been a vocal advocate rallying support for her cause since her ban.

Clark was standing next to Jaman for almost the entirety of the conference, giving her words of encouragement as the increasingly vocal activists shouted her down and heckled her. At one point, an activist rushed behind Clark and ripped down the suffragette flags that had been pinned on the wall. But Clark didn’t let them go without a fight, immediately acting quickly to chase down the activist.

“I got a hold of the flags and yanked them back. I’m not letting anyone take anything from me again. Including my dignity.”

A woman in attendance at the event, asked only to be identified as Nora, said she witnessed one of the trans activists attempt to destroy the phone of a man who had been helping out with the press conference.

“I saw one counter protester grab [his] phone and run away with it … they threw it on the ground and tried to crush it with their foot before it was recovered,” Nora says, “I was approached by someone who verbally abused me despite standing quietly at the periphery, holding my signs and saying nothing.”

Nora also told Reduxx that many of the trans activists were physically aggressive with the women in attendance.

Port Townsend Police were present at the event, but many of the women who spoke to Reduxx affirmed they did very little to keep the peace.

Gabrielle Clark says Amy Sousa had contacted the police prior to the event to request support, and that other women associated with RevFoxxUSA listened to the call over speaker in which Police Chief Olsen told them law enforcement would be available.

“We called them ahead of time to make sure that they would be there to keep the peace. They assured us that they would. We told them that there would be mostly seniors,” Clark explains, “[But] police did nothing. They let the mob attack senior citizens. They could have kept the peace but they hid around the corner.”

During the live-broadcasted stream of the press conference, primarily male voices are heard screaming at the women and attempting to drown them out with chants.

Some pro-woman advocates in attendance have shared a photo on social media of a heavily-tattooed man they say was one of the most vocal hecklers. The bearded individual was wearing a t-shirt with a lynched klansman on the front.

Lynn Chadwick, a signatory of the Women Declaration and an advocate for parents of children with rapid onset gender dysphoria, says there were “at least 200” trans activists aggressively demonstrating against 30-40 women.

“I’ve been involved in feminist advocacy since early 2019. I lost my kids, all three, to the gender cult. The feminists were there to catch me. That’s when I began to see things through new eyes,” Chadwick says, “When Julie was born we had only had the vote for 20 years. I’m sure the women who fought so hard for our rights would never have envisioned this.”

Chadwick says the trans activists became so aggressive at one point that she was forced to call 911.

“They were shoving and pushing us hard. I turned around and told them, ‘you need to stop touching us. Right now. Stop touching us. It’s assault and I will file a report.’ They continued shoving us. They ripped down our flags and ran off with them. My friend had her sign stolen and ripped to pieces.”

After calling 911, Chadwick says she was told officers were already on the scene, but she says she didn’t see any police amongst the vicious section of the crowd to turn to for help, and that the officers were instead at the very periphery, standing in an area where nothing was at risk.

“There were a lot of older women who were very frightened,” Chadwick noted.

Despite the aggression, Gabrielle Clark says she was moved by the opportunity to stand alongside Julie Jaman and the other women in attendance, many of whom she says were fighting for women’s sex-based rights before she was born.

“Being a woman is a birthright. Nobody is going to take it away. It’s sad that a couple dozen octogenarians are being accused of bigotry when those very same people fought for all our rights half a century ago.”