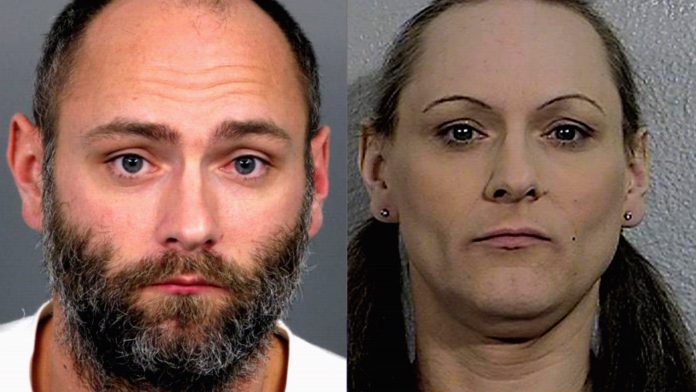 A man who murdered his infant children and was sentenced to death has now been turned loose into general population at a California women’s prison after beginning to identify as transgender just a few years ago.

Jason Hann was arrested after the remains of his 10-week-old daughter, Montana, were discovered in Arkansas. The little girl’s body was found in an advanced state of decomposition and stuffed in a tupperware container onboard an RV trailer once owned by Hann after the vehicle had been repossessed and sent to auction. The buyer of the RV discovered the body in February of 2002, and called police.

Montana’s corpse had been in the plastic tub for approximately one year before she was found, and it was determined that the girl had died of a fractured skull.

Police were quickly able to connect the trailer to Hann, and he and his girlfriend, Krissy Werntz, were found and arrested at a motel in Oregon in April of that same year.

During the multi-state investigation into Montana’s death, law enforcement discovered a second child’s body in an Arizona storage locker rented by Hann, the remains belonging to his 6-week-old son who he had murdered by head trauma in 1999.

In both cases, Hann had apparently kept and travelled with the bodies before finally storing them.

Disturbingly, when law enforcement initially went to arrest Hann and Werntz at the Oregon motel, they discovered a third infant child who was already showing serious signs of abuse, including a dozen broken ribs, retinal hemorrhaging, bleeding under the skin, and internal injuries. The child was reportedly on “the brink of death,” but was given immediate medical attention and placed into protective custody.

In February of 2006, Hann was sentenced to 27 to 30 years in prison in the case of his son’s death. In 2013, he would be given the death penalty in the case of his daughter’s after jurors were allowed to take into consideration his other conviction.

Werntz, the mother of the infants, was sentenced to 15 years to life for the death of her daughter but avoided any charges in the death of her son. During her trial, Werntz stated Hann threatened to murder her if she went to police.

In 2019, Hann began to identify as a woman named Jessica, and demanded the state provide him the necessary “gender affirming” accessories such as hormones, bras, makeup, and hair rollers while he was incarcerated in San Quentin. He also requested a legal name change, sex reassignment surgery, and a transfer to a women’s facility.

It is unclear when Hann received his surgeries, but in 2020 he was moved to death row at the Central California Women’s Facility (CCWF).

Krissy Werntz, the mother of Hann’s three children, had been held at CCWF after her conviction in the case of her murdered infant daughter.

According to Amie Ichikawa, founder of incarcerated women’s rights advocacy non-profit WomenIIWomen, Werntz just barely managed to secure a transfer prior to Hann being allowed to integrate into general population from death row.

Ichikawa told Reduxx that in 2019, California Governor Gavin Newson signed an executive order suspending the death penalty in the state and mandating a stay on execution for all inmates on death row, including Hann. As a result, death row inmates are allowed to move into general population after a cursory observation period.

Ichikawa says Hann was in administrative segregation until just last week, and Werntz was granted transfer out of CCWF just days before Hann was turned loose.

“I have lost so much sleep over this case,” Ichikawa says, “Knowing that there was a huge possibility that she wouldn’t get out in time was freaking me out.”

Werntz was moved to the California Institute for Women, and is eligible for parole in 2023.

Last year, the Women’s Liberation Front (WoLF), a legal activist group dedicated to advocating for women’s rights, launched a lawsuit against the California Department of Corrections over the implementation of a bill which mandated accommodations for inmates in facilities consistent with their gender self-identification.

WoLF filed the complaint on November 17, 2021, on behalf of women who are currently or were previously incarcerated. According to the suit, female inmates are facing sexual and physical abuses at the hands of male inmates who have identified their way into women’s correctional institutions by claiming to be transgender.

According to the press release issued by WoLF on the lawsuit, “Men are eligible for transfer regardless of whether they have had surgery on their genitals, have taken hormones, or been diagnosed with gender dysphoria.”

The suit asserts that there is no way for S.B 132 to be implemented without violating the constitutional rights and safety of the female inmates.

Since S.B 132 – The Transgender Respect, Agency and Dignity Act – was put into law, at least 23 male inmates have been transferred into women’s prisons, with hundreds more requesting placement since and no request has yet been denied.