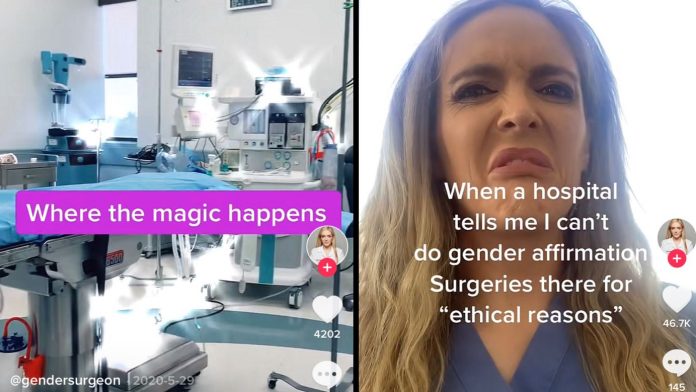 Disturbing details uncovered by internet sleuths found that a surgeon infamous for advertising invasive “gender affirming” procedures on TikTok removed the breasts of a 13 year old girl, who is now also pursuing a hysterectomy at age 15.

On December 15, KiwiFarms user Falling Star made a disturbing find which they write indicates Dr. Gallagher performed a cosmetic mastectomy on a minor girl.

Following the path of a review left for Dr. Gallagher which included the patient’s social media links with ample information on the minor’s personal details, Falling Star noticed social media posts indicating the reviewer had been just 13 years old when Gallagher had operated on her.

In a trail of Reddit comments, the girl, whose social details won’t be shared here, states she had started testosterone at 13, but had been seeing psychiatrists since she was 5 and had also been attending a gender clinic “for a few years.”

Perhaps most disturbingly, the girl is actively pursuing a hysterectomy – a total removal of the uterus – and states she will “likely have it by 15.”

In the post, the girl seeks advice from other female-to-male transgenders who have had hysterectomies before age 17, and notes she has already been in touch with a “social worker” who is helping her find proper insurance coverage for the permanent, irreversible procedure.

The girl, whose social media information will not be shared here, is also a top moderator of the phalloplasty subreddit – a board dedicated to female-to-male transgenders seeking and discussing the surgical creation of a penis for the purposes of gender affirmation.

On Dr. Gallagher’s website, she states that minors are welcome to consult at her office with the permission of parents and the “recommendation of the patient’s mental health professional.” Letters recommending surgical intervention for gender identity concerns can be acquired online from certified mental health providers and/or surgeons for as little as $150.

According to Gallagher’s site, “it may well be much more detrimental to the patient to wait until the age of 18 for surgery.”

Despite explicitly providing the child’s age, the clinic attempted to book a consultation with us, noting that the cost of the surgery would be around $10,000.

For comment, Reduxx reached out to Sinead Watson, a vocal member of an active and growing online community of detransitioners – people who ended their gender transition after feeling regret.

“Let’s call this what it is: child abuse.” Watson says, “How can you take someone who obviously has so much developing to do and [claim] she understands the long-term, permanent ramifications of cross-sex hormones and surgeries? How can you alter someone’s body surgically when their body hasn’t finished growing yet? It’s cruel.”

In her own experience, Watson had taken testosterone for 3 years after deciding she was male, but later realized her feelings came from a struggle with misogyny and trauma. Watson has described having been immediately “affirmed” by clinicians, with all of them failing to investigate her history of trauma, suicidal ideation, and other mental wellness concerns.

Calling Dr. Gallagher “unprofessional and predatory” for advertising surgeries to minors on TikTok, Watson notes that “she obviously knows the primary consumers are going to be young … and she makes [surgery] sound like it’s no big deal.” Watson goes on to say that in her opinion, what Dr. Gallagher is doing is “tantamount to child abuse.”

Watson concludes that in the girl’s case, her stating she has received mental health care from the age of 5 would suggest she has unresolved concerns that should have been addressed prior to surgical intervention. She says that studies on detransitioners have consistently found that they report receiving inadequate medical assessments, as well as having co-morbid mental health concerns that were never addressed.

“I think before we go about cutting up children’s bodies, we should really make sure they are mentally well and there’s not something else going on that, if addressed, could prevent unnecessary, irreversible surgeries.”