Reduxx has obtained details on the identity of the trans-identified detainee who is alleged to have sexually assaulted a female inmate while in custody at the Justice Center in Hamilton County, Ohio.

On January 4, FOX 19 reported that the Hamilton County Sheriff’s Office (HCSO) was investigating an alleged rape that had taken place between two detainees at the county jail. The perpetrator was described as a trans-identified male who had been sharing a cell with the female detainee. The HCSO had the male detainee listed as a “female” for the purposes of their classification.

While neither parties were named by FOX 19, Reduxx has now learned the identity of the alleged perpetrator after speaking with the Sheriff’s Office.

Michael Cole, also known as Michelle, was in the Justice Center awaiting trial after having been deemed a “violator at large” by the Ohio Department of Rehabilitation and Corrections. Cole had escaped a local halfway house and had been placed in custody after being located by authorities.

Cole has a lengthy criminal history spanning multiple states, and a perplexing track record of court documents referring to him both by male and female pronouns.

In 2011, Cole was charged in Indiana for operating a vehicle while intoxicated, or drunk driving, and was to serve time at Steuben County Jail. The next year, Cole was indicted as a fugitive in Ohio, and later appeared in Indiana’s Steuben Circuit Court for his failure to return to lawful detention following his drunk driving charges. He was sentenced to serve time at a local county jail. According to a Cleveland.com report, Cole has had other felony convictions dating back to 2012, including for robbery, domestic battery and receiving stolen property.

In 2017, Cole and his then-fiancée were indicted on charges related to the 2016 murder of another trans-identified male Cole had met through a “transgender support group” on Facebook. The victim, Brandon aka Brandi Bledsoe, had agreed to meet with Cole in person for drinks at a local bar in Akron, Ohio on the night of October 7, 2016.

The next day, Bledsoe’s body was found dumped in the driveway of a residence in Cleveland’s east side. The victim was described as “wearing only underwear and had white plastic bags covering [his] head and both hands,” according to police reports. The corpse was found by a 5-year-old boy while he and his 12-year-old brother were out riding their bicycles. The victim died of a gunshot wound to the chest, but the medical examination also indicated trauma to the head.

Court documents from Cuyahoga County, where the murder took place, were very carefully worded and suggested some confusion as to what pronouns to use to reference Cole. At the time, it was reported that Cole “[did] not exclusively identify as a man or a woman.”

Cole was then sentenced in 2018 to serve six years in prison for the charges of tampering with evidence, obstruction of justice, and gross abuse of a corpse. The charges for aggravated murder and two felonious assaults were nullified. Presiding judge Pamela Barker referred to Cole with “his/her” pronouns and stated that the “defendant is a transgender individual,” but official court documents still listed his gender as male and he was initially sent to serve his sentence at Lorain Correctional Institution for men.

At some point during his detention, Cole was transferred to a women’s institution.

Reduxx found that a 2020 letter from Cuyahoga County Court denying Cole’s motion for judicial release was addressed to the Dayton Correctional Institution, a facility which houses female inmates.

Following the January 4 rape allegations, Cole was moved from the Hamilton County’s jail back into the custody of the Ohio Department of Rehabilitation and Corrections. Despite being booked as a male under his male name, Cole is at the Ohio Reformatory for Women (ORW), a female facility. Reduxx received confirmation from the ORW that Cole arrived to the facility on January 6 and is currently pending a returned violation hearing.

An ODRC spokeswoman had previously confirmed that Cole is being housed in the infirmary and is separated from the general population at the women’s prison. He will be at this facility serving the remainder of “a sentence that expires soon.” Cole’s expected release date for the 2018 charges associated with the murder of Brandi Bledsloe is Monday, January 30, 2023, but as the investigation into the alleged rape continues, he may face new charges in coming weeks.

Following the alleged January 4 rape, the victim immediately reported what had happened to a corrections officer. She stated that she had woken up to Cole’s hand over her mouth in an apparent effort to silence her during the ordeal. She was taken to the University of Cincinnati Medical Center to be examined by a Sexual Assault Nurse Examiner.

While Cole reportedly told detectives it was not “physically possible” that he could have raped the woman, court documents reportedly containing photos of “male genitalia” were obtained by investigators. Cole also told detectives that his “classification” had been sorted out at the state level, and that he was a “female.” 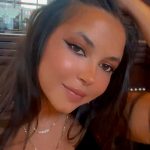