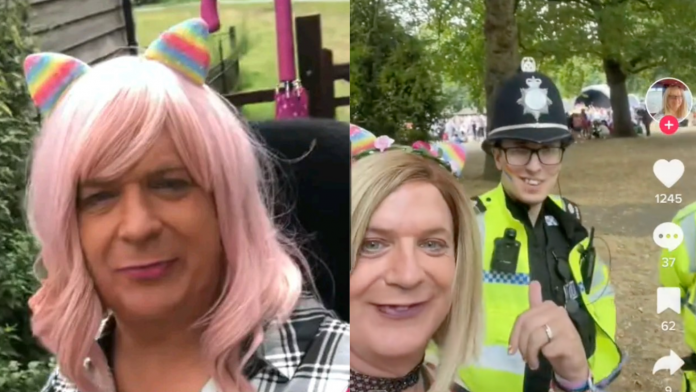 A UK-based transgender TikToker has been revealed as a violent criminal who was sentenced to 9 years in prison after being convicted of a vicious rape attempt on a vulnerable woman.

Jason Croker, of Oldbury Close, Redditch, was required to register as a sex offender for life after what was described as a “wicked” attempt to sexually abuse a woman.

In February of 2015, a Warwick County Court heard how Jason Croker, then 38, brutally attacked a woman in the back of his van in May of 2013 before strangling her and leaving her unconscious in a remote area. Croker had known the woman for several years as a friend.

Croker had lured her on the premise of being in need of help with moving his belongings. Instead, he drove her to a secluded field in the countryside and demanded sex from her using graphic language. When she refused, he physically attacked her.

During the hearing, Prosecutor Harpreet Sandu noted that her resistance “unfortunately did not prevent Mr. Croker from trying to get what he wanted and trying to take advantage of his friend whose generosity he had preyed upon … He got back into the driver’s side. She was effectively trapped. He tried to force her clothes off. He pinned her down and undid his trousers while continuing to hold her down.”

Croker also threatened the woman with rape if she didn’t comply, but the victim continued to struggle, hitting Croker in the head in an attempt to get away. Prosecutor Sandu noted that her efforts were in vain, and Croker eventually overpowered her and began to grope her sexually.

Croker then choked the victim, causing her to lose consciousness. He dumped her in the field and fled. Upon regaining consciousness, the woman managed to hobble to a nearby street and flag down a car for help. The woman was admitted to a local hospital “with injuries consistent with what she said had happened,” according to Prosecutor Sandu.

Judge Richard Griffith-Jones, when sentencing Croker, said: “This was wicked and deceitful selfishness. You made up your mind you were going to gratify yourself sexually with this poor woman.” The Judge also added that Croker had used “considerable violence” on the victim, and that “she could have died.”

The verdict from the jury hearing the case was unanimous, and Croker was sentenced to 9 years, of which he served just under 5 in prison.

Disturbingly, since being released, Croker has apparently begun identifying as a woman named Jayde Palmer and accumulating followers and friendships on social media amongst people unaware of his past. Croker was well-known in the Norfolk and Suffolk areas for going live on TikTok every night, often from his boat, and had accrued considerable gifts and donations from his presence along with over 10,000 followers.

The information on Croker’s criminal background began circulating this past week after it was brought to light by other TikTokers who said their intention was to warn women in the local community — especially those who had unknowingly befriended Croker.

Dozens of TikToks were created and released by various accounts demonstrating a multitude of connections between Croker’s past and his new identity by reviewing his extensive social media history. Prior to calling himself Jayde Palmer, Croker also went by Jay Adams.

After the accusations began to gain significant traction, with some videos wracking up tens of thousands of views, Croker himself came out and confirmed the speculation about his past identity, but insisted he had been wrongly convicted on trumped-up charges.

Croker repeatedly asserted police had no evidence upon which to convict him, a statement which contradicts what the Judge presiding over his conviction had said at the time of the trial. During sentencing, Judge Griffith-Jones had praised the case as having been “extremely well-investigated and well prepared.”

Following the admission that he had been accurately identified, Croker suggested that if pressure continued to mount against him, he would simply change identification once again.

“If I get hounded out of my house because of this, I will have a new ID, you won’t know if I am living next door to you … I will get a new ID, a makeover, the lot. Bear that in mind.”

Since a number of women have begun circulating the information in the local area, they have faced targeted reporting from Croker’s supporters, and numerous videos in which they have compiled evidence and alerts have been removed. But videos associated with Croker’s case have gone viral, with the most popular wracking up over 140,000 views.

On his own TikTok, Palmer took to mocking his critics, posting videos with Police while in his area, and even asking to be put in the back of a Police car for a photo at a Pride parade.

“For some strange reason, I haven’t been arrested today by the police,” Palmer joked into the camera. The officers, who had rainbow Pride paint on their faces, asked in response, “Do you need to be arrested?” Palmer then said that he had been arrested before.

One commenter beneath the video asked why Palmer had been arrested, to which he replied “cos [sic] I was bad.”

Palmer has also been accused of having recently been in contact with an account belonging to a minor boy, with screenshots being circulated alleging Palmer had asked to meet the child for the purposes of sex, but Palmer has not addressed the allegations.

On August 10, TikToker @thefactfreak8, conducted a live interview with Palmer in order to confront him on his continued denial of the rape attempt conviction. During the conversation, Palmer stated that he was released from prison in 2019, but maintained that he was not guilty of the charges for which he was convicted. Palmer has since locked down his account.