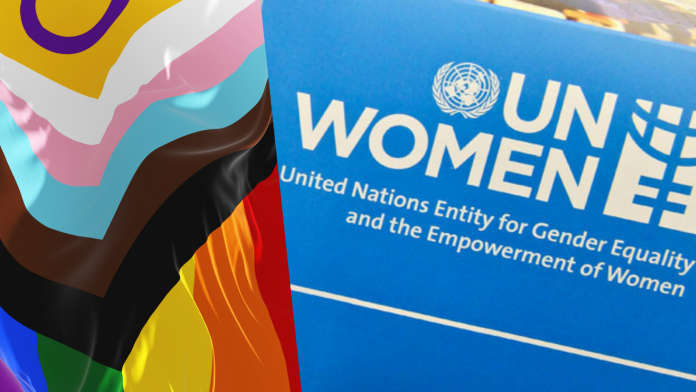 The UK branch of United Nations Women has sponsored an art exhibition that will see a percentage of proceeds donated to Mermaids, an organization that promotes the medical transitioning of children.

Mermaids CEO Susie Green explained in a 2017 TED talk how she took her 16 year-old son to Thailand to have him surgically castrated because he enjoyed playing with toys designed for girls. Green, who has said she initially thought her son was gay, had given her son puberty blockers as a child and has joked about the size of his genitalia, which did not develop properly as a result.

Green has worked with and recommended Gender GP founder Helen Webberley, who has been investigated by the UK’s General Medical Council (GMC) for running an illegal gender identity clinic with her husband which provided hormones to children as young as 12 years old.

One child that was illegally provided with cross-sex hormones by Webberley, Jayden Lowe, went on to commit suicide, prompting outcry from her parents. Jayden’s mother had no idea the clinic supplying these drugs was unregulated and she demanded a second inquest after learning the truth. The girl’s mother told Cambridgeshire Live, “I was really upset to realise they were knowingly practicing and they weren’t registered properly.”

In order to bypass regulations, the Webberleys moved their business first to Spain, after which it was acquired by a mysterious company in Hong Kong. Relocating their operation allowed the Webberleys to continue selling hormones illegally.

In a statement made during a September 2021 tribunal over giving harmful wrong-sex hormones to children, Webberley revealed that her criteria for her competence to supply the drugs came from a self-assessment and encouragement from Mermaids CEO Susie Green.

Mermaids has also received criticism for teaching gender ideology in schools, and in particular for presenting a gender identity chart featuring a Barbie doll and a GI Joe. After campaigning conducted in part by the Safe Schools Alliance and Transgender Trend, public scrutiny caused the charity to backtrack on telling children that they could be “born in the wrong body,” strongly implying in a social media post that they had never done so.

The charity has been widely criticized for touting spurious suicide statistics and for popularizing the line, ‘better a trans son than a dead daughter.’

Mermaids had received funding from the Department of Education and reported an income of over £1.8 million during the fiscal year 2020 – 2021. Mermaids also received a £500,000 grant from the National Lottery in 2019, and once partnered with Starbucks, the coffee company, selling special “mermaid” cookies with proceeds going to the organization.

This is not the first time UN Women has openly supported gender identity ideology. On International Women’s Day in 2020, their official twitter account endorsed a statement made by a man who claims a female identity, referring to women as “formless.” The man being celebrated by UN Women, model Aaron Philip, bragged about being platformed by the United Nations and referred to women who protested as “TERFs.”

In 2021 pharmaceutical giant Bayer announced their partnership with UN Women through an initiative called the UnStereotype Alliance. Bayer manufactures hormones marketed towards, among others, those who identify as the opposite sex: oestrogen Progynova, and injectable testosterone, Nebido.