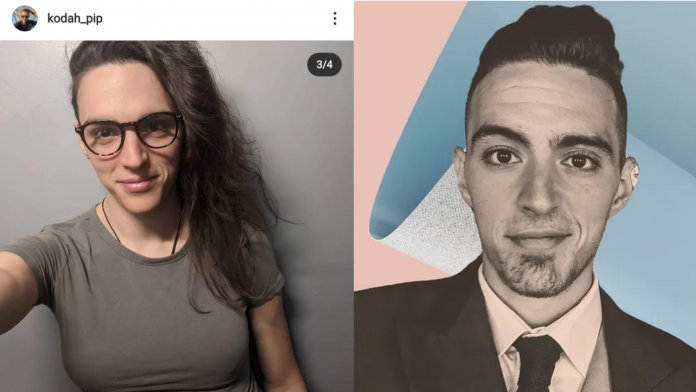 A male who identified as a lesbian and had the sole lesbian representative removed from Baltimore’s LGBTQ Commission while pushing lesbophobic sentiment in 2018 has quietly detransitioned.

Kodah Pipitone, *birth name John Francis, but also previously known as ‘Ava’, was instrumental in having lesbian advocate Julia Beck kicked off the commission and shunned as a “TERF,” then sponsored an event which advertised that “exclusionary” lesbians would be “hung [sic] by their necks.”

In 2018, then going by the name ‘Ava’, Pipitone was both president of Baltimore’s Transgender Alliance and an advocate for the global pimp lobby, the Sex Workers Outreach Project. In order to make the LGBTQ Commission as “inclusive” as possible, Pipitone was invited to their meetings by Mayor Pugh.

At a Pride parade in June of 2018, Beck marched with signs that read, “Dykes Don’t Like Dick”, “Lesbian NOT Queer,” and “Violence Against Lesbians is an Epidemic,” among other slogans. According to Beck in a piece she wrote for AfterEllenon her experience, “Bystanders cheered, clapped, and took pictures with us. Some whispered thanks while others shouted, ‘Go home TERFs!’ Twitter blew up trying to find the notorious dykes who crashed Baltimore Pride. I was doxxed and multiple friends, including one woman who was not a part of the protest, received threats.”

Beck’s statements at Pride prompted criticism from her entirely male colleagues on the Commission. During a meeting which took place that month, Pipitone asked Beck point-blank to identify his sex. She responded, “You’re male,” to which Pipitone replied by accusing Beck of violence. Over the course of the next few months, Pipitone actively campaigned to have Beck removed from her position.

In October of that same year, Jabari Lyles, the mayor’s liaison, scheduled a meeting with Beck to ask her if she believed that transwomen could be lesbians, and by December, Beck was unanimously voted out of the LGBTQ Commission.

Pipitone, meanwhile, was being featured in local media and was named one of Baltimore magazine’s “Faces of Pride,” even as Beck was slandered in Gay Star News with the headline: “Lesbian TERF Booted as Leader of Baltimore’s LGBTQ Commission, Goes on Fox News.”

In 2018, Pipitone was granted $15,000 by a Johns Hopkins trust to create “affordable housing for the LBGTQ community.” The project, known as HostHome, would ultimately go on to raise nearly $90,000 in funding, but there would later be concerns raised as to what Pipitone had actually achieved with the money.

In 2019, Pipitone was invited to speak at the Women’s March in Baltimore and was subsequently protested by lesbian activists due to the violent rhetoric he’d directed at the lesbian community.

But Instagram posts by Pipitone show that he no longer identifies as a lesbian woman, having quietly detransitioned. Instead, he now advertises himself as a techno-futurist, tagging his selfies “biohacker” and advertises his desire to “reverse engineer age.”

Julia Beck slammed Pipitone in a recent Facebook post after having discovered he’s dropped his ruse, claiming that he’d “traded one cult for another.”

Having been a victim of Pipitone’s temporary venture into her identity, Beck said, “It’s fine to find yourself in life. If only the process for men like him didn’t involve traumatizing women or pretending to be one.”