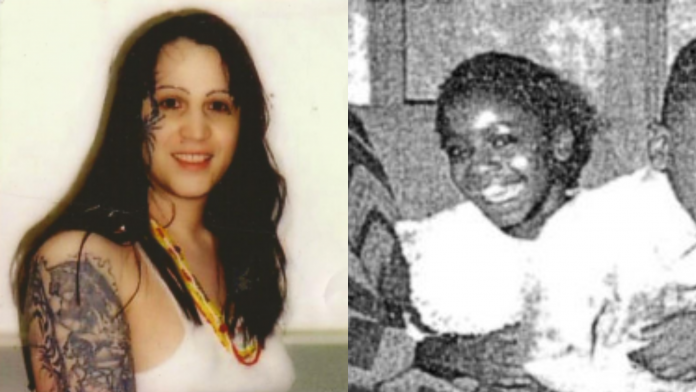 Content Warning: This article contains graphic details of a crime committed against a child. Reader discretion is appreciated.

A trans-identified male who brutally raped and tortured a little girl to death has completed his sentence and been fully released from New York Department of Corrections and Community Supervision custody.

Synthia China Blast, born Luis Morales, was sentenced in 1996 for the horrific rape and murder of 13-year-old Ebony Nicole Williams. Blast, along with his boyfriend Carlos Franco, were sentenced to 25 years for the crime, one that had both sexist and racist motivation.

Blast and Franco, members of the Almighty Latin King and Queen Nation gang, targeted the young girl less than 24 hours after she had run away from home. Williams was known to sometimes run away from her home in Harlem, and her mother hadn’t initially suspected foul play when she didn’t show back up, assuming she was staying with extended family as she had done in the past.

The same day as Williams had run away, she was kidnapped by Blast and Franco, and taken to an apartment in Hunts Point where she was held captive. The men had likely recognized her from previous visits to the neighborhood she had made while looking for a place to stay with her older sister, and some accounts state that she had been targeted based on her race.

Blast repeatedly raped Williams, and he and Franco tortured the young girl further before stabbing her in an attempt to kill her. Realizing she was still alive after having been slashed by Blast, Franco then stomped on the child’s neck until it was broken.

Following her death, Blast and Franco packed the girl’s small body into a box and dumped it near the Sheridan Expressway. Finally, they doused the box in gasoline, and set it ablaze. A passenger on a nearby train saw the flames and called 911.

After extinguishing the fire, attending detective Sergeant Michael Garvey noted that there had been no means of identifying Williams as she was completely naked, and had been badly mutilated. “All I saw was that her hair had been worn in corn rows,” he said at the time of the investigation.

Despite pleading innocence in court and to media in later interview, Blast had reportedly “bragged” about committing the crime to friends, some of whom would later testify against him on this basis. Blast and Franco both received 25-to-life for the murder of Williams, but the rape charge was not pursued.

Blast reportedly suggested he avoided the rape conviction because of his gender identity and homosexual orientation.

“They had to switch their story in the trial because how do you tell the jury that he had on a dress and then he was raping a girl?” He is quoted as saying, claiming he had never had sexual intercourse with a female. But the determining factor was likely that DNA was unable to be recovered from Williams due to the state of her remains, which were so destroyed that she was only able to be identified through dental records.

During the trial, Blast and Franco were reportedly blasé about the crime they’d committed, and had even been laughing at times during the hearings. A statement given by Yvonne Hill, Williams’ mother, at the time of their sentencing condemned the two for their behavior throughout the process.

“Ever since the trial was going on, all I see is Luis Morales grinning and Carlos Franco, too,” Hill said, referring to Blast by the name he had used at the time. “You ain’t smiling today. I hope you both rot in hell.”

Following his detention, Blast became a noted advocate for incarcerated trans people’s rights, successfully demanding the state of New York provide him with feminizing hormones in 1999, and suing the state in 2003 after having been refused sex reassignment surgery.

Blast repeatedly became a media sensation for his sexual exploits while in custody, beginning a romantic relationship with Heriberto “Eddie” Seda, a convicted serial killer who had sought to murder one person of each zodiac sign as an homage to San Fransisco’s infamous Zodiac Killer. Blast and Seda’s relationship was dotingly covered by the New Yorker in 2004, who even commissioned a portrait photograph of the couple.

“I met my friend, lover and infamous husband… the NYC Zodiac Serial Killer,” Blast told the New York Daily News. “My sweet serial killer is a lady’s man now. Only if I was a real woman I could bring about little future serial killers to terrorize NYC like my husband did. How [New Yorkers] would of loathed the Zodiac Children.”

Blast and Seda were ultimately separated from each other by the Department of Corrections.

In 2015, Jezebel published an article condemning Blast’s treatment while in prison, noting that he had been in involuntary protective custody (IPO), or solitary confinement, for almost two decades. The article followed a petition launched by the Sylvia Rivera Law Project (SLRP), a trans activist legal organization, which sought to pressure New York State into releasing Blast from IPO. The SLRP had, at one point, used Orange is the New Black actor Laverne Cox to speak on Blast’s behalf.

The Jezebel article slammed “trans-exclusionary” feminist Cathy Brennan for calling Blast a “man who now identifies as a woman,” and glossed over the details of Blast’s crime in favor of giving him a platform to claim innocence.

Blast was similarly profiled in a 2017 VICE article in which he called for trans-identified males to be housed with women.

According to the New York Department of Corrections and Community Supervision (DOCCS), Blast was paroled in 2018.

One year after being paroled, Blast appeared as a member of the Sylvia Rivera Law Project’s prisoner advisory committee, and was interviewed in a video with three other trans-identified males. The video was posted to the SRLP’s Facebook.

“I came from being in a jail cell to learning about SRLP and its mission, who Sylvia Rivera, as a person, actually was, and … about Marsha P. Johnson, and I was definitely hooked into this movement,” Blast said.

“We all have a voice. And we live in a time, today, where that voice is finally being heard. We haven’t reached that milestone yet. We are all screaming together, and now they are finally listening,” Blast says, then beginning to promote the SRLP as a center which can help transgender people change their names and legal identity, “Whenever I find a transgender person, I ask them: Do you know about the Sylvia Rivera Law Project?”

The most recent update on Blast’s file with DOCCS shows that he was discharged from parole supervision on July 30, 2022, quietly marking the completion of his sentence for the 1996 murder of Ebony Nicole Williams.