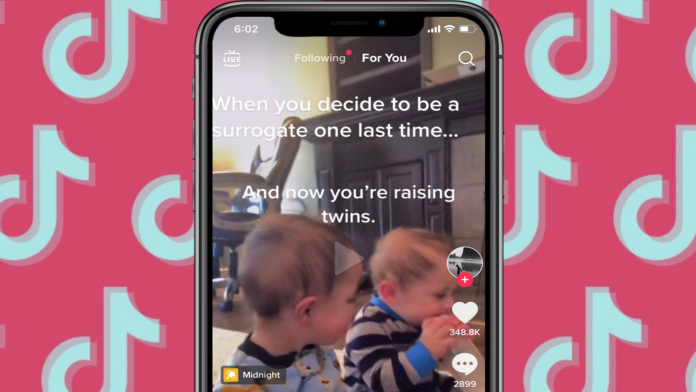 A US-based woman who entered into a surrogacy arrangement and gave birth to twins last year is now raising the children with her husband after the intended parents cut off contact.

In a TikTok that went viral, wracking up over 4 million views in a matter of days and sparking outrage, the mother, who goes by Amanda, revealed that she had been left to raise twins after the couple she had been a surrogate for never came to retrieve the children she had given birth to, and cut off contact with her.

Amanda had previously been a surrogate and decided to repeat the process. She registered with a surrogacy company that connected her with a couple who lived overseas. She gave birth to twins Hannah and James in February 2021, but the intended parents never arrived to pick them up.

“They weren’t willing to quarantine for two weeks before entering the US,” Amanda explained.

Yet when COVID-19 restrictions were lifted in November last year, the couple still made no plans to come and take the children.

“I was okay taking care of them for a little while,” she wrote in the comments of her TikTok account. “But days turned into weeks and weeks into months… with no travel progress.”

Initially, the couple was sending money to Amanda and her husband to provide for the babies’ care. But after Amanda asked them not to send money if they had no intentions of taking the children, the intended parents ceased all contact.

In the viral TikTok video, Amanda explained that over 50 days had passed since they heard from the couple, and 14 months since she had given birth. Amanda, whose TikTok handle is @mom_11203, has since locked her account.

“Not only did they not pick up the twins – they never established their parental rights,” she explained.

Currently, both Amanda and her husband are listed as the legal parents on the twins’ birth certificate. The surrogacy contract had detailed that a second birth certificate would be drawn up when the parents arrived to take the infants home.

Amanda and her husband have hired a lawyer and have decided to raise the twins. “We ARE working with a lawyer. Yes, there was a legal contract in place,” Amanda said in a comment. “Our contract states that I am legally bound to give up my rights. But they’re also legally bound to come get their babies.”

She is determined to keep the twins even if the intended parents establish contact again and attempt to pick them up. “I will not give them up without a fight,” she said.

Jennifer Lahl, founder and president of The Center for Bioethics and Culture Network, has combined her experience as a pediatric critical care nurse with her advocacy against the surrogacy industry. She has also produced several documentary films exposing the medical harms involved in the surrogacy process and highlights the personal stories of women who have been harmed.

Speaking with Reduxx, Lahl explained that though she had never spoken with women who had been abandoned by the intended parents, she has often seen cases where the intended parents demanded that the surrogate mother terminate a pregnancy or reduce the number of fetuses she is carrying.

“Never has the surrogate done this, but what they struggle with after giving birth is wondering whatever became of the babies. Did the intended parents keep the babies, give them up for adoption, or keep one but not all. This is more common than intended parents never coming to claim their babies,” Lahl said.

“In some U.S. states, the surrogate mother’s name is on the birth certificate when the baby is born and the intended parents have to go through a legal adoption. But in states like California, New York, and Washington, the surrogate waives her maternal rights at the signing of the contract, before she is even pregnant, and in this case, she would have to go through a formal adoption to legally become the mother of the child.”

Lahl, who has over a decade of experience working with women who were involved in surrogacy contracts and has spoken at the United Nations on the topic, went on to describe why she believes the industry is inherently exploitative.

“The industry, what I call Big Fertility, preys on women’s financial need and sense of altruism to help others have a family. They ignore the risks to women’s health, they groom women ⁠— you aren’t pregnant, you are on a ‘journey’ ⁠— to comply and obey. When things go wrong, they are last in line to help these women,” Lahl says.

“Bottom line, they are selling a product: a healthy baby. Their customer is the wealthy intended parent.”

Reduxx is a newly-launched independent source of pro-woman, pro-child safeguarding news and commentary. We’re 100% reader-funded! Support our mission of bringing you uncensored, unfiltered stories by joining our Patreon. Or, consider making a one-time donation.