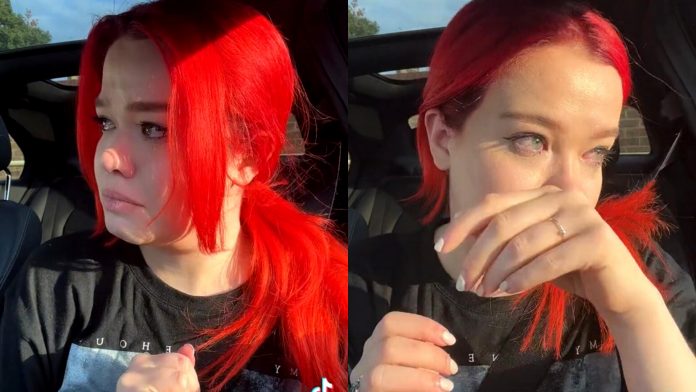 A young woman is going viral for her TikTok in which she details having been violated in a Primark gender neutral changing room, renewing discussions about the dangers that come with a lack of single-sex spaces.

On September 24, a TikTok began to circulate across social media of a young woman tearfully recounting a distressing experience in a Primark mixed-sex changing room.

Primark, a popular fast fashion retailer, introduced their first “gender neutral” changing rooms at two UK branches in 2019, and slowly expanded their availability to all stores over the years. But even prior to the introduction of the official policy, staff had reportedly been encouraged to let customers choose whatever changing room they wanted to use.

In the video, TikToker Charlotte M. Kirby explains that she had been in a Primark in Cambridge, UK using the fitting rooms when she was deliberately intruded upon by two men.

“I was trying on some clothes, and it was a unisex changing room — which, I am for because it makes every feel really included… But, twice, two men walked in on me. Opened the curtain and walked in on me … It was two different men but they were with the same group.”

Kirby says she fortunately been dressed on both occasions, but suggests that the men had clearly been organized in an effort to catch her in a more vulnerable state.

Kirby filmed her TikTok in her car, which she says a Primark staff member had to walk her to due to how shaken up she had been by the incident. She also explained that the store was currently investigating who the men were via CCTV footage. Kirby ends by recommending her viewers to avoid using the changing rooms alone, and states she won’t be using them ever again.

After it was posted to Twitter, Kirby’s video went viral — wracking almost one million views on one account alone. On TikTok, the video has since garnered over 140,000 ‘likes’ and thousands of concerned comments from viewers.

Kirby has since made a follow-up video in which she declines to address the issue of whether there should be single-sex facilities in response to a comment, but notes that a similar incident had happened before and that the men involved had been arrested. Kirby also says the men who had intruded upon her this time are still at large.

Following the viral attention, women on Twitter started a #BoycottPrimark campaign, with the hashtag briefly trending in the last 24 hours.

“WTAF? I never use changing rooms, so I was totally unaware that @Primark had mixed ones. WHY in this day and age where sex crimes are at an all time high, would a huge company make such a decision in an area where women get almost naked? #boycottprimark,” Twitter user Pams Daughter wrote.

“#BoycottPrimark I’ve worked with children for over ten years; I happen to know that young girls (and women too) hide out in women’s changing rooms (or toilets) if they need to escape someone, who might be a stranger or stalker. Create an additional room, not mixed ones,” author W.M Aslam tweeted.

Primark’s official Twitter account appears to have attempted to overlook the mass campaign, ignoring the swelling backlash following Kirby’s viral TikTok. But beneath their latest casual tweets, women made their opinions known, and some even posted their own experiences being violated in Primark’s gender neutral fitting rooms.

One Twitter user recounted that Primark staff had offered her £10 in compensation after she had reported several men barging in on her while she was trying on clothes.

This is not the first time Primark’s “gender neutral” changing room policies have led to gross violations of the safety of their customers, females in particular.

Multiple men have been arrested since 2019 in relation to ‘upskirting‘ photographs being taken of girls and women in Primark changing rooms, and the retailer has a long history of serious sexual violence occurring on their premises.

Earlier this year, a 13-year-old boy was sexually assaulted in a Southampton Primark by an individual described as “wearing red fishnet tights, a stripy top and a grey wig.”

Gender neutral facilities are just one battleground in the wider gender ideology debate, with many feminists noting that unisex facilities put women and girls at increased risk of sexual violence.

According to a 2018 Freedom of Information request conducted by the Sunday Times, just under 90% of police complaints regarding changing room sexual assaults, voyeurism and harassment in UK swimming pool and sports-centre changing rooms occurred in gender neutral or mixed-sex facilities.

At the time, Member of Parliament David Davies called mixed-sex facilities a “magnet” for sex offenders, and used the data to slam gender self-identification policy as “wrong and dangerous.”