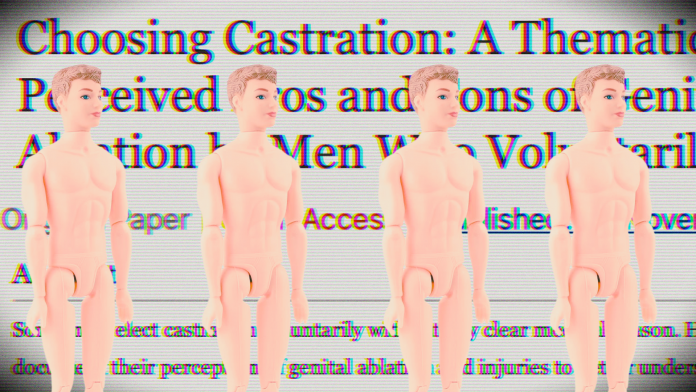 Academics affiliated with a top transgender health association have released a paper in collaboration with participants of a castration fetish forum that hosts fantasy child sexual abuse material.

On November 3, the Archives of Sexual Behavior published a paper on “choosing castration” co-written by two academics who work closely with the World Professional Association for Transgender Health (WPATH).

Dr. Thomas W. Johnson, Professor Emeritus at the University of California-Chico, and Dr. Richard J. Wassersug, of the University of British Columbia, co-authored the paper which examines the reasons men seek out voluntary castration, as well as the “the pros of genital ablation.”

Both Johnson and Wassersug have presented their papers at conferences hosted by WPATH in the past. Most recently, Johnson spoke at the 27th Scientific Symposium held in Montreal in September on the existence of a “eunuch gender identity.”

The paper, titled “Choosing Castration: A Thematic Analysis of the Perceived Pros and Cons of Genital Injuries and Ablation by Men Who Voluntarily Sought Castration,” analyzes the results of surveys conducted with approximately one thousand members of the Eunuch Archive between October 2016 and June 2017.

The Eunuch Archive is a long-standing forum which hosts nearly 10,000 fictional pornography stories of an extreme sadomasochistic nature. As previously reported by Reduxx, many of these stories feature a theme of the rape, castration, torture, and killing of children — specifically little boys.

Despite the forum’s highly disturbing nature, the Institutional Review Board of California State University Chico approved the research with the aid of a Eunuch Archive Steering Committee.

In the paper, the authors provide ample praise for WPATH’s most recent version of their Standards of Care and its inclusion of treatment options for those who identify with a eunuch gender.

“The new WPATH SoC version 8… includes recommendations for health professionals to offer medical and surgical intervention when there is a high risk that withholding treatment would lead to harm such as through self-injury, surgery by unqualified person, or unsupervised hormonal use,” the paper includes.

In addition to having provided consultation to WPATH, Johnson and Wassersug have both been active members of the Eunuch Archive for decades and serve as the top administrators for the site. Johnson utilizes the moniker “Jesus,” while Wassersug is known as “EunuchUnique.”

A third academic similarly involved in WPATH events, Dr. Krister Willette, was a formative member who first posted to the original Usenet group in 1997 in order to request his own surgical castration.

Other prominent members of the Archive are currently in prison on child sexual abuse-related charges.

Jack Wayne Rogers, a former site member, was arrested in 2015 for performing a “makeshift gender reassignment surgery” on a man who identified as a woman. Upon an investigation by authorities, Rogers, a former church minister and Boy Scout leader, was found in possession of both child sexual abuse materials and a pornography collection that incorporated photographs of severed genitals.

According to court records, evidence against Rogers also included Internet “chat logs” in which Rogers discussed methods of torturing and mutilating children and bragged that he once abducted, raped, tortured, and murdered a boy.

Additionally, a founding member of the Eunuch Archive forum who drafted its initial FAQ document was convicted of child pornography charges and sexual conduct against a child in the first degree in 2005. Thomas Pidel, who operated a youth hostel, was sentenced to 15 years in prison and is classified as a Level 3 sex offender.

Surveys conducted with members of the Eunuch Archive have been used to promote the concept of a eunuch gender identity, with the aid of the World Professional Association for Transgender Health (WPATH), beginning as early as 2009, when Johnson first presented his research at a conference in Oslo held by WPATH.

Johnson was again invited by WPATH to speak at a 2011 conference in Atlanta, Georgia, along with Wassersug and Willette. It was during this conference that the decision was made to de-classify Gender Identity Disorder as a psychological condition. In its place, Gender Dysphoria would ultimately become the recommended terminology, thereby loosening medical restrictions around minors accessing hormones, puberty blocking-drugs, and surgeries.

In addition to having Wassersug, Johnson, and Willette involved in an advisory capacity, WPATH directly referenced the Eunuch Archive in its draft standards of care released in December.

Johnson claims to have been influential in editing the fifth edition of the Diagnostic and Statistic Manual for Mental Disorders (DSM), which is published by the American Psychiatric Association (APA). The DSM is regarded as the authoritative guide to the diagnosis of mental disorders in the United States, but is also referenced internationally.

“The draft for the next edition of the Diagnostic and Statistical Manual of Mental Disorders (the DSM-5) suggests ‘Gender Incongruence,’ which I much prefer,” Johnson wrote on the Eunuch Archive forum in 2010. “The body and mind are out of sync, with no mental illness implied!”

Stella O’Malley, psychotherapist and executive director of Genspect, has been critical of WPATH guidelines and has voiced concerns about the association between WPATH and the Eunuch Archive.

“WPATH have moved from being a professional organization that tried to provide appropriate clinical treatment to help trans people to being a trans activist lobby group who believe that healthcare should be driven by consumerism rather than by clinical considerations,” O’Malley told Reduxx.

“Johnson and Wassersug clearly have an inappropriate and unhealthy desire to normalize fetishes and this view has evidently infiltrated WPATH [Standards of Care] SOC 8. At Genspect, we believe in a free society but we also believe that clinical care should be driven by clinical considerations,” O’Malley explained.

“Normalizing fetishes is driven by a political and cultural agenda and disregards the harm that fetishistic disorder can cause. While WPATH is free to lobby to normalize the fetish community, it is not appropriate for them to pretend that they are driven by clinical care considerations.”

O’Malley went on to state that, in her view, WPATH had “entirely discredited itself and can no longer be taken seriously,” citing its promotion of “nullification” surgeries, which have now been commonly rebranded as “non-binary genital” surgeries. In these surgeries, the entire genital area is modified in an effort to give it a smooth, doll-like appearance. Often, only a small hole for urination remains.

“The arrival of ‘nullification’ surgery shows us that it is dangerous to live in a world where the consumer can pay for whatever medical interventions they want as some people are mentally ill and clinicians have studied for many years to ensure that they first, do no harm,” O’Malley said.

O’Malley is a co-signer of an open declaration which aims to “sound the alarm” on WPATH’s “latest, deeply flawed Standards of Care,” and urged those who are concerned about their medical recommendations to take action by signing the letter.