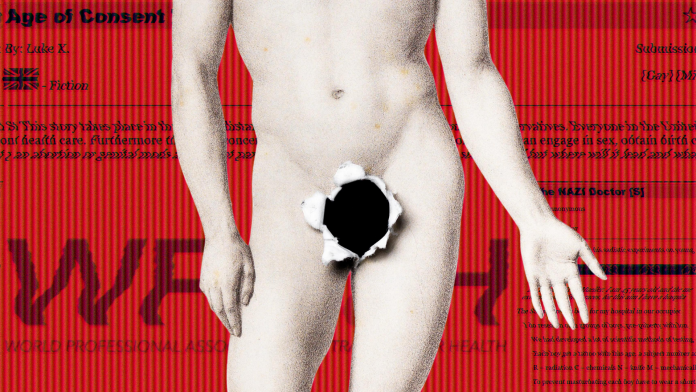 The World Professional Association for Transgender Health (WPATH) has released a finalized version of their updated Standards of Care guidelines (SOC8). Among the recommendations include reducing the age at which children can receive “puberty-blocking” drugs and cross-sex hormones to 9 years old. Age restrictions on surgical interventions have also been relaxed.

In a change from previous protocols, no specific minimum age is recommended as a cut-off point.

WPATH had previously issued specific guidance on age. Hormone treatments were recommended from 14 years old and up, cosmetic mastectomies at 15+, breast augmentation and “facial feminization surgeries” at 16+, and 17+ for surgeries of the reproductive system, like hysterectomies. They had also recommended an age of 18+ for phalloplasties, the surgical creation of a non-functioning penis.

But on September 15th, WPATH abruptly issued a correction removing those specific age guidelines, despite growing criticism and concern over the medicalization of gender non-conforming children.

The new criteria are raising concerns on subjectivity, as they appear to open the door for clinicians to halt a child’s puberty, place them on cross-sex hormones, or offer surgeries dependent once they have reached the period of development referred to as Tanner Stage 2, which occurs between 9-11 years of age.

In a section of the SOC8 guidelines titled “Summary Criteria for Adolescents,” WPATH states that “puberty-blocking agents” may be given to children who have begun Tanner Stage 2, which is reiterated under recommendations for “hormonal treatments.” With regards to surgeries, WPATH suggests a minimum of 12 months of “hormone therapy” before an individual can obtain “gender-affirming procedures, including breast augmentation, orchiectomy, vaginoplasty, hysterectomy, phalloplasty, metoidioplasty, and facial surgery.”

The decision to limit child medical “transition” to Tanner Stage 2 seems to have been at the behest of current WPATH president, Marci Bowers. Earlier this year, Bowers, who is a trans-identified male, stated in a panel discussion for Duke University that children whose puberty has been halted prior to Tanner Stage 2 will never have adult sexual function or experience orgasm.

“An observation that I had,” said Bowers, “every single child who was, or adolescent, who was truly blocked at Tanner stage 2,” which is the beginning of physical development, when hormones begin their work of advancing a child to adulthood, “has never experienced orgasm. I mean, it’s really about zero.”

According to the September 15 correction, the following statement was removed from the medical guidelines: “Importantly, for each gender-affirming intervention being considered, youth must communicate consent/assent and be able to demonstrate an understanding and appreciation of potential benefits and risks specific to the intervention.”

On the day of the document’s release, James Esses, a barrister and co-founder of Thoughtful Therapists, labelled the SOC8 guidelines as “one of the most shocking indictments of ideology infecting medicine that I have ever come across.”

Esses came to widespread notoriety in 2021 after being expelled from a Master’s program he had been working through with the intention of becoming a therapist. The expulsion came shortly after Esses launched a petition to the British government requesting evidence-based therapy for youth presenting with gender dysphoria be protected from criminalization under “conversion therapy” bans.

“Safeguarding of children is no more. Age limits for puberty blockers, hormones or surgery are removed, as long as a child has reached ‘Tanner Stage 2’ (which can be as young as 9). There’s no requirement for a child to have taken hormones prior to surgery ‘if not desired,'” wrote Esses on Twitter.

Speaking with Reduxx, Esses expressed horror and shock at the new SOC8 measures.

“The SOC also alienates parents by disregarding their concerns about medicalizing their children should their involvement be deemed ‘unnecessary’. The promotion of the dangerous practices of ‘chest binding’ and ‘genital tucking’ are a further cause for concern,” Esses added.

“Mental health has also been kicked to the curb with a strict statement that therapy should never be a pre-requisite for medication or surgery. Finally, the SOC promotes irreversible and experimental medication and surgery, regardless of the fact that there are ‘few outcome studies that follow youth into adulthood’  and ‘no clinical studies that have reported on profiles of adolescences who regret their initial decision.'”

Esses also explained that WPATH appears to be using euphemistic language to “obfuscate” the serious nature of these medical interventions. “The guidelines are filled with ideological language. Irreversible medication and surgery is ‘gender-affirming health care.’ Terms like ‘cisgender’ and the factually inaccurate ‘sex assigned at birth’ are used.”

Largely ignored is the fact the new criteria reflect the stated desires of a castration fetish forum, the members of which were found have been working intimately with WPATH in a Reduxx investigation published earlier this year. The site also hosts child sexual abuse fantasies that involved halting children’s development for pedophilic interests.

For decades, the group has lobbied the American Psychiatric Association for changes to diagnostic terminology. Surveys conducted within the forum on castration fetishism have been published by WPATH in an academic journal and presented at official conferences.

The SOC8 guidelines were created in partnership with academics who have been leading figures in the castration fetish forum for over twenty years. In particular, members of the forum contributed views towards a new section in the guidelines on the concept of eunuchs as a gender identity.

The Eunuch Archive, the forum which is directly named as a resource in WPATH’s newly-released SOC8, is home to nearly 10,000 fictional pornography stories of an extreme sadomasochistic nature.

As previously reported by Reduxx, many of these stories feature a theme of the rape, castration, torture, and killing of children.

“Like other gender diverse individuals, eunuch individuals may be aware of their identity in childhood or adolescence,” states the final version of the SOC8. “Due to the lack of research into the treatment of children who may identify as eunuchs, we refrain from making specific suggestions.”

In May, Reduxx learned that three of the forum’s top members were academics who had been collaborating with WPATH on the most recent SOC8 guidelines. One of the site’s top administrators is Dr. Thomas W. Johnson, a Professor Emeritus at California State University in Chico. Johnson has been a leading member of the Eunuch Archive since 2001.

Johnson has also published research based on surveys he has personally conducted with other members of the Archive. His long-term academic interests have included advocating for the expansion of the “transgender umbrella” to include men with sadomasochistic and even pedophilic castration fantasies. Johnson is credited as a committee member who helped shaped the new SOC8 on the WPATH website.

Commenting on WPATH’s apparent collaboration with members of the archive, James Esses told Reduxx that it was “extremely concerning” that ‘eunuch’ was being introduced as a gender identity.

“Promoting the ‘castration’ of boys, particularly given many seek castration as a form of sexual fetish, and trying to bring it within the concept of gender identity in order to push irreversible surgery is abhorrent. The strong links with the Eunuch Archive, and the fact that the sole research regarding this topic appears to have come from this forum, is also of deep concern,” Esses said.

The class of drugs euphemistically referred to “puberty blockers” are the same medications given to chemically castrate recidivist sex offenders, and sex abusers of children in particular. This has caused some medical professionals to directly state that the use of these drugs in children is the “chemical castration” of minors.