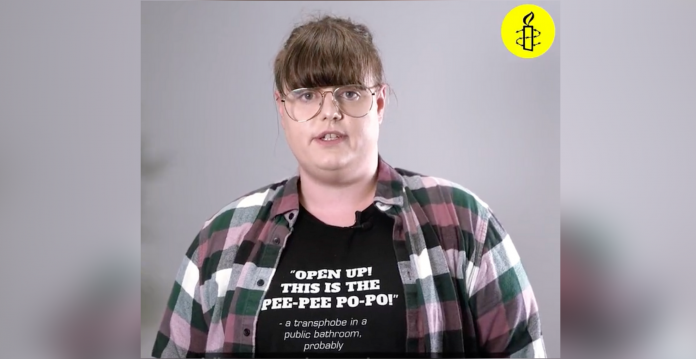 Amnesty Norge, the Norwegian chapter of Amnesty international, has released a collaboration video promoting trans rights with an activist who launched a police investigation against a feminist for expressing her opinion on gender ideology.

“Christine Marie” Jentoft reported women’s rights advocate Christina Ellingsen to the police over comments she made on Twitter stating that men cannot be lesbians.

The video, which was posted to Amnesty Norway’s Twitter on June 16, shows Jentoft wearing a shirt intended to mock women who are uncomfortable with men using female bathrooms. Amnesty presents Jentoft with comments and opinions portrayed as uneducated or bigoted he then responds to.

During the video, Jentoft defends males using women’s restrooms, and claims that there are more than two sexes.

When asked about the impact “trans rights” have on women’s rights, Jentoft denies there is any conflict, and addresses the concern by saying “rights are not like a pizza where some get more and others get less.” Jentoft also claims trans activism does not want to erase the words ‘man’ and ‘woman’ — two responses which could be perceived as ironic considering Jentoft is attempting to have a feminist imprisoned for her perspective on women’s sex-based rights.

Jentoft, a male who identifies as a “lesbian,” currently serves as an advisor on gender diversity for the Norwegian Organization for Sexual and Gender Diversity (FRI – foreningen for kjønns- og seksualitetsmangfold).

FRI, which originally focused on advancing the rights of the gay and lesbian community, shifted its campaigning towards destigmatizing fetishes as it began to take up the cause of transsexual lobbying.

Last year, Ellingsen, a representative of feminist organization Women’s Declaration International (WDI), questioned why FRI promoted the belief that men could be lesbians. She directed some of her tweets at Jentoft due to his involvement with the organization.

“Why [does] FRI teach young people that males can be lesbians? Isn’t that conversion therapy?” Ellingsen tweeted in October 2021.

A second tweet that has been cited as evidence of hate speech reads, “Jentoft, who is male and an advisor in FRI, presents himself as a lesbian – that’s how bonkers the organization which supposedly works to protect young lesbians’ interests is. How does it help young lesbians when males claim to be lesbian, too?”

In January, Ellingsen appeared on a Norwegian television debate with Jentoft, the topic being biological sex, language, and trans health.

“Jentoft claimed to be a woman and a mother. To which I replied: you are a man. You can’t be a mother. It is discrimination against women that we are to understand you as a mother,” Ellingsen says, “My statement is true on every level, of course, but is especially true because changing legal sex in Norway explicitly does not include a change of parental status.”

But Ellingsen explains that when she debated Jentoft on television, the activist had already reported her to police. He would later add the comments she made during the debate to the police report, which she was still unaware of at the time.

While police are still investigating, if she is found guilty, Ellingsen could face a prison sentence of up to three years for her comments.

Speaking with Reduxx, Ellingsen expresses a lack of surprise at Amnesty Norway’s involvement with Jentoft, the organization having previously defended him against her statements before.

“Amnesty Norway used their platform to claim that me calling Jentoft ‘man’ on TV was harassment,” Ellingsen says, “Two of my retweets of Amnesty Norway’s misrepresentation of ‘harassment’ was later included in the report to the police.”

Ellingsen points out that Amnesty, despite being a multi-national human rights charity, has long since abandoned the recognition women face unique, sex-based oppression.

“Amnesty does not recognize violations against women. On the topic of sex-based exploitation against women, they have publicly sided with those who exploit women, both on the topic of prostitution and trafficking, and on the topic of women’s right to count as a sex-class. Their Ireland branch even claims in a letter that there are no such thing as a sexed body.”

Amnesty has come under fire from women’s rights in recent years since shifting its stances on many key feminist issues. It currently lists female genital mutilation as being a “gender-based” discrimination, and announced its support for a blanket decriminalization of “sex work” in 2016.

“Women make up the majority of those who donate to charities. Do women realize what they support when they [donate to] Amnesty?” Ellingsen asks, “I think that by backing the most exploitative industries against women, and by supporting the erasure of women as a sex-class, Amnesty might be making a mistake.”