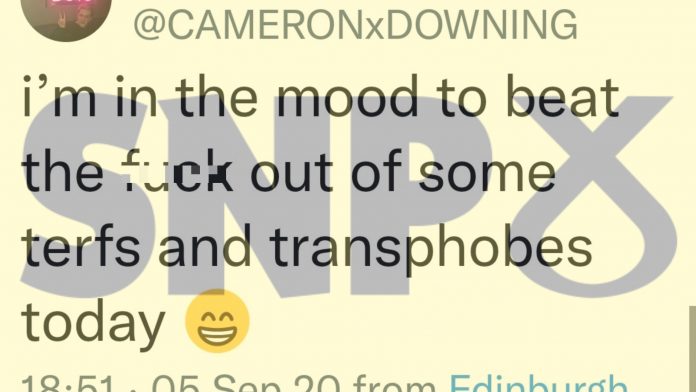 The London Branch of the Scottish National Party (SNP) has hired a radical trans activist as an Equalities Officer, prompting backlash and concern from feminists who have uncovered violent statements he has made against women critical of gender ideology.

Cameron Downing, 23, was quietly elected as an Equalities Officer for the SNP’s London Branch at the party’s most recent Annual General Meeting. Downing also works as the Media and Communications Officer for the party’s official LGBTQ group — Out for Independence, where he previously served as the gender identity and expression officer.

But disturbing tweets have emerged of Downing calling for physical violence against “TERFs,” an acronym which stands for “trans exclusionary radical feminist.” TERF is considered by many to be a derogatory term, and has often been used to justify violence against women who oppose gender ideology.

“The SNP seem to actively want mindless thugs in their ranks – as long as it is only women they want to hurt,” For Women Scotland tweeted in response to the news.

“I am a party member. I will not turn up to campaign or even vote in any election until the party seriously tackles its problem with misogyny. I will not vote for a party that tolerates speech encouraging violence against women from its officers,” wrote Twitter user @rampitchfork.

Even within the SNP, some who have spoken up against gender self-identification laws have found themselves mistreated by the party.

SNP Member of Parliament Joanna Cherry has been a vocal proponent of women’s sex-based rights and has expressed disapproval of many elements of gender ideology. Cherry has said that as a result of her beliefs, she was “cancelled” by her party, and that she has been subjected to harassment and abuse campaigns on social media for condemning self-identification laws.

At the LGB Alliance’s first annual conference in 2021, Cherry spoke about the death threats she received for speaking out for women’s sex based rights. She also described having received a corrective rape threat which, after a police investigation, she learned originated from a fellow SNP member.

“Essentially threatening me with corrective rape, and it turned out that these came from somebody who was actually a member of the SNP. This man was prosecuted successfully and I find it really quite horrifying and troubling that nobody in my political party has felt able to publicly condemn the rape threats that were made against me,” Cherry stated in her speech at the conference.

Cherry said that she has received private messages of support from fellow party members, but that they have expressed fear about going public with their shared concerns.

Downing is not the first person the SNP has employed who was later found to have expressed contempt for those who advocate for women’s sex-based rights.

Earlier this year, the SNP came under fire after having hiring a trans-identified male, Alexandria Adamson, as their Learning Disabilities Officer.

Shortly after his appointment, video began circulating of Adamson screaming repeatedly at a woman during a demonstration in Edinburgh in September of 2021.

Shortly after his hiring was announced, internet sleuths began searching through Adamson’s Twitter account and found a number of disturbing posts. Adamson referred to women’s rights activists as “evil TERFs,” and had called for current-Prime Minister Liz Truss a “demon” and a “bitch” who had to be “put to death.”

Earlier this month, SNP Member of Parliament John Nicolson similarly drew ire for claiming that anyone could “declare” themselves a lesbian.

Nicolson made the homophobic remark during a tribunal in which the LGB Alliance is being forced to defend its charity status in light of a challenge from trans activist charity Mermaids.

The Scottish National Party officially supports a bill which would outline changes to the Gender Recognition Act in Scotland, including removing the requirement for an individual to have a diagnosis of gender dysphoria prior to being able to change the sex on their birth certificate. The bill would also allow minors as young as 16 to make changes to their legal documents.