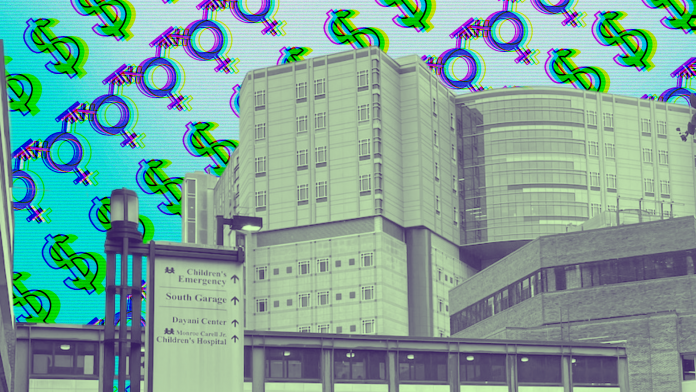 A gender clinic in Nashville, Tennessee is facing backlash after videos were posted to social media showing their top administrators describing gender surgeries as “money makers” and asserting that doctors should be unable to object to carrying out these surgeries.

The videos were first exposed by Matt Walsh, a conservative commentator at the Daily Wire and presenter of the recent hit documentary What is a Woman. Walsh has made multiple Twitter threads on the scandal this week, which has since caused the issue to go viral.

Vanderbilt University’s Health Center opened its Clinic for Transgender Health in 2018, at which point it began offering a variety of “transgender” surgeries. Its gender offerings were extended into a pediatric gender clinic within its children’s hospital.

The same year as it opened, the Center’s Medical Director, Dr. Shane Taylor, gave a lecture in which she described the explicit financial benefits behind opening the gender clinic.

During the lecture, Dr. Taylor noted that elective double mastectomies can “bring in $40,000 dollars a patient” and that the surgeries “actually [make] money for the hospital.”

She went on to explain the profits the hospital could rake-in through offering vaginoplasties and phalloplasties, both of which are largely experimental, expressing that the Hospital could earn even more than initial financial analysis suggested once taking into consideration hospital stays, follow up appointments, and medications.

The procedure Dr. Taylor is referring to is known as a phalloplasty. The complex surgery involves flaying a large graft of skin from another part of the female patient’s body — usually from the arm or thigh — and constructing a penis-shaped tube of flesh which is then surgically sewn onto the woman’s genital area to create the aesthetic of a penis.

The surgery usually requires several phases to allow the constructed ‘penis’ to perform basic functions, such as urination. It is known for having an extremely high complication rate, and has been decried as butchery even by some female-to-male transgender individuals advocating against the procedure.

On Twitter, Walsh also exposed another video from Vanderbilt’s Dr. Ellen Clayton, a pediatric specialist at the hospital, lecturing that employees would face consequences if they objected to participating in transgender surgeries.

“If you are going to assert conscientious objection… you have to realize that is problematic. You are doing something to another person, and you are not paying the cost for your belief. I think that is a real issue,” Dr. Clayton said, continuing: “It should not be without consequences. If you don’t want to do this kind of work, don’t work at Vanderbilt.”

“The ‘buddies’ are trans activists from the community who attend appointments with trans patients, monitoring the doctors to guard against ‘unsafe”‘ behavior such as misgendering,” Walsh commented, accusing Vanderbilt of operating a “big brother” program to ensure hospital employees were serving in lock-step compliance with gender ideology.

Disturbingly, the investigation also found that Vanderbilt was providing “puberty blockers” to children, and cross-sex hormones to youth as young as 14.

“Vanderbilt, like so many other medical institutions, has sacrificed both science and ethics on the altar of gender ideology,” Walsh stated on his podcast while discussing his findings.

Walsh’s Twitter threads rapidly went viral, wracking up over 78,000 likes by the time of this article’s writing. In apparent response to the widespread backlash the investigation caused, the Hospital shut down the gender clinic’s website.

Later, the Hospital released a statement regarding the investigation where the claimed the video “misrepresent facts about the care the Medical Center provides to transgender patients.” Vanderbilt writes that they were motivated to establish the clinic in order to serve transgender patients who “are a high-risk population for mental and physical health issues and have been consistently underserved by the U.S. health system.”

They excused giving “puberty blockers” and cross-sex hormones to minors by explaining they did so with parental consent.

Since Walsh’s investigation has gone viral, the Governor of Tennessee, Bill Lee, has called for a state investigation into the Medical Center.

Vanderbilt is not the first Hospital to come under fire this year for providing high-risk ‘gender affirming’ procedures and drugs to youth.

Another video from the Hospital that sparked massive backlash featured Dr. Jeremi Carswell, the Director of the GeMS clinic, stating that children can “know that they are transgender from the moment they have any ability to express themselves,” and “parents tell us… they knew from the minute they were born.”

While Boston Children’s Hospital denied the allegations that they were giving risky gender treatments to youth, Reduxx discovered a lecture given by Dr. Norman Spack contradicted their claims.

Dr. Spack is the co-founder of the pediatric gender clinic at BCH, and, in a TED Talk lecture he gave in 2013, Dr. Spack spoke of halting children’s puberty beginning as early as 10 years old.

Dr. Spack went on to advocate for the necessity of prescribing puberty blockers and estrogen to young boys so that they can grow up to be “beautiful,” highlighting two instances in which he had done so. Dr. Spack tells of meeting “Jackie,” a 12-year-old male child from Britain, and placing him on estrogen by 13 years old.

In 2015, Dr. Spack wrote an op-ed in the New York Times asserting that “genetic boys could have surgery at 17, especially if they are going to college, since the months of necessary post-operative care are best done at home. If genetic girls who identify as male have very large breasts, mastectomies could even be done at 14.”

He has also separately asserted that children as young as 2 years of age can understand their gender identity.