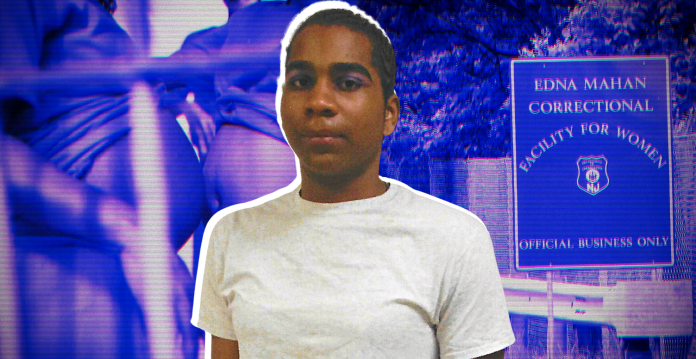 The trans-identified male convict who impregnated two women at the Edna Mahan Correctional Facility for Women had been trying to have sex with the female inmates from the moment he was transferred in, according to sources at the prison.

Demetrius ‘Demi’ Minor, 27, came to widespread notoriety after it was revealed that he had been responsible for two pregnancies in the women’s estate after being transferred in while serving a 30 year sentence for the murder of his foster father. Earlier this month, Minor was moved out of Edna Mahan to the vulnerable housing unit at the Garden State Youth Correctional Facility, a prison for young adults ages 18 to 30, a New Jersey Department of Corrections spokesman Dan Sperrazza told NJ.com.

Since moving into the youth facility, Minor has become more active on social media, and in particular on Twitter, where he has been posting photos and videos and referring to himself as an “incarcerated juvenile justice advocate.”

On July 15, Minor published a blog post to his website Justice 4 Demi claiming that he had been placed on suicide watch at the youth detention center “due to the fact that I had hung myself.” Minor implied the suicide attempt was a response to guards denying his request to be strip-searched by a female correctional officer.

In his blog post, Minor stated that he is losing his “essence,” and that the “Demi who wants to wear make-up and hangout with friends is not permitted here.”

He further alleged that staff at EMCF had him moved on trumped-up security risk allegations, making no mention of the two women he impregnated at the facility, something he attributed solely to transphobia in a recent interview.

“This response has happened solely because I am a woman who is transgender, and because of this, they view me as a man. They have engaged in sex stereotyping, by assuming that I am a threat to the women,” he told NJ.com.

Minor additionally accused the NJDOC of violating his right “to be safe and free from sexual harassment” by transferring him to the male youth facility.

Responding to news of Minor’s blog posts and multiple social media accounts, inmate Kokila Hiatt told Reduxx that “this is not his first foray into social media and begging for donations.” Hiatt is a female inmate currently incarcerated at EMCF, and shared a wing with Minor after his transfer in August of 2020.

“He seems to jump onto whatever will get him what he wants. First it was the transgender [issue], to come to EMCF. Now it seems to be youth incarceration since he’s in a facility typically used to house youthful and young offenders,” Hiatt said.

Minor had previously operated a website called Justice4Demetrius.org. A LinkedIn account attributed to ‘Demi’ Minor describes him as an “entrepreneur” and “criminal justice advocate,” and cites him as the founder of “a grassroots organization advocating for criminal justice reform” called The Minor Society.

In another blog post by Minor dated April 24, he asserts that he does not believe that it is necessary to undergo surgery in order to self-identify as transgender. “In fact [whether] some one does or does not choose to remove their penis does not define their gender… I realized that I needed to focus on doing things that make me happy,” he wrote.

Minor was one of five male inmates relocated to the Vulnerable Persons Unit (VPU) of EMCF on June 23.

Hiatt reports that the administrative decision to separate them from the female inmate population was motivated by the intention of protecting the women from those male transfers who were either sexually harassing female inmates, or actively seeking out sexual relationships which could result in pregnancies.

“It appears that, to protect us from the male inmates who seek sexual relationships with us, it [was] decided that [these men] will be called vulnerable and placed together in one unit,” Hiatt explained.

Another inmate at EMCF, Michelle Tierney, corroborated Hiatt’s understanding of why some of the male inmates were relocated. Tierney also speculated the move may have been a result of mounting public backlash after the announcement of the pregnancies.

From speaking with the incarcerated women, Reduxx has learned that William Baberick, Jimmy Lee Brooks, Dejshontaye Would, and Vernon Smith were the other four trans-identified inmates moved into the VPU with Minor prior to his relocation.

Both Baberick and Smith are serving sentences on charges related to robberies, while the other two are far more dangerous offenders. Brooks is a serial child sex abuser whose criminal record shows 10 counts of sexual assault against a victim under the age of 13, and Would is serving a 25-year sentence for brutally killing his 60-year-old aunt by fatally stabbing her a total of 47 times.

According to Hiatt, all of the men moved to the VPU were “seeking or having romantic relationships with the women,” something that is expressly forbidden under the New Jersey Administrative Code regulating prison activity.

“This was not without notice by staff and she was eventually moved to the West Wing in this same unit. While she was on this wing, though, they engaged in sexual behavior,” Hiatt stated.

Hiatt went on to explain that Minor was “trying to make advances on any woman if he felt the opportunity presented itself, just like any other man would do.” She described an instance when Minor approached her while she was cleaning the shower and indicated that he wanted to take a shower with her.

“The problem, ultimately, is that New Jersey is placing men in a women’s facility and their screening process is not only insufficient, but there is no way to make it so,” she says.

“I do not believe the men should be here for any reason whatsoever, and it does endanger the women in this facility … Men who come here are intending to have sex with the women. Period. And so women are subjected to their advances, aggressive or otherwise. Some of the men are outright creepy. Women who have been victims of abuse and exploitation are now having to navigate a facility where they have little to no power over their own lives, and where they are being forced to live with men who seek to exploit them for sex.”

Minor’s removal from the Edna Mahan Correctional Facility for Women comes just a year after the state reached a settlement with the American Civil Liberties Union of New Jersey.

The agreement between the ACLU and the New Jersey Department of Corrections to house transgender inmates according to their self-declared gender identity, instead of their biological sex assigned at birth, has led to 27 men, many of them violent killers, being transferred into the women’s facility.

Reduxx is your independent source of pro-woman, pro-child safeguarding news and commentary. We’re 100% reader-funded! Support our mission by joining our Patreon, or consider making a one-time donation