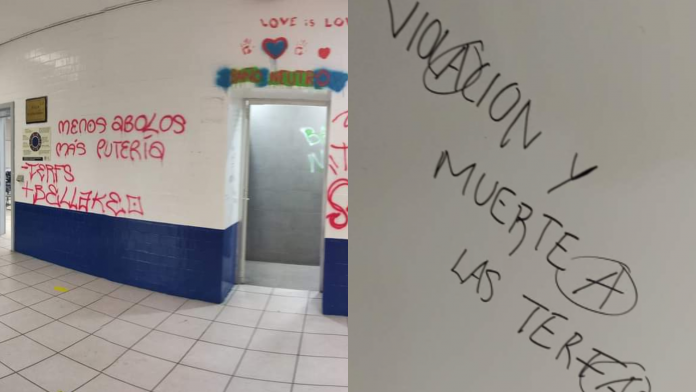 Female students at one of Latin America’s top Universities say trans activists staged a coup of a single-sex washroom on their campus, and have left some gender critical women and lesbians fearing for their lives.

On August 24, feminist students at the National Autonomous University of Mexico (UNAM) were confronted by trans activists as they painted a lesbian pride symbol on a wall near the Samuel Ramos Library. Speaking to Reduxx, a witness who prefers to remain anonymous said that the activists began hurling verbal abuse at the women who were painting the lesbian labrys.

“They called them TERFs, colonial fascists, and transphobes,” the source says, noting that shortly after, additional activists from the Queer groups on campus joined in to harass the female students. The women desperately tried to appease the crowd by talking with those who were outraged.

“The women tried to engage in a dialogue, but found that the trans activists only wanted them to paint a symbol for lesbianism they agreed with.”

Shortly after, as a result of the lesbian symbol that had been painted, the trans students reportedly declared that they “did not feel safe” on the campus and went to administrators to demand a gender-neutral washroom be established in that area.

While administrators agreed to create one, the students did not wait for it to be designated. Less than 24 hours later, the activists took over the largest female restroom, which was on the second floor of the Faculty of Philosophy.

As part of their symbolic coup, the activists vandalized the walls outside of the washroom with anti-feminist and pro-sex trade graffiti.

“Less abolitionism, more whoring,” and “less TERFs, more sex” were among the slogans painted outside of the washroom. The “female” bathroom designation was also erased and replaced with “gender neutral.”

The source within the school says that the washroom that had been seized had once been considered one of the safest for women on the campus. Sexual assaults at UNAM are so common that the University recently had to install emergency buttons inside of the cubicles of women’s washrooms.

As a result of lack of safe alternatives, as well as a reluctance to give into the demands of the trans activists, female students have continued to use the washroom, but now report lengthy wait-times and queues as male students have also taken to using the “gender neutral” facility due to its size and convenience.

In response to the bathroom putsch, some feminist students on campus attempted to mark the washroom with their own graffiti.

Photos from inside the washroom taken last week show some feminist slogans have been written on the mirrors and walls. One reads: “if you want a unisex washroom, take it from the men! Don’t violate women’s spaces,” while another asks the activists to respect the rights of female minority students.

But other photos snapped inside show violent threats have now emerged, directed at the women. One, which was menacingly placed near an assault crisis button, reads: “rape and death for TERFs.”

Feminist students reportedly tried to make the University aware of the threatening graffiti, and documented its location for administrators to have it cleaned up, but the University claimed it “couldn’t find” the violent slogans despite it being marked by the women.

The source within UNAM reported to Reduxx that administration has been ordering the removal of the feminist graffiti, but allowed those made by trans activists to remain up, including the death and rape threats.

In a statement issued on August 26, the University appeared to express support for the trans activists who had taken over the female washroom while condemning those expressing “discrimination” towards them.

“The technical council … agreed to categorically condemn any expression of hate, violence, or discrimination towards gender-diverse students,” the statement read. “This is no place for those who undermine the human rights of people who make up our community.”

Apparently emboldened by the University’s lack of action, trans activists have been targeting lesbian and feminist students in an effort to intimidate them. Gender critical women on the campus who have tried to organize formal protests against the seizure of the washroom have been faced with harassment.

“They have begun a witch hunt against lesbian feminists who belong to student organizations,” the source at the University told Reduxx. She continued that female students known to be opposed to trans activism are being particularly targeted.

“They follow [us] to the bathrooms, hoping to find [us] red-handed painting graffiti,” the anonymous source says. “They want to silence us, it is a witch hunt.”

Commenting on the incident, Women’s Declaration International Mexico representative Laura Lecuona expressed outrage at what has happened on the UNAM campus.

“UNAM, and in particular the Faculty of Philosophy, has been a breeding ground for transgender policies for years,” Lecuona tells Reduxx. “In recent months, the violence of different anti-women groups has increased. They have impunity, with the active and passive complicity of [University] authorities.”

Lecuona says the University has been actively imposing gender ideology on students, and that there has been multiple incidents of trans activists on the campus forcing the administration’s hand under threat of unrest. Lecuona explains that earlier this year, trans activists on the campus demanded that a video explaining the difference between sex and gender be deleted from the University’s systems.

“It seems that the authorities are terrified,” Lecuona says. “They make it very clear who they want to protect. Time and again, [UNAM] has shown that their campuses and faculties are not safe spaces for women.”

Lecuona alludes to the statement issued by the University, and asserts that while administration is buckling to the demands of the trans activists, feminists and lesbians on the UNAM campus have been showing tremendous resolve in the face institutional condemnation.

“Under the passive gaze of those who should be protecting our freedom… our bodies are attacked and our words are attacked. If the authorities are afraid, feminists will not be.”

Trans activism is closely related to pro-sex trade activism in Mexico. In July, a transgender politician aggressively disrupted a government conference aimed at tackling human trafficking after becoming offended at the implications abolitionist policies would have on trans “sex workers.”

Maria Clemente, a trans-identified male politician elected to Mexico’s Chamber of Deputies last year, called the suggestion that the sex trade be abolished for the protection of women and children “hate speech.” To a critic, Clemente said: “I am a woman, and I am a whore!  It’s my job and and how my family eats! I love it!”

Sex-based violence against women in Mexico is considered to be among the highest in the world, with the country’s femicide rate continuing to rise even as the general homicide rate falls. 85% of human trafficking victims in the country are female, with women and girls overrepresented in every form of the crime, including organ trafficking, forced prostitution, and labor exploitation. 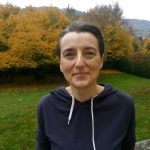 Nuria Muíña García
Nuria is a news contributor and the head of Spanish translation for Reduxx. Nuria is a passionate advocate for the rights of women and girls, and seeks to connect feminists across borders. A Spanish native, Nuria currently lives in Switzerland.
READ MORE
News