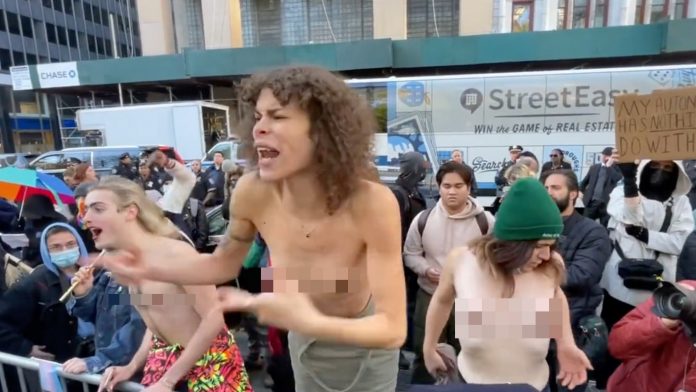 What was intended to be a peaceful demonstration held by women critical of gender ideology turned violent on Monday after trans activists showed up to oppose the women’s right to freedom of speech.

At least nine people were arrested in Manhattan during protests that broke out in opposition to the Let Women Speak event. The event is the last stop in the US tour organized by grassroots women’s rights campaigners and featuring prominent British women’s advocate Kellie-Jay Keen, founder of Standing for Women.

Before the event was even able to formally kick off, Keen announced through YouTube that she was unable to attend because she could not get to the speaking podium safely. Keen explained that police were unwilling to provide her an escort to the area where other demonstrators had gathered outside of City Hall so she could pass through the crowd of detractors safely.

Dozens of Antifa members and trans activists had gathered around the female speakers, forcing authorities to set up barricades to separate the two groups. According to Keen, an officer had initially offered to assist her but then decided against it, saying he would not “risk” placing other officers in danger by facilitating the event further.

As other female speakers attempted to carry on, giving passionate speeches on the impact of gender ideology on child safeguarding and women’s rights, the congregation of pro-trans demonstrators became increasingly agitated. In one video clip circulating on social media, trans activists can be seen surging against the barricades as police officers push back, barely able to contain the hostile crowd.

In other clips from the event, trans activists can be seen clashing with security guards and law enforcement while attempting to breach the barricades. According to the New York Post, police began arresting the counter-protesters, and 9 people in total were taken into custody. More detailed information, including whether charges have been filed, has not yet been released.

During one of the most viral incidents to come out of the event, two transgender social media influencers and models were seen hurling threats at Jeanna Hoch, a Colorado woman who has previously been targeted by members of Antifa.

Velasquez is a model in New York, and has worked campaigns for Pride NYC and Coach.

“These titties are more real than you will ever be, bitch. No man wants you!” He added, before grabbing at his exposed chest in a lewd gesture. Later, as the women’s rights campaigners were leaving the event while escorted by police and security, Velasquez angrily approached Hoch and was filmed attempting to spit on her several times.

As one participant in the event noted, women had devised a strategy of leaving the area in groups of four or five to avoid being assaulted by trans activists on dispersal.

Trans-identifying female model Casil McArthur, who stood next to Velasquez as he threatened Hoch, chanted “Nazi scum,” at the women. McArthur began modelling at the age of ten, using the name Dani Rose, but began injecting testosterone in order to medically transition at the age of 17.

In a 2016 Instagram post, McArthur reveals that she felt insecure about her body, and her breasts in particular. “I was super hesitant with a photo like this,” McArthur captioned a photo of herself standing topless, with her arms crossed. “I didn’t want to be seen in feminine lighting because of my chest.” McArthur would undergo a double mastectomy to remove both of her breasts shortly after the photo was taken.

In another disturbing encounter, an unidentified transgender male made lewd gestures towards Karen Davis, a pro-woman YouTuber and advocate.

Separated by a police officer, the man called Davis sexist and obscene slurs before threatening to release her private information online in an attempt to intimidate her. The man made several disturbing gestures towards Davis, who was heard asking police why they were tolerating his threats towards her.

One trans activist who was on the scene estimated that there were approximately 200 counter-protesters before police appeared in greater numbers.

Following the arrival of the NYPD’s Strategic Response Group, the counter protest was declared an unlawful assembly and law enforcement began to make arrests.

The US tour of British women’s rights advocate Kellie-Jay Keen has been marred by multiple incidents of violence in what has been a worrying trend where women critical of gender ideology are being targeted by trans activists.

Keen’s appearance in Portland, Oregon had to be cancelled on October 25 after credible threats were received. Despite Keen’s absence, a small group of women carried out an unofficial demonstration in the event’s place as an act of resistance.

As the women spoke, multiple masked men rushed their area and pelted them with whipped cream pies.

On October 26, the event in Tacoma, Washington was quickly derailed by violent trans activists and Antifa. Multiple physical altercations were recorded, with some trans activists showing up wearing brass knuckles and attempting to grapple female speakers to the ground during their speeches.