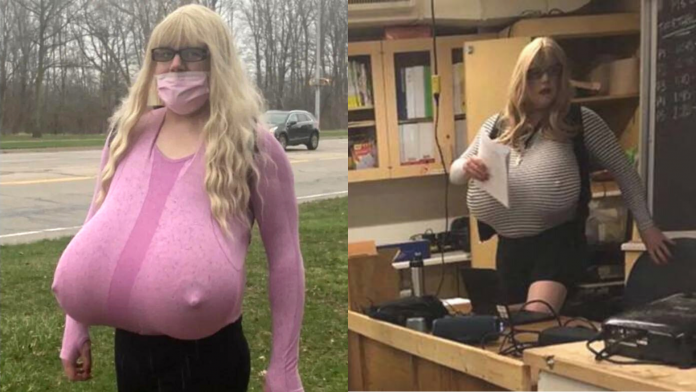 Top administrators at a controversial school board in Ontario have released an information report rejecting the possibility of implementing staff dress code. The report comes just weeks after widespread backlash over one of their transgender teachers donning large fake breasts in front of students.

On November 9, the Halton District School Board (HDSB) held a Board of Trustees meeting to address routine school operations. During the meeting, a special report was presented in which assessment was made of human rights and legal considerations for a dress code enforcement among HDSB staff.

The report was related to a September 21 school board motion requesting the Director of Education investigate whether it would be possible to implement a workplace dress code The motion had been proposed following international backlash over Kayla Lemieux, a teacher at Oakville Trafalgar High School.

Images and videos of Lemieux wearing what appeared to be a massive prosthetic bust, complete with protruding nipples, had gone viral on social media in September. Lemieux was seen donning the inappropriate gear while instructing classes.

According to students at Oakville Trafalgar, Lemieux had reportedly begun identifying as transgender in 2021. While Lemieux’s intentions have been the subject of debate, a YouTube video of a tech class uploaded by Lemieux demonstrated he had been presenting himself in this way since at least May — months prior to any widespread public knowledge.

Reduxx was first to confirm the origin and identity of the viral media, and the subsequent backlash resulted in Oakville Trafalgar becoming a hotspot for international media coverage and local protests as many noted Lemieux’s prosthetic breasts were inappropriate for a school setting.

Shortly after news of Lemieux’s appearance began to spread, the Halton District School Board issued a hasty email to the families of students at Oakville Trafalgar which appeared to defend Lemieux.

“We are aware of discussion on social media and in the media regarding Oakville Trafalgar High School. We would like to take this opportunity to reiterate to our community that we are committed to establishing and maintaining a safe, caring, inclusive, equitable and welcoming learning and working environment for all students and staff,” the email read, then deferring to the Ontario Human Rights Code.

“We strive to promote a positive learning environment in schools consistent with the values of the HDSB and to ensure a safe and inclusive environment for all students, staff and the community, regardless of race, age, ability, sex, gender identity, gender expression, sexual orientation, ethnicity, religion, cultural observance, socioeconomic circumstances or body type/size.”

Some noted that students at HDSB schools were subject to a dress code which explicitly forbade the display of genitals and nipples, and that it appeared Lemieux was being given special privileges due to his “gender expression.”

At the time, Canadian journalist Jon Kay noted that Lemieux’s attire was most commonly associated with a type of computer-generated animated pornography from Japan known as bakunyū, or, “exploding milk/breasts.”

Following sustained outrage, the Halton District School Board unanimously passed a motion on September 21 requesting a review into whether it would be possible to implement a workplace dress code.

On November 8, the information report associated with the review was completed and submitted to the Board of Trustees, and presented at the Board meeting the next day.

In the report, the HDSB Superintendent of Human Resources, Sari Taha, and Director of Education, Curtis Ennis, wrote that the implementation of an enforceable dress code with respect to employee professionalism would “expose the Board to considerable liability.”

Taha and Ennis provided an analysis of the labor law and human rights code considerations if the Board were to establish a staff dress code, placing special emphasis on gender identity.

” … it is important to recognize the impact that dress code policies can have on members of
the transgender community. Most notably, it is important for employers to make allowances to
ensure that these employees are able to express themselves in accordance with their lived gender.”

It continues: “Even if a dress code is implemented for non-discriminatory reasons, it would likely be found to be discriminatory where it adversely affects an employee or group of employees on the basis of their Code protected grounds.”

The report concludes by dismissing the possibility of a dress code as having any impact on the professionalism of staff, writing: “… we note that if the employer desires to foster a culture of professionalism, respect, equity and inclusion, a truly reasonable and non-discriminatory dress code or grooming standards would most likely fail to yield the intended results.”

During the November 9 School Board meeting, Taha, who had co-authored the report, firmly rejected the implementation of a dress code, citing an undue burden on “women and persons of the other identity community.”

Following Taha’s presentation of the report, HDSB Trustee Tanya Rocha clarified with Tara that implementing a dress code policy for staff would “fail” and be a step backwards.

“All other institutions are removing dress codes and there really is no need for one here… and if we even tried, it would not pass all of the litmus tests you mentioned,” Rocha said.

To another trustee, Taha stated: “Inherently, dress codes are adversely impacting women and other groups, disproportionately.”

The Halton District School Board has received ample criticism for their handling of the situation with Lemieux. Despite widespread outrage, Board members have explicitly refused to comment on the appropriateness of Lemieux’s attire, and have defended his right to wear the prosthetic breasts on multiple occasions.

The sole statement HDSB has made in relation to the Lemieux situation was on September 20, when the Board clarified that the name “Stephen Hanna” had been incorrectly circulated as being associated with the individual in the photos and videos.

HSDB also declined to confirm the identity of the individual as being Kayla Lemieux, but Reduxx had verified that name through Oakville Trafalgar’s own staff directory and associated G-suite profiles.

Since September, HDSB has refused repeated requests to provide Reduxx with Lemieux’s Ontario College of Teachers registration number, which is intended to be public information.

Lemieux is reportedly still wearing the prosthetic breasts on a day-to-day basis.