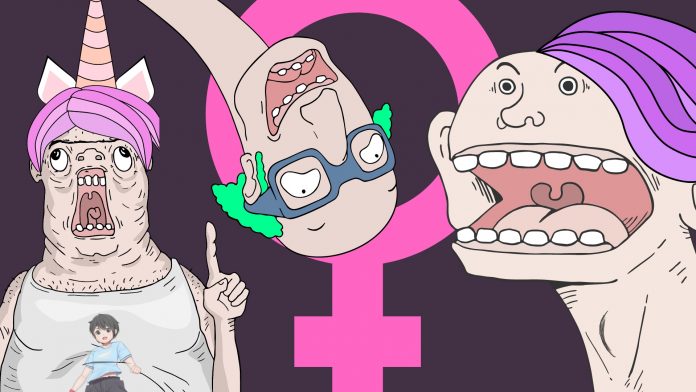 International Women’s Day is rapidly approaching, and you know what that means: The trans industrial complex is going to have a conniption trying to ensure it is all about them.

This shouldn’t come as a surprise. We do this every year. It is almost a scheduled song and dance now. The moment anything intended or exclusively for women comes into public circulation, it is snatched and dissected until it is sufficiently inclusive so as to satisfy our scrotum-owning sisters.

One would almost wonder if, despite their claims otherwise, they considered themselves women at all, with how hard they work to utterly decimate anything intended for women and open it up into a veritable free-for-all. Don’t think about it too much.

No need to wait until March 8, the testosterone-induced rage has already begun with the ringing in of Women’s History Month, which is celebrated from March 1 to March 31.

To honor the month, HealthLine released an article calling for the celebration of the Transgender Day of Visibility, which is apparently celebrated on March 31… for some reason. The article announces it will be celebrating the “gift” of trans lives with various trans-centric features throughout the month.
Note that Trans Awareness Month is in November, as are as most transgender issue-related celebration days including Transgender Parent Day and Trans Awareness Week.

Pronouns Day and Genderfluid Visibility Week are celebrated in October. Non-Binary People’s Day is in July. There are a peppering of other “days” and “weeks” referring directly or indirectly to transgender people throughout the year in different months… But a single day, the Transgender Day of Visibility, has randomly been plopped right at the end of Women’s History Month.

But HealthLine is hardly the only example of celebratory trans-washing I’ve witnessed so far.

The Wicklow Libraries in Ireland is hosting a Women’s History Month speaking event, and who have they invited to talk on womanly things? Well, a man, of course!

Sara Phillips, a biological man who identifies as a woman, will be the keynote speaker a this International Women’s Day-themed event where he will be discussing a “variety of topics, in particular those that affect transgender women in terms of inclusion.” It is perhaps worth noting that Phillips is a member of the Transgender Equality Network Ireland, which seems to have terrible trouble revealing how they are using the massive bags of government gold they are being provided.

Another mega-organization is similarly spending Women’s History Month focusing on all the most important elements of womanhood — Kink and pronouns!

The LGBT Foundation in the U.K. has an income of just over £3 million per year, and is spending the genderfluid bills hosting a week called “Sugar and Spice” wherein “LGBT+ women” will be invited to “celebrate their amazing selves” by learning about kink with Aben (he/they) or about trans feminism with Emily (she/they) and Eden (she/xe). Naturally, “LGBT+ women” includes “trans women and non-binary/genderfluid peoples wishing to access a woman-centered space.”

And who could forget the University of Cork’s Lesbian Lives Conference 2022, which just wrapped up its Women’s History Month-based seminars today, in which a biological male was invited to give a keynote speech on lesbianism.

Shift into the mid-month, and the Canadian Union of Public Employees will be sponsoring a trans-led panel on that very important Women’s History Month subject of “combatting anti-trans hate.” One of the speakers will be Niko Straits, a trans-identified male who is probably best known for repeatedly defending pedophile Johnathan “Jessica” Yaniv during his racist tirade against salons owned by (primarily Muslim and Sikh) women of color.

Hop back over to Europe, and the Hogeschool Inholland University in Alkmaar, Netherlands is hosting a pornographic drag queen for their International Women’s Day celebrations.

The point: Women can’t have shit.

And even when women have tried to carve out celebrations specifically for them — female human beings — or even simply assert their right to have such exclusive moments, they have been met with brutality.
Just last year in France, “trans exclusionary” feminists protesting sexual exploitation on International Women’s Day were met with violence. The 15 or so feminists who turned up at a monument park with simple placards denouncing the sex trade and pornography were shoved, egged, and sprayed in the eyes with red paint.

Their signs were defaced, and death threats aimed towards them and any other woman who happens to not be “inclusive” enough were striped on the public statue they had been protesting by.

The sad part is, this isn’t even surprising.

We have long past breached the point of mass psychosis on the trans issue, with dead-eyed goons combing through and honing-in on even the mildest comments to determine whether the mere mention of female was made with an exclusionary intention. Remember what happened with Adele? Simply declaring she was proud to be a female artist was enough to have the gender zombies seizing into intellectual rigor mortis.

Likewise, prisons, rape crisis shelters, and athletics have become ground zero for the apparent obligation women have to make sure males feel comfortable and validated at all times. Regardless of the danger or disadvantage women and girls must suffer the consequence of, daring to mention females might have unique needs or experiences males cannot ever replicate is akin to sacrilege.

And, of course, how long have we been wrangling with the multi-headed emergence of “inclusive language” when referring to female anatomy? Chest feeders, menstruators, uterus havers, birthing bodies, vulva owners — the list of terminological diarrhea is endless.

This is not simply erasure. This is a full blown invasion.

What is needed now is not simply frustration, annoyance, or eye-rolling — but something akin to a total de-colonization. We are operating in occupied territory that needs to be ruthlessly and unapologetically re-claimed. No one is coming to do it for us and time is of the essence.