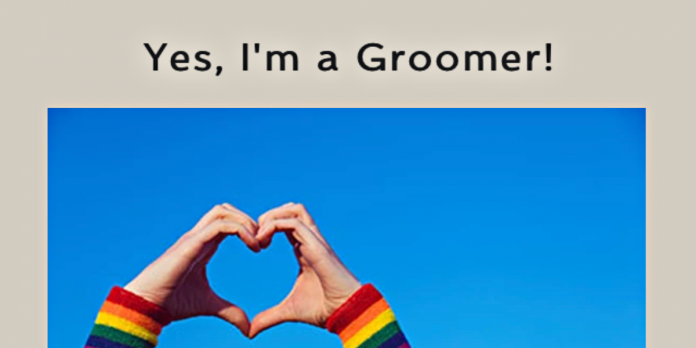 Confusion and outrage is swelling on social media after an author and theologian published a blog post proudly declaring, “Yes, I’m a groomer!”

On May 2, Suzanne DeWitt Hall, author of the critically acclaimed children’s series Rumplepimple Adventures as well as a number of books on ‘gender-queer’ theology, released a blogpost titled “Yes, I’m a Groomer!” in which she attempts to “take back” the word groomer, as it “has plenty of good, useful, healthy meaning.”

Hall draws from her experiences as a guest preacher at Allendale United Methodist Church, a progressive church in St. Petersburg, Florida known for its vocal activism on various social justice issues.

On the ‘Children of Allendale‘ section of its official website, the church displays multiple photos of children engaged in the activism, including protesting with placards for causes related to immigration, against Donald Trump, and for recognizing “pronouns.” In another photo, the church shows a drag queen reading stories to kids during service.

In her blogpost related to her time at Allendale, Hall says: “We all groom kids. Anyone who has a beloved child in their life is a groomer.”

While Hall claims there are positive connotations that can be associated with the word, the act of child grooming is categorically defined as “befriending and establishing an emotional connection with a child, and sometimes the family, to lower the child’s inhibitions with the objective of sexual abuse.”

In the tweet promoting the blog post, Hall used the hashtags #GroomersGonnaGroom. Her flippant take on the subject wasn’t well-received, with a wave of backlash swelling in response.

“These people want to psychologically and medically harm children, and they’re willing to say so openly and without shame,” one user said in reply to Hall’s tweet, with another writing “admitting you have a problem is the first step.”

With the rise of accounts like Libs of TikTok, where teachers are often put on display boasting about shoehorning “queer” themes into curriculum, the word ‘groomer’ has come into widespread use on social media lately.

The word has also been used against proponents of ‘transgender kids,’ those who support the often no-questions-asked social or medical transitioning of young children.

On May 1, prominent detransitioner and advocate Helena Kerschner wrote on Twitter, “the trans groomers who love bomb teens into estrangement from their family, telling them that they will love them more than their parents do, are never there to pick up the pieces when it creates destruction and suffering in that young [person’s] life.”

In January, a California mother filed a lawsuit against the Spreckles Union School District, alleging teachers had convinced her 11-year-old daughter to identify as transgender and change her name.

Jessica Konen said two middle school teachers at Spreckels Union School District who ran an Equality Club — later renamed to UBU (You Be You) — suggested to her daughter that she was bisexual in 6th grade, and then subsequently manipulated her into believing that she was transgender.

Konen had not known her daughter had begun identifying as a boy and using a male name until she was called to a meeting at the Buena Vista Middle School principal’s office in December 2019. At the time, her daughter was in 7th grade.

But Konen hadn’t questioned how her daughter was being influenced by staff and teachers until Abigail Shrier published the contents of a leaked recording from a California Teachers Association conference.

In the recording, her daughter’s teacher Lori Caldeira and another teacher named Kelly Baraki were discussing their tactics for keeping UBU meetings private and described how they “stalked” students to recruit.

“When we were doing our virtual learning — we totally stalked what they were doing on Google, when they weren’t doing school work,” Baraki said. “One of them was googling ‘Trans Day of Visibility.’ And we’re like, ‘Check.’ We’re going to invite that kid when we get back on campus.”

The lawsuit alleges both Konen and her daughter, who has since ceased identifying as a boy, have suffered “severe emotional distress, mental anguish, psychological damage, and damage to their family’s dynamic.”