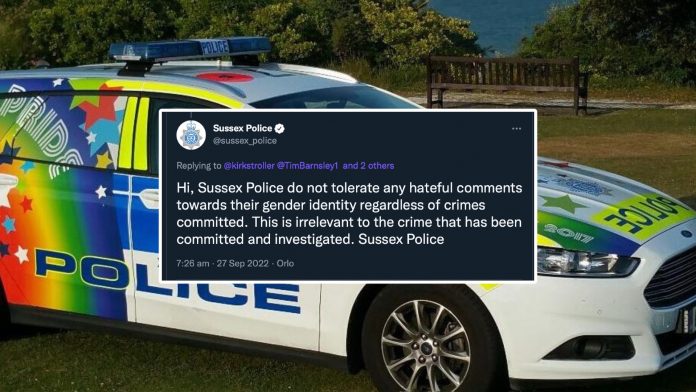 Sussex Police have come out in defense of a recently-sentenced serial pedophile following “hateful” comments about his gender identity on Twitter, prompting widespread mockery and frustration from onlookers.

On September 26, Sussex Police issued a status update on a case from earlier this month. The update was related to the sentencing of a serial pedophile on September 6. As Reduxx previously reported, John Robert Dixon was sentenced to a minimum of 12 years in prison following a conviction on 30 charges related to the sexual abuse of multiple children.

Dixon, 58, carried out abuse against five girls and two boys from 1989 to 1996, the youngest victim being 7 years old at the time. In 2004, Dixon began identifying as a woman named Sally Anne.

In July, a jury had found Dixon guilty on 30 counts of indecent assault and indecency with a child for what was described as a campaign of sexual abuse against the seven victims. According to the Daily Mail, case prosecutor Ryan Richter labelled Dixon a “brazen and callous sexual predator” who exploited young males and “cultivated a toxic relationship” with the female victims.

The pedophile preyed upon children he had come to know through family connections, grooming them into trusting him. Some of the children were abused for months at a time, with Dixon victimizing them in his lock-up garage or caravan.

Disturbingly, it was determined by a court during sentencing that Dixon would be sent to a women’s prison. This is despite the fact he had not legally changed his name or gender.

In mainstream media reports of Dixon’s conviction, he was uniformly referred to by feminine pronouns. Sussex Police similarly called Dixon a “woman” in the September 26 case status update that began making the rounds on Twitter last night.

Following the circulation of the update, many women’s rights advocates on Twitter took to calling out Sussex Police for the blatant obfuscation of Dixon’s sex, with many users tagging the force in an attempt to make their concerns known.

Earlier today, Sussex Police began responding to people frustrated with the lack of accurate information in the update, issuing a scolding reply to at least three Twitter users in which they condemned “hateful comments” towards Dixon’s gender identity.

Hi, Sussex Police do not tolerate any hateful comments towards their gender identity regardless of crimes committed. This is irrelevant to the crime that has been committed and investigated. Sussex Police

The replies quickly attracted massive backlash, with Twitter users gathering beneath the responses to condemn Sussex Police for issuing what many users noted appeared to be a thinly-veiled threat that hate crime charges could be pressed against dissidents.

“Sounds like you’re threatening a woman for correctly identifying a convicted paedophile as a man. Something you seem unable to do. Perhaps rethink your career choice. The public would like some honesty and decency from police for a change,” user Mel Johnson wrote.

“Sussex police took 33 years to arrest and convict a man who was sexually assaulting children in my home town, but 7 minutes to threaten me for ‘hatefully’ referring to him by his actual sex. Sussex police need a change in leadership and a new social media team,” another user said, after Sussex Police had responded directly to their “hateful” post about Dixon.

As “hateful comments” are dubiously illegal under United Kingdom law, some users began pressing Sussex Police on whether their response suggested users could be subject to hate crime charges if they continued to express their opinions on Dixon.

The force responded with a link to their website describing what a hate crime is, and encouraging people to ensure their “gender critical views” are “not targeted at an individual.”

The United Kingdom has long been seen as ground-zero for much of the gender ideology debate, with stories routinely emerging from the nation about women being arrested or criminalized for not adequately validating a trans-identified male’s identity.

In 2019, a mother in Hertfordshire was arrested in front of her children and held for over 7 hours after being reported for “misgendering” a man who identified as a woman on Twitter. Kate Scottow’s conviction was ultimately overturned on appeal the next year, but was just one of many similar cases that would emerge.

Scottish feminist Marion Miller was charged with a hate crime after posting a photo of a suffragette ribbon on her social media. She ultimately won her case, with all charges against her being dropped. That same year, Maya Forstater, a think-tank researcher, won her years-long battle at an Employment Tribunal after losing her job over allegedly “transphobic” tweets.

Earlier this year, Sussex Police was praised as being “among the most inclusive” forces in the United Kingdom, with figures showing that almost 10% of their officers identified as gay or lesbian.

In 2020, Sussex Police refused to respond to a request for spending information which would reveal how much money they spent on LGBTQ-Pride themed items. This was a year when it was found multiple forces across the United Kingdom had spent a total of almost £100,000 on rainbow accessories.

A few years prior, Sussex Police had spent almost £1,000 of public money wrapping just two of their police cars in rainbow colors for a gay pride parade.