Trans Musician Calls for Murder of JK Rowling and “TERFs” 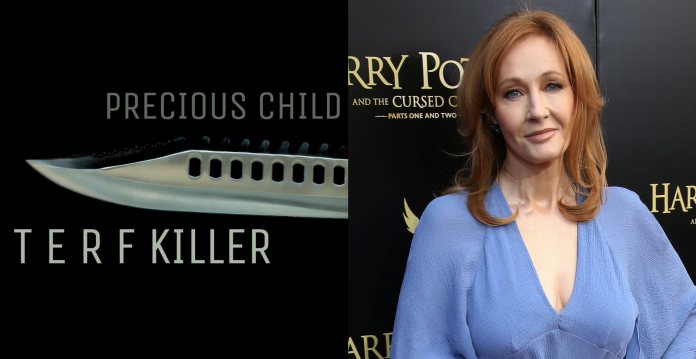 A trans-identified musician who was at the center of the Wi Spa controversy has released a music video calling for the murder of feminists. Precious Child, who was profiled sympathetically by The Guardian last year, dedicated the violent music video to acclaimed author JK Rowling.

“This song and video is dedicated to every single filthy TERF and MRA in existence. Special shout out to JK Rowling! All billionaires are trash but you’re special,” the musician wrote in the video description.

The video, titled TERF Killer, features images of bullets and of a knife stabbing into the air before the words “kill a TERF today” flash repeatedly across the screen.

Precious Child first came to the attention of media in June of 2021 after the Wi Spa incident, which made international headlines after a woman filmed herself questioning staff about the presence of a naked man in the women’s area of the spa. According to the woman, the man was “slightly erect” and in full view of women and children.

“It’s okay for a man to go into the women’s section, show his penis around the other women, young little girls — underage — in your spa?” she asked a spa cashier. A video of her confrontation with staff went viral after she uploaded it to her Instagram account, and it was quickly distributed across social media platforms.

In a now-deleted post from his Instagram, Precious Child appeared to suggest he was the trans-identified male who had been at the spa that day, resulting in online commentators repeating that claim.

“I have been called a ‘vile monster trans’ for allegedly using the women’s section of a nude spa in Los Angeles,” Precious Child wrote, “Thankfully, that would be protected under California law.”

After Precious Child came out and stated he was not the individual who had been at the spa, mainstream media outlets were quick to decry the video as a “transphobic hoax” and a demonstration was staged by trans activists on July 3.

Precious Child was among the counter-protesters and took to social media to promote the demonstration.

“Los Angeles – stand with me this Saturday against this anti-trans protest at Wi Spa! To be clear, I’m pro-human-body in all it’s manifestations. Genitals are a non-vestigial component of life. I’m also sick of children being leveraged for apathetic moral agendas,” he tweeted days before.

During the protests, a lesbian woman was surrounded by a crowd that screamed at her to “go home” and called her transphobic. Gaye Chapman, owner of After Ellen, a site for lesbian and bisexual women, was shoved and had water poured on her.

After Precious Child received backlash for appearing to claim responsibility for the Wi Spa locker room incident he reportedly received a flood of abusive messages, leading to a Guardian article being published with the headline, ‘A Nightmare Scenario: How An Anti-Trans Instagram Post Led To Violence In The Streets.’

While many outlets maintained the original Instagram video was a “hoax,” in August, a male was charged by the Los Angeles Police Department in relation to the incident, and he was soon revealed to be a serial sex offender.

Darren Agee Merager, a convicted criminal with a long record including indecent exposure, was identified as the man who entered the women’s section while nude. LAPD issued a community notice stating that Merager would “claim to identify as female” in order to gain access to women’s locker rooms.

According to law enforcement, Merager is a tier-one registered sex offender with two prior convictions of indecent exposure that took place in 2002 and 2003 California. Then, in 2008, he was convicted for failing to register as a sex offender.

Merager had previously been banned from Wi Spa in 2019 due to complaints of having an erection in the women’s section, yet was able to enter in 2021 on account of wearing a mask. Speaking to the The New York Post, Merager insisted that he was the victim and referred to the multiple warrants for his arrest as “kidnapping.”

Around the same time Merager was identified, Precious Child released a music video titled Tear Up, in which he is seen assaulting women in a spa locker room with a large, phallic weapon. After he attacks them, they swoon adoringly over his body. The track was an advance release from his album “AR-15s for Transgender Teens” which was released in February of 2022.

Another track, TERF Killer, was released “in honor of the Wi Spa anniversary” and with a “special dedication to JK Rowling and gender critical fuqs [sic].” Precious Child also targeted Rowling in June when he posted a video clip to his Instagram which featured a trans pride badge which read: “JK Rowling would like fans to stop making plans for her death.”

This is hardly the first incident involving violent threats aimed at JK Rowling in recent weeks.

On July 1, Rowling set off a firestorm of concern from netizens after uploading a screenshot of a disturbing tweet that had been directed at her from June 14.

Originally posted by user @fuckfinegael, the quote retweet featured two images — one of Rowling with her address overlayed on her face and a pipe bomb in the corner, and the other of an Improvised Munitions Handbook. The guide, originally published by the US Army in 1969, was created for the purposes of teaching soldiers how to create explosives and weapons using limited resources.

On July 3, Reduxx revealed the individual behind the account that had threatened Rowling was an Irish social justice activist who had been certified in suicide prevention.