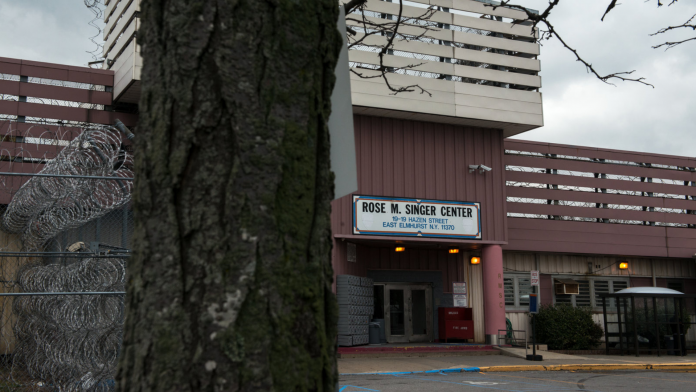 A trans-identified male inmate at Rikers Island has been convicted of raping a female prisoner while in the women’s section of the New York prison. Ramel Blount, 33, who uses the alias Diamond Blount, was sentenced to seven years after accepting a plea deal for a lesser charge of attempted rape.

While housed in the female facility, Blount approached a 33-year-old woman in the bathroom at the Rose M. Singer Center of the Rikers complex on February 8, 2021. The victim had just finished showering when Blount grabbed her by the neck, held her down and sexually assaulted her.

The unidentified victim reported the attack and the results of a rape kit matched Blount’s DNA. Blount was initially charged with first-degree rape, sexual misconduct, first-degree sexual assault, and sexual touching, but accepted a plea deal on April 7, 2022 for attempted rape. He was handed a seven-year sentence with an additional eight years of post-release supervision. He will be required to register as a sex offender, and an order of protection was issued.

Blount had been incarcerated on charges of misdemeanor assault when the attack took place. On August 10, 2018, Blount attacked a man who was walking along the Hudson River. The motive for the attack was unknown, but presumed to be robbery. Local news outlet The Villager reported Blount as a “woman” at the time.

Prior to the Hudson River assault, Blount had also been arrested on charges of robbery and assault in 2012 after beating a man outside of a gay bar in front of the Stonewall Inn.

Current New York Department of Corrections Records show Blount is now housed at the Vernon C. Bain Center of Rikers, which is a male facility. It is unknown when he was transferred.

In a press statement issued on April 25, Bronx County District Attorney Darcel Clark said, “Sexual violence against anyone is unacceptable,” but did not address the unique circumstances of the rape only having been possible because a trans-identified male had been housed with vulnerable women.

In January of 2021, New York Governor Kathy Hochul proposed a policy that would allow trans-identified male inmates in the state to be transferred into women’s prisons on the basis of a self-declared “gender identity.”

New York City adopted a policy on transgender inmates in 2018, with inmates being housed based on their self-declared gender identity unless the outcome of a federally required safety assessment or the preferences of the inmate require alternative housing.