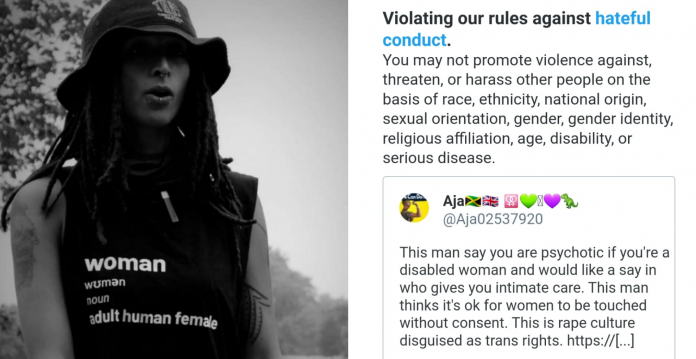 Women’s rights advocates on Twitter are outraged after a UK-based feminist was permanently suspended for challenging a trans activist who called women “psychotic” for advocating for single-sex spaces.

On July 12, Aja, a popular British feminist and poet, found herself permanently banned from the Twitter platform after what she believes was a targeted “mass report” campaign against a benign tweet she had made in response to a trans activist.

“I only realized when I checked my WhatsApp and people were asking if I had been suspended,” she told Reduxx, noting she soon after received an email from Twitter with the reason for her suspension.

Aja had made a quote-tweet in response to a male trans activist who called women concerned about the impact of gender ideology on their rights “psychotically hung up” on it.

it’s one issue though, and a really stupid one to get psychotically hung up on. You’ll be happier and might actually achieve something good for people if you switched your monomania to disability advocacy.

In the post that got her banned under Twitter’s “hate speech” Terms of Service policy, Aja wrote: “This man say[s] you are psychotic if you are a disabled woman and would like a say in who gives you intimate care. This man thinks it’s ok for women to be touched without their consent. This is rape culture disguised as trans rights.”

Once word of Aja’s suspension began to circulate, the hashtag #TwitterHatesWomen started to trend in the United States and United Kingdom, with feminist activists and allies expressing outrage at the apparent censure.

Standing For Women, an official information page which often communicates on behalf of women’s rights activist Kellie-Jay Keen, posted a video from Aja presenting a poem she had created in wake of her suspension. In the poem, Aja calls out gender ideology as “a white man’s game.” The video has over 18,000 views at the time of this article’s writing.

“If you’re black and a woman and you’ve fallen for this crap, then I hate to say this, but you should be ashamed because you’ve been played,” she recites, “Have you heard how they compare us to men? Let me say it like this so it sinks in. If your black mum can be a woman then so can a him?”

Responding to the video posted by Standing for Women, Julie Scott tweeted: “Just when you think Twitter can’t sink any lower, it bans a woman for saying that a man calling disabled women ‘psychotic’ for wanting a say in who provides their intimate care is an example of rape culture.

Many other users compared the treatment of Aja’s post to the recent debacle with the disturbing pipe bomb threat that had been directed at JK Rowling.

“You allow death threats against [JK Rowling] to stand and yet you suspended this woman for speaking the truth about sexism and racism and its links with gender identity politics. This is disgraceful,” Jo Phoenix tweeted. The tweet Phoenix referenced, originally posted by an Irish trans activist Shane Murray, had been left up for two weeks prior to Rowling calling attention to it, the backlash causing Murray to flee the platform.

Speaking to Reduxx, Aja says she had been expecting Twitter to action on her account for a while, but admits to being surprised it was that tweet in particular which prompted action. Aja explains her anticipation of a ban had come from seeing feminists suspended for small infractions.

Aja points out that the original tweet she had been responding to is still up, demonstrating a clear bias in Twitter’s policy enforcement.

While Aja has appealed her suspension, she says she isn’t particularly upset if she winds up losing her account permanently. She credits her frequent offline activism as being a major support system for her that softened the blow, and encourages other women to take steps to grow their offline network.

“I’d like to say to women that if they can go to meetings and find groups to join, definitely make an effort to… They can’t take away our voices in real life.” 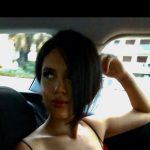 Lavy Shwan
Lavy is former contributor at Reduxx. She lives on the West Coast, where she is currently taking a break from politics.
READ MORE
News